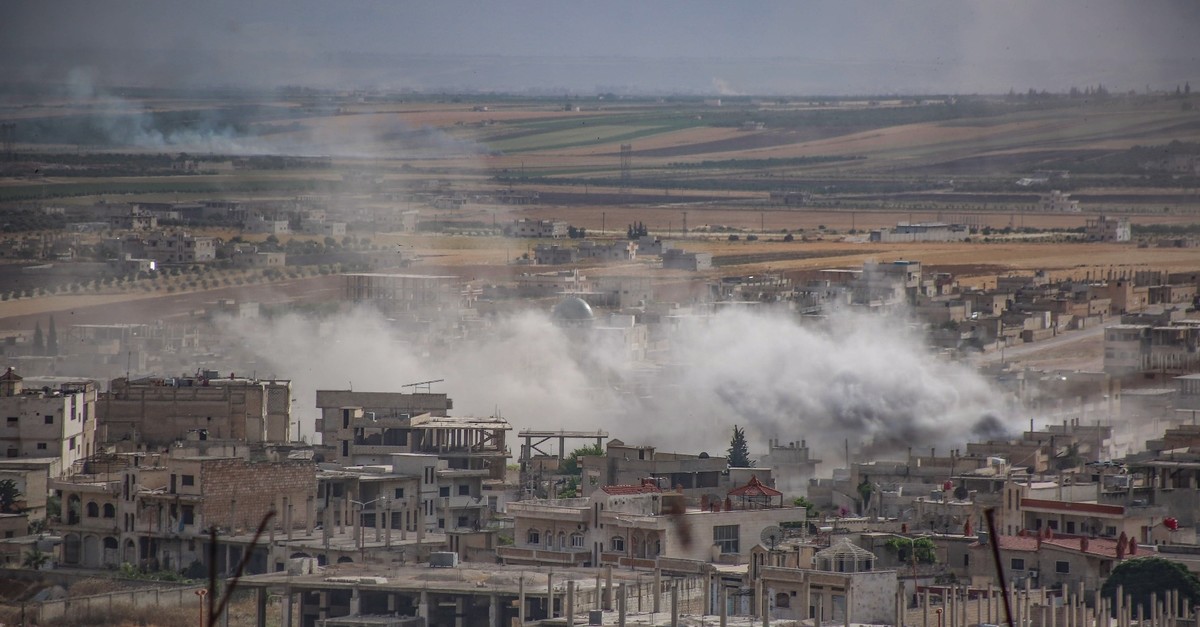 Plumes of smoke rise following reported Syrian regime forcesu2019 bombardment of the town of Khan Sheikhun in the southern countryside of Idlib province, June 5, 2019.
by Şeyma Nazlı Gürbüz Jun 07, 2019 12:12 am

As the international community remains silent about the ongoing humanitarian crisis in Idlib, Russia's passive stance comes to the fore as it has responsibilities stemming from the Sochi deal to prevent violence in the region

Since April 26, the international community has been exposed to a daily flow of news giving information on the regime's attacks in the northwestern Syrian province of Idlib, as well as the stories of people who have been suffering. While this news has left us, as average individuals, with the burden of feeling helpless in the face of yet another humanitarian crisis, international actors seem to also prefer to stay silent despite the potential power they possess.

Out of them all, however, the ongoing silence of Russia comes to the fore since the country, which was one of the two parties in Sochi deal signed with the aim of bringing peace to the province, not only does nothing to prevent the crisis but also fuels it with ongoing regime support while its partner in the deal, Turkey, continues to constantly search for a solution.

"Idlib is the black hole of Syria," Çetiner Çetin, an Ankara-based journalist who focuses on the developments in the region, said, pointing at the scale of the violence in the region. "The question is, who benefits from such a situation?" he asked, adding that in his opinion, Russia does not feel the need to take action to prevent the escalating humanitarian crisis in Idlib.

"It does not say anything to stop the regime forces," he explained, "and now, we are discussing the pre-Sochi deal scenarios once again," referring to a possible regime offensive in the region that caused major concern in the international community prior to the Sochi deal.

The Sochi agreement was reached on Sept. 17 by President Recep Tayyip Erdoğan and his Russian counterpart Vladimir Putin. According to the agreement the cease-fire in the Idlib region will be preserved, with the withdrawal of heavy arms and radicals from the region. Prior to the agreement, the Assad regime was signaling a grand operation on Idlib, which is the last stronghold of the opposition, sparking deep fears in the international community of a new humanitarian crisis.

Following eight months of calm provided by the Sochi deal, the regime has intensified its attacks since April 26 under the pretext of fighting Hayat Tahrir al-Sham (HTS) militants holed up in Idlib. The intermittent attacks and bombardments have killed, wounded and displaced thousands. Residential areas have been destroyed by indiscriminate attacks, while numerous educational facilities, health facilities and residential areas collapsed or have become unusable after being targeted by bombs.

According to Abdullah Ağar, a former military officer and security expert, in order to comprehensively understand Russia's actions in the region and the situation in Idlib, one needs to look beyond the obvious. "I believe that Turkey-U.S. relations are quite effective in determining Russia's actions in the region," Ağar said. He emphasized that, "As Ankara gets closer with Washington, Moscow uses Idlib as leverage and watches the province being destroyed," implying that Russia uses regime attacks to benefit itself. Although there are many issues at stake when it comes to the relations between Turkey and the U.S., such as the purchase of S-400 missiles from Russia, the two countries are still close allies as they both are members of NATO and share various common interests.

Currently, Russia has been actively supporting the regime's attack in the region by conducting its own attacks. It can be easily determined whether an attack was carried out by Russians or regime air forces in Idlib since the regime's Russian warplanes are outdated and are unable to carry out high-altitude attacks.

They descend, get closer to the target and only attack wide areas. Since there are no pinpointed attacks and a large amount of ammunition use, the damage spreads over a wider area. Furthermore, regime warplanes make a lot of noise while descending.

While Turkey expects Russia to stand against the regime attacks as is its duty under the scope of the Sochi deal, Russia has taken no responsibility and expects Turkey to handle the situation by itself.

With these expectations, Turkey is in close talks with Russia over the latest developments in Idlib. "We continue our contact to stop this drama as soon as possible, to ensure the safety of people, reinstate the cease-fire and bring stability to the region," Turkish Defense Minister Hulusi Akar said last week.

Akar stressed that Ankara expects Moscow to use its influence on the Assad regime to stop the ongoing onslaught that has killed hundreds of civilians in the opposition-held enclave in recent weeks. He added that Turkey is continuing its efforts toward the de-escalation of violence in Idlib on the ground within the framework of agreements made in summits held at Nur-Sultan, previously called Astana, and Sochi.

Turkey is not the only actor in the region that is full of expectations from Russia when it comes to providing peace in Idlib. On Monday, U.S. President Donald Trump called on Moscow to stop bombing the opposition-held province. The call of the U.S. president received an immediate reaction from Moscow, as Kremlin spokesperson Dmitri Peskov said that it is Turkey's responsibility to do so.

However, Ağar expresses that it is not realistic to expect Turkey to handle the situation by itself. "In Idlib, there are groups defined as 'radical' by almost everyone, and they number approximately 50,000. How can Turkey get them under control by itself?" Ağar asked.

"For Turkey, the possibility that 1.5 million people could turn up at its borders at any time is a great concern," Çetin highlighted.

Apart from the airstrikes, the Bashar Assad regime has eradicated the production of farmers in the region by burning plantation areas in the borders of the Idlib de-escalation zone. Regime forces have been accused of using napalm in the northern and western rural areas of Hama and Idlib's southern rural areas, preventing farmers from collecting their products, which eventually causes thousands of civilians to go hungry.

According to information provided by the White Helmets civil defense group, other than attacks on farmland there have been over 24 attacks on health facilities, six attacks on civil defense centers, 29 attacks on schools and much more on other civilian infrastructure in the past month, where the number of fatalities has exceeded 250 during the regime's indiscriminate attacks targeting civilians and residential areas. Civilians had to flee their hometowns in both northern rural Hama and rural southern Idlib.

As a result, over 307,000 people have been displaced in the past two months with the majority in the past four weeks, and over 200,000 of them are living in the open with no shelter, as internally displaced sites close to the Turkish border are extremely overcrowded and already running at double capacity.

Since Turkey is already hosting almost 4 million Syrian refugees, it would be impossible for the country to handle a new refugee flow on such a large scale. This is not only a concern for Turkey but would also have implications for Europe. It has been estimated that around a half million people may flee to Turkey, from where they might attempt to cross into Europe.