Turkey rejects ultimatums, will not back down on Russian S-400s: FM Çavuşoğlu 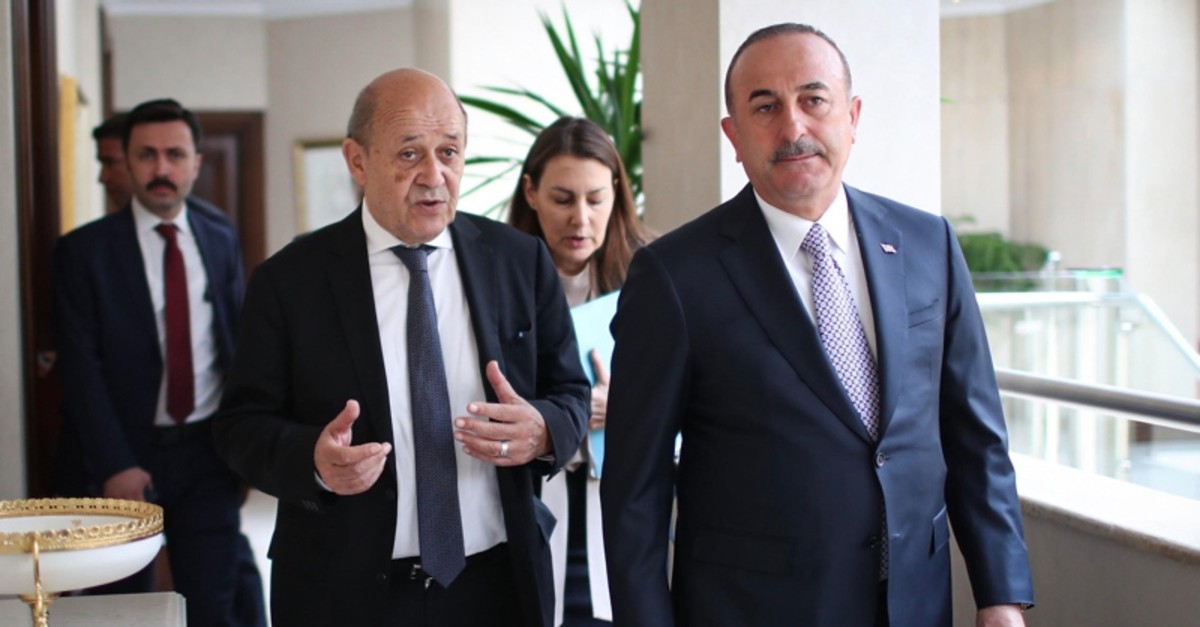 Turkey will not back down from its decision to buy Russian S-400 missile defense systems and it rejects any ultimatums on the issue, Foreign Minister Mevlüt Çavuşoğlu said on Thursday in response to U.S. warnings about the purchase.

Çavuşoğlu was responding to a question in a joint press conference with his French counterpart Jean-Yves Le Drian about a letter in which U.S Secretary of Defense Patrick Shanahan warned Turkey that it would be pulled out of the F-35 fighter jet program unless Ankara changed its plans to install the S-400s.

"The language and content of U.S. Defense Secretary Shanahan's letter are unacceptable, it will not make Turkey back down from its decisions," Çavuşoğlu said.

"If there are concerns about S-400's we should establish a working group with the participation of NATO," the minister said, adding that the proposal was approved by U.S. President Donald Trump but rejected by other U.S. institutions.

"If you trust yourselves, why don't you accept our joint working group proposal? Turkey will not back down from its decisions with these kinds of letters. Turkey bought the S-400s; they are going to be delivered and installed in Turkey," Çavuşoğlu noted.

The foreign minister's remarks came after President Recep Tayyip Erdoğan reiterated Wednesday that Turkey has completed the deal with Russia and that the systems will be delivered in July. He said Ankara would challenge its removal from the F-35 program on every platform.

In a phone call on Thursday, Defense Minister Hulusi Akar, the recipient of Shanahan's letter, told his U.S. counterpart that the letter's language and approach do not suit the spirit of the alliance, according to a statement by the Defense Ministry.

In their phone call, the two ministers exchanged views and demands on bilateral security and defense cooperation issues between the two countries, primarily the F-35, the statement read.

"In the said meeting, the two ministers agreed to meet at the NATO Defense Ministers Meeting in Brussels to continue dialogue," it added. The meeting will be held on June 26-27.

Washington's actions are the latest in a series of moves by the U.S. to try to remove Turkey from the F-35 program amid a standoff with its NATO ally over the purchase of Russian S-400 system.

Following protracted efforts to purchase an air defense system from the U.S. with no success, Ankara decided in 2017 to purchase Russia's system. Ankara said it was Washington's initial refusal to sell its Patriot missile system that led it to seek other offers, adding that Russia offered a better deal that included technology transfers.

U.S. officials argued it would be incompatible with NATO systems and expose the F-35 to possible Russian subterfuge, but Turkey has emphasized that the S-400s would not be integrated into NATO operability and would not pose a threat to the alliance.

It has also repeatedly said it was ready to discuss Washington's concerns. It proposed forming a joint working group with Washington to assess whether the S-400s would pose a threat to NATO; however, the U.S. has not taken any steps to form the technical team.

Separately, the Russian ambassador to Turkey said late Wednesday that Russia's stance on Turkey's purchase of its S-400 missile defense systems has not changed.

"There is no change and will be no change in the stance and position of the Russian Federation related to the S-400 [missile system]," Aleksei Yerkhov told reporters on the sidelines of a reception in the capital of Ankara to mark Russia Day.

Pointing to Russia's commitments to Turkey, Yerkhov stressed that it would fulfill its responsibilities.

Kremlin aide Yury Ushakov said Tuesday that the agreements reached between Russia and Turkey are being fulfilled on time in the given context. When asked if the surface-to-air missiles will be delivered in July, he said, "Yes, that's what we plan."