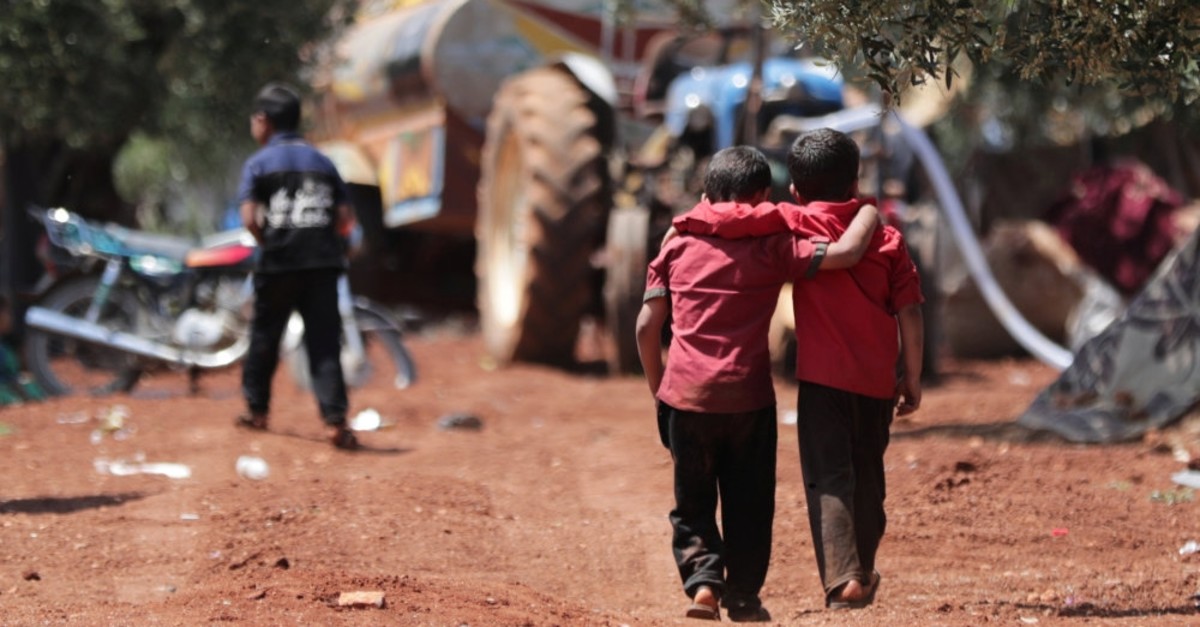 With the humanitarian tragedy caused by the Syrian regime attacks worsening, Ankara expects Russia to fulfill its responsibility to ensure peace and stability in Idlib's de-escalation zone.

President Recep Tayyip Erdoğan said Friday that Turkey will not remain silent if the Syrian regime continues to attack observation points in Idlib. Underlining the importance of Turkey's approach in the region in terms of reaching peace, Erdoğan said that the country will do whatever it takes to stop civilian casualties in Idlib.

Before Erdoğan's remarks, Foreign Minister Mevlüt Çavuşoğlu said on Friday that they were "working with Russia on the cease-fire." In an interview with Anadolu Agency in the capital Ankara, Cavuşoğlu said, "Russia needs to fulfill its responsibility here."

Likewise, Eurasia analyst and journalist Eşref Yalınkılıçlı said Turkey expects Russia to take responsibility to provide stability and peace in Idlib's de-escalation zone in the wake of the Assad regime's indiscriminate attacks on civilians and residential areas. Speaking to Daily Sabah, Yalınkılıçlı said the Russian side, on the other hand, claims Turkey could not prevent Hayat Tahrir al-Sham (HTS) militants from increasing their presence and efficiency in the region and this gave the regime a pretext to intervene. He added that the ongoing situation in Idlib creates tension between the two countries.

Using the term "controlled tension," Yalınkılıçlı said the two countries had different expectations in the issue of Idlib and this creates a conflict on interests. However, the two countries have always maintained diplomatic channels open to overcome problems in cooperation.

Salih Yılmaz, the chairman of the Russian Research Institute at Yıldırım Beyazıt University, told Daily Sabah that Turkey fulfilled its obligations coming from Astana and Sochi agreements; however, the regime has violated the agreements.

The Sochi agreement was reached last September between Ankara and Moscow, envisaging the preservation of the cease-fire in Idlib, with the withdrawal of heavy arms and radicals from the region.

Following eight months of calm provided by the Sochi deal, the regime has started to intensify its attacks since April 26 under the pretext of fighting HTS militants holed up in Idlib. The intermittent attacks and bombardments have killed, wounded and displaced many civilians.

Residential areas have been destroyed by indiscriminate attacks, while numerous educational and health facilities, as well as residential buildings, have either collapsed or become unusable after being targeted by bombs.

The U.K.-based Syrian Observatory for Human Rights (SOHR) said Monday that 25 civilians, including seven children, have been killed in recent strikes, with more than 360 civilians killed since the end of April.

Being the last opposition enclave, Idlib's prewar population of 1.5 million has swelled to around 3 million with new refugee waves after it was designated a de-escalation zone under the Astana agreement between Turkey, Russia and Iran in May 2017 to pave the way for a permanent political solution in Syria.

Tens of thousands of Syrians trapped in other parts of the country were evacuated there under various cease-fire agreements. However, the latest attacks have prompted fears of a new refugee wave as international organizations have been warning against a new humanitarian crisis.

Yılmaz added that Russia does not oppose Turkey's control over the region.

"It has major concerns over militant and terrorist groups in the region, but prefer limited operations in coordination with Turkey," he said.

"Turkey faces a humanitarian crisis near its borders, but this is not the case for Russia," said Yalınkılıçlı, adding that the presence of HTS militants in the region is the leading concern for Moscow. "Russia wants the activity of Hayat Tahrir al-Sham militants in the region to be completely eliminated and the process for a new constitution to be launched."

Commenting on Russia's influence on the Syrian regime, Yılmaz said Russia does not have full control over the Syrian regime, adding that the regime attack following the announcement of a cease-fire was not within the knowledge of Russia and Moscow was disturbed as well.

On violations of the cease-fire in Idlib, Foreign Minister Çavuşoğlu said any excuse from Russia is "unacceptable," as it is supposed to be a guarantor of the peace.

Russian news agencies, citing the Russian military, reported Wednesday that Ankara and Moscow have brokered a complete cease-fire in Idlib between the Syrian regime and opposition forces, which has been applied to the Idlib de-escalation zone and led to a significant reduction in violence. Yet, the Assad regime's attack came hours after the announcement.

Earlier, some media outlets reported that Russian airstrikes targeted "terrorists," which attacked Turkey's observation point, on the request of Ankara.

The statement by the Turkish Defense Ministry said such reports "does not reflect the truth."

"Our immediate task now is to ensure the complete elimination of hotbeds of terrorism, primarily in Idlib, and at the same time to increase the volume of humanitarian aid and assistance to the economic reconstruction of Syria provided by the international community," Putin said on Friday at a meeting of the Shanghai Cooperation Organization (SCO) in Bishkek, Kyrgyzstan.