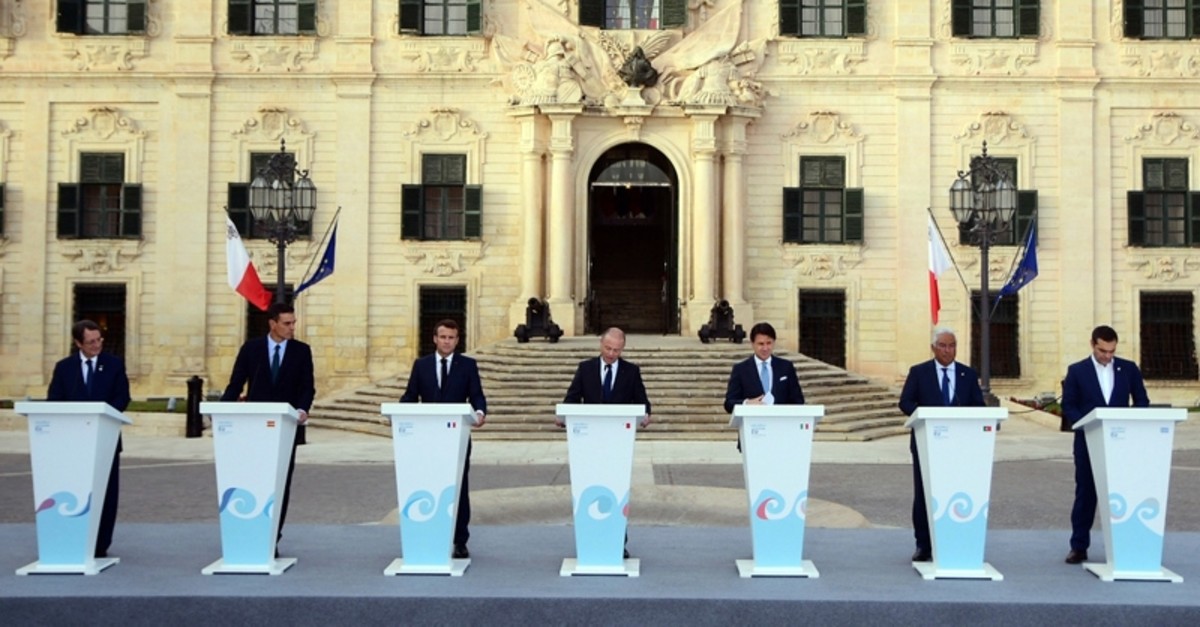 The Ministry of Foreign Affairs on Saturday condemned a joint statement targeting Turkey at a summit of southern European Union states, saying Ankara rejects biased remarks disconnected from reality and against international law.

The European Union should "consider appropriate action" against Turkey if it doesn't stop an "illegal" hydrocarbon drilling bid in waters where the Republic of Cyprus has exclusive economic rights, the leaders of France, Italy, Greece, Portugal, Spain and Malta said in a joint declaration issued at the end of the sixth Med7 summit in the Maltese capital La Valletta on Friday.

"Turkey must stop its illegal activities in the exclusive economic zone of Cyprus," said French President Emmanuel Macron. "The European Union will not show any weakness on this subject."

Greek Prime Minister Alexis Tsipras said: "It's important to signal that the EU should take specific measures if Turkey does not stop its infringing behavior. Whoever doesn't respect international law must suffer the consequences."

"These expressions reflect the Greek Cypriot/Greek duo's national positions that are not compatible with the U.N.'s principles regarding a solution to the Cyprus question and international law. They do not hold any value, provision or influence for us," the ministry statement said, describing the Med7 statement as a new and saddening example of how Greek Cyprus and Greece abuse their EU membership and how some EU countries serve as an instrument to this.

"This situation clearly puts forward once again that the EU and EU countries cannot be impartial and trusted actors in solving of the Cyprus question as well," it added.

Greek Cyprus was admitted to the European Union in 2004, violating the EU's own rules of not allowing candidate countries with border disputes and assurances to Turkey and Turkish Cypriots that the Cypriot accession would not take place until a permanent solution had been reached on the island. The Greek Cypriot accession took place a week after a peace plan backed by U.N. Secretary General Kofi Annan was voted down in the South while being approved in the North.

The statement also underlined that supporting the maximalist maritime boundary claims of the Greek Cypriot Administration is in violation of the international law itself since "as we have emphasized before, neither the EU nor a member country of the EU can pass judgements regarding a country's claim of maritime authority boundary and cannot bring validity to these boundaries. Moreover, the Greek Cypriot Administration, usurping the rights of Cypriot Turks which are a founding element of the island with equal rights, is not a normal country."

The statement reminded the international community once again that Turkey is determined to protect both its rights on its own continental shelf and equal rights of Cypriot Turks on the hydrocarbon resources of the island in the Eastern Mediterranean, and is taking and will not hesitate to take necessary steps in that regard.

Following the release of the Med7 statement, Greek Cypriot President Nicos Anastasiades expressed his "deepest gratitude" for the leaders' expression of solidarity with his country against Turkey's "provocations."

Saying that unilateral exploration deprives the Turkish Cypriot minority of benefiting from the island's natural resources, Turkey has ramped up efforts in the Eastern Mediterranean. Turkey's first seismic vessel, the Barbaros Hayrettin Paşa, bought from Norway in 2013, has been carrying out exploration in the Mediterranean since April 2017.

Ankara also sent its first drilling vessel, Fatih, to the region. The vessel is currently located some 40 miles west of Paphos in an area within Turkey's continental shelf which is also claimed by Greek Cyprus within its exclusive economic zone (EEZ). However, it is not among the areas unilaterally licensed by Nicosia for hydrocarbons.

There are British and Turkish nationals working on the Fatih drillship, in addition to TPAO's cooperation with two American and one Croatian companies with expertise in drilling.

The Greek Cypriot Administration has issued international arrest warrants for the ship's crew and officials from foreign companies assisting in the drilling. A Greek Cypriot government official, who spoke on condition of anonymity because he was not authorized to discuss the matter publicly, told the Associated Press the arrest warrants number in the "double digits" and target officials "in decision-making positions."

Turkey warned this week that it would give the "necessary response" to Greek Cyprus over the arrest warrants.

But he claimed on private TV station Sigma on Thursday that some drilling support companies had stopped collaboration with Turkey following actions that he said have been taken by the Greek Cypriot government and "by companies which are lawfully authorized to operate within Cyprus' exclusive economic zone."

ExxonMobil, France's Total and Italy's Eni are among the companies unilaterally licensed by the Greek Cypriot government to search for gas inside their claimed exclusive economic zone.

The gathering in Malta came a week ahead of a full summit of EU leaders, which falls at a time when a number of top jobs in Europe are up for grabs – including new heads of both the European Commission and the European Central Bank (ECB).