CICA urges solution to decadeslong Palestine crisis, questions its possible role in it 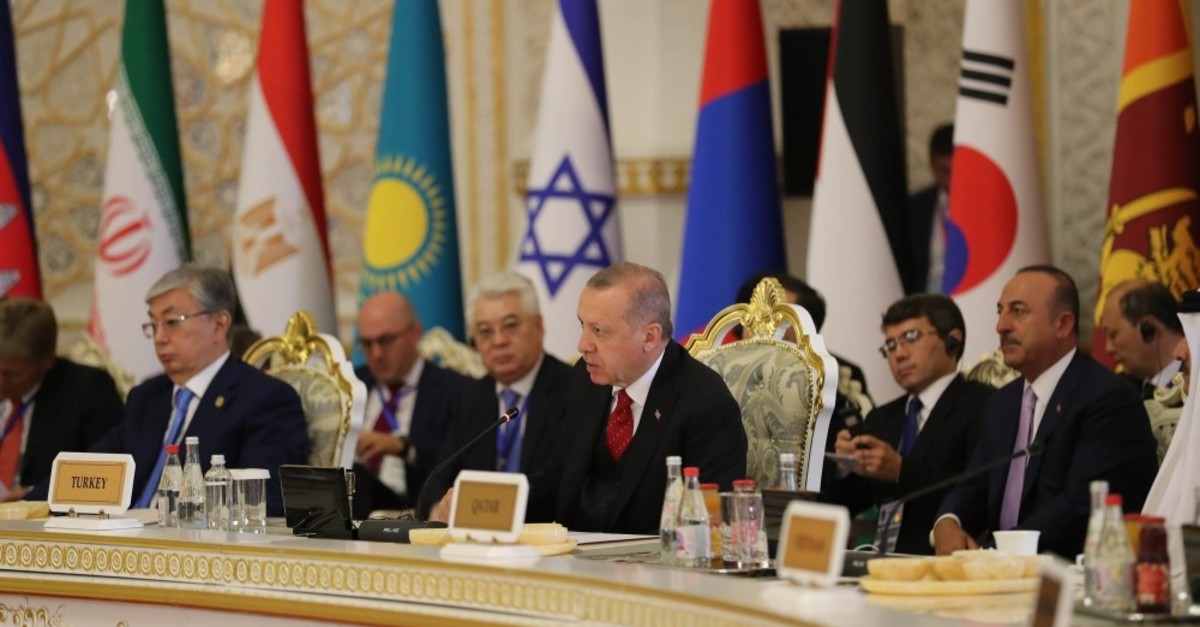 President Recep Tayyip Erdoğan called the Conference on Interaction and Confidence-Building Measures in Asia (CICA) countries' attention to the Palestine problem, which hasn't been solved for years, and on the numerous initiatives by the U.N. regarding the matter that have failed over and over again

The Conference on Interaction and Confidence-Building Measures in Asia's (CICA) 5th Summit of Heads of State and Government was held on Saturday, June 15, with Tajikistan as the host country.

Bringing together prominent regional leaders, including President Recep Tayyip Erdoğan, Russian President Vladimir Putin, Chinese Premier Xi Jinping and Iranian President Hassan Rouhani, the summit addressed various significant issues, from sustainable security to friendly international relations in the region, from the mitigation of conflicts to protection of member states' mutual interests and the joint struggle against terrorism. The Palestine issue, however, has left its mark on the final declaration of the summit, as the U.N.'s long legacy of failure in coming up with a concrete solution to the topic urged the CICA to question its own possible role in the matter.

The leaders of the 27 participant countries met at the invitation of the President of Tajikistan, Emomali Rahmon, in the capital Dushanbe. Aside from all the topics that were discussed in the summit, the 27 leaders confirmed their commitment to the U.N. Charter and international law's universally accepted norms and principles. Still, regardless of commitment to its principles, criticism has emerged of the necessity for the U.N. as well, mainly due to its ongoing fruitless position on the Palestine issue, despite decades of searching for a permanent solution.

"It is required by human dignity to remove the occupation, oppression and injustice from Palestine's fate, so to speak. We reject efforts to create new faits accomplis in Jerusalem," President Recep Tayyip Erdoğan said, pointing at the importance of the issue in light of the recent developments in the region that escalated the level of the crisis even more.

"We invite all countries to respect the United Nations' resolutions and the historical and legal status of Jerusalem," he underlined, adding that Turkey has an active stance on the Palestine issue.

Back in 2017, U.S. President Donald Trump announced that he is moving the U.S. Embassy in Tel Aviv to Jerusalem. The status of Jerusalem is one of the thorniest disputes between Israel and Palestine, and Palestinian leaders accused Trump of sowing instability by overturning decades of U.S. policy. Israel captured East Jerusalem in the 1967 Mideast war and annexed it in a move that is not internationally recognized.

Most foreign nations have avoided locating embassies there for fear of prejudging peace talks on the city's final status. Yet, Israel has been trying to convince nations to transfer their missions from Tel Aviv to Jerusalem. Still, so far, only the U.S. and Guatemala have moved their embassies, although some states like Moldova also announced that they are seriously thinking about having such a move.

The Palestine issue was also raised in CICA's final declaration, the joint decision of the 27 member states, which said, "We see it as necessary to resume negotiations on the Middle East peace process in order to achieve a two-state solution based on international law, the relevant U.N. resolutions and the Arab Peace Initiative, for two sovereign states to live side by side in peace, harmony, comfort and security."

The statement also underlined that they remain committed to "the Palestinians' right to an independent and fully sovereign Palestinian state within the borders as of June 4, 1967, with its capital as east Jerusalem, and strongly support the historical Hashemite custodianship of holy city of Jerusalem and its holy sites."

"We are absolutely against unilateral decisions that could change the current status of the holy city of Jerusalem. We are very concerned about the current financial situation of the United Nations Agency for the Assistance of the Near East Palestine Refugees (UNRWA) and emphasize its important role in providing basic and emergency services to Palestinian refugees," it further expressed.

Can CICA bring peace to Palestine?

This emphasis that is given to the issue within the joint declaration, however, raised the question as to whether this 27-member organization can bring a different vision to the issue of Palestine, for which the U.N. has been unable to find a solution and which has seen hostility increase against Palestinians over the years.

In this context, Erdoğan was asked by the media aboard the presidential plane on his return from Tajikistan about CICA's openness in its international initiative for Palestine. He said CICA may work as a pressure group on this issue, but the real responsibility is on the Organisation of Islamic Cooperation (OIC). He said the "deal of the century" spoken of should be taken seriously, that the issue must be protected as a historical responsibility for future generations and that great responsibility falls to Saudi Arabia and other Arab countries in this regard.

During its term presidency of the OIC in 2017, Turkey organized a summit on Jerusalem against Trump's decision. Invited by Erdoğan, leaders and representatives of 57 Muslim countries gathered in Istanbul. While the heads of state from Iran and many other countries took part, Saudi Arabia showed little interest and sent only quite low-level representatives.

Erdoğan not only urged the participants of the summit to take action regarding the Palestine issue, but also held several bilateral meetings with the heads of state of Tajikistan, Russia, China, Kazakhstan, Iran, Uzbekistan, Cambodia and Afghanistan. In a statement to reporters aboard his plane he addressed his meeting with Putin and said they spoke of a target of $100 billion in trade between Turkey and Russia the opening of the Turkish Stream by the end of the year, work on the nuclear power plant and the S-400 missile defense system Turkey bought from Russia.

After the purchase, U.S. officials advised Turkey to buy the U.S. Patriot missile system rather than the S-400s, arguing the Russian system would be incompatible with NATO systems and expose the F-35 to possible Russian subterfuge. But Turkey has emphasized that the S-400s would not be integrated into NATO operability and would not pose a threat to the alliance.

Erdoğan also said in his meeting with President Xi that they aim to ream to reach $50 billion worth of trade with China and that they spoke of the Kars-Edirne railway within the context of the "Belt and Road Project."

In a speech at the summit, Erdoğan said Turkey lends great importance to CICA and that the platform representative power has become an eminent regional forum. He said, "The efforts Turkey exerts take shape for dynamism, peace, prosperity and stability in our region. We are doing our best to end the civil war in our neighbor Syria. With the struggle against the PYD [Democratic Union Party] and Daesh, Turkey is hosting around 4 million Syrians, which has occupied more than 4,000 square kilometers of land, and returned 330,000 Syrians to their own land."

The civil war in neighboring Syria has saddled Turkey with the task of addressing challenges stemming from the ongoing crisis. Pursuing an open-door policy, Turkey has received a constant flow of displaced Syrians fleeing the conflict, by far the most among refugee-hosting countries.

He spoke under the headings of the foundation of peace in Afghanistan, resolution through dialogue between Pakistan and India, stating also that the ongoing drama the Rohingya are experiencing should stop at once and that a common attitude should be developed against rising extremism and terrorism.

The CICA summit began with an initiative from then Kazakh President Nursultan Nazarbayev in 1993 and was held for the fifth time this year, this time in Tajikistan. Sri Lanka's participation brought the number of attending states this year up to 27. Turkey is one of the founding states and held the rotating presidency of CICA from 2010 to 2014.