Erdoğan says will continue active diplomacy, focus on crucial matters for Turkey ahead of G-20 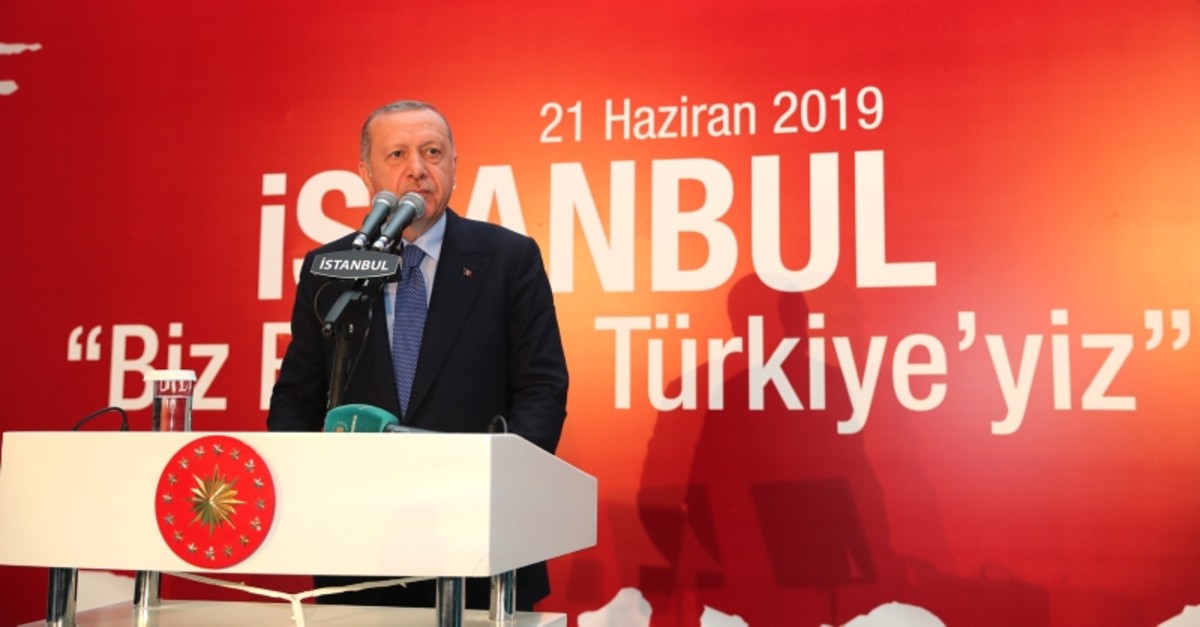 President Recep Tayyip Erdoğan said Sunday evening that the government will continue to be active in diplomacy and focus on important matters for Turkey, now that local elections have concluded.

"We will continue to meticulously focus on all important matters, domestic and international, for Turkey, especially the G-20 summit at the end of this month, the upcoming China visit and later the Southern Europe and the Balkans Summit," he said.

Erdoğan has a busy agenda due to diplomatic meetings on the economy and Turkey's purchase of the Russian made surface-to-air missile (SAM) system in the aftermath of the Istanbul mayoral elections. The president will attend the G-20 Leaders' Summit on June 28-29 in Osaka, Japan, where he will meet U.S. President Donald Trump to discuss the S-400 and bilateral investment opportunities. Erdoğan is expected to reiterate once more Turkey's commitment to the S-400 deal. Turkey's purchase of the Russian-made missile system has complicated relations with the U.S. since late 2017 as American officials oppose the deal on the ground that the S-400 will jeopardize the security of F-35 stealth fighter jets, of which Turkey is one of the manufacturers.

Despite Turkey's iterative offers to set up a working committee under the supervision of the North Atlantic Treaty Organization (NATO), U.S. officials have not given a response to resolve the issue at a technical level.

During the G-20 Summit, the president will also meet Russian counterpart Vladimir Putin to discuss economic ties and the S-400 deal; the S-400s are scheduled to be delivered in July.

Following the G-20 Osaka Summit, President Erdoğan will pay an official visit to China on July 2 to meet Chinese President Xi Jinping. The main focus of the meetings in China will be commercial relations. Turkey aims to have more balanced trade ties with China given the $20 billion trade deficit with the Asian country.

In the aftermath of the Japan and China visits, the president is expected to visit India to meet Indian President Ram Nath Kovind and Prime Minister Narendra Modi. In addition to bilateral economic ties, Erdoğan is also expected to discuss India's decision to buy the S-400 missile system. New strains have emerged between the U.S. and India because of an Indian plan to buy the S-400 SAM from Russia, which can trigger U.S. sanctions under its Countering American Adversaries Through Sanctions Act (CAATSA), prohibiting any engagement with Russia's defense sector.

Apart from overseas visits, President Erdoğan will also host foreign heads of states in Ankara before he pays an official visit to Iraq in the autumn or toward the end of the year. A delegation of high-level Iraqi officials will come to Turkey in the upcoming period to discuss a wide range of issues. The two sides will discuss the rearrangement of regional ties after the election of Nechirvan Barzani as the head of Kurdistan Regional Government (KRG) in northern Iraq. Oil trade and water issues will also be on the agenda. Turkish and Iraqi officials have been in contact recently over the restoration of the Kirkuk-Ceyhan oil pipeline, which was damaged by the terror group Daesh. The two sides also aim to reach $20 billion in bilateral trade as the trade ministers agreed last week during Turkey-Iraq Business Forum in Baghdad. Increasing investments and opening Turkey's consulates in Mosul and Basra are other topic on the agenda of the Turkish-Iraqi meetings.