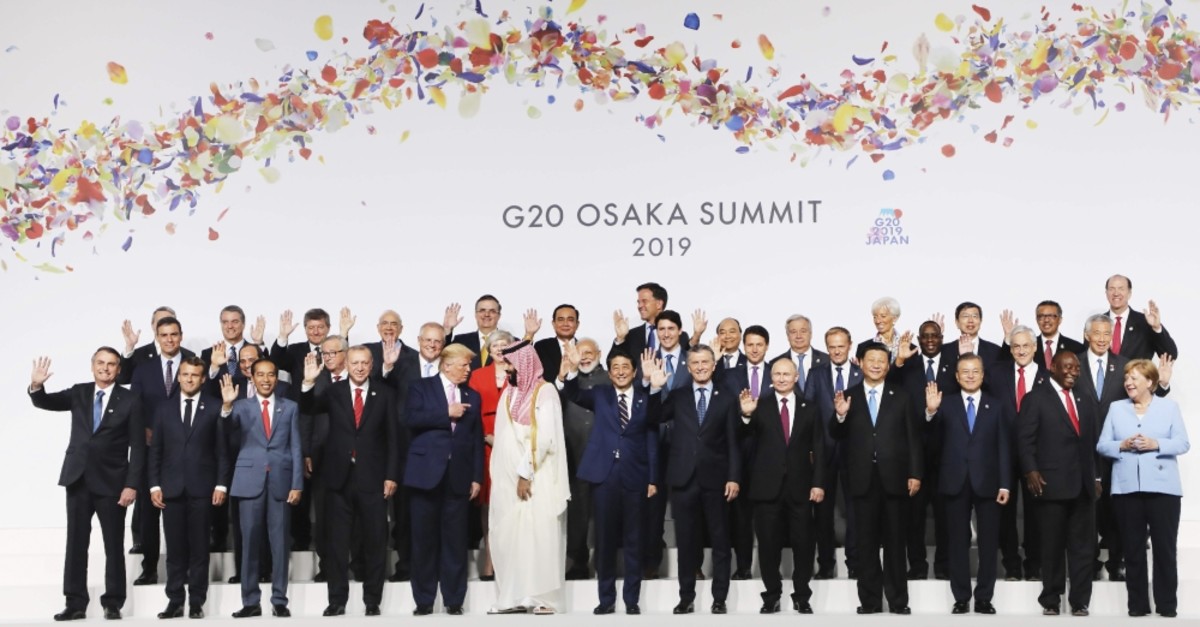 The leaders of the world's 20 largest economies of the world have once again convened with the hope of settling urgent global matters, yet the results have not been so promising since they have been preoccupied with their own agenda

The leaders of the world's top 20 economies posed for a family photo in Osaka on Friday, all smiling with civil postures and seeming to have settled major differences and conflicts for a few seconds. Yet, they were supposed to be swamped with global issues of critical importance, including the U.S.-China trade war, the Iran conflict, refugees, climate change, data security and sustainable development in addition to a wide variety of bilateral topics between governments. As the host country, Japan hopes to use the summit to push back against trade protectionism around the world but it remains unclear if Tokyo can counter the trend.

Japanese Prime Minister Shinzo Abe stressed the need to focus on what unites G20 members and not divides, only too aware of the many differences likely to emerge over 24 hours. "We want the G20 to focus on where we can agree and cooperate rather than highlighting differences," Abe said. The G20, which kicked off Friday in the Japanese town of Osaka, is an annual meeting of leaders from the countries with the largest and fastest-growing economies. Its members account for 85 percent of the world's gross domestic product, and two-thirds of its population. One reason why the countries are having difficulty finding common ground for the resolution of the urgent global issues that yield far-reaching consequences is the fact that they are focused on their own bilateral problems. For the last week, the G20 headlines were, to a great extent, dominated by the U.S.-China trade war, U.S.-Turkey relations strained due to the S-400 missile system, U.S.-Russia issues, Turkey's dialogue with Russia in Syria and the U.S.-Iran conflict, which needs to be addressed by all participating countries.

Turkey, as one of the significant figures of the G20 meetings, has a lot to discuss with other partner countries, including the U.S., the U.K, Russia, India and Germany in addition to the representatives from global institutions. 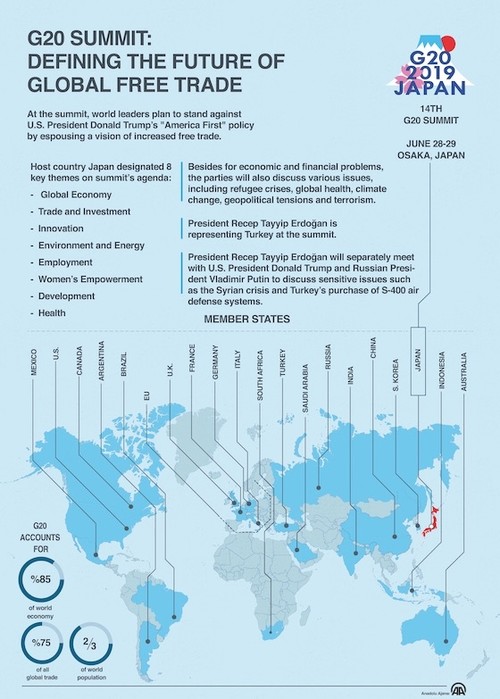 President Recep Tayyip Erdoğan on Friday met and chatted with fellow world leaders as the G20 summit kicked off in Japan's Osaka. He met with his U.S., Russian and French counterparts Donald Trump, Vladimir Putin and Emmanuel Macron. Presidency Communications Director Fahrettin Altun shared Erdoğan's photos with his fellow leaders on Twitter. Erdoğan is scheduled to meet with Trump and Putin on the second day of the G20 to discuss bilateral ties as well as various topics, including the Russian S-400 missile systems and recent developments in Syria. Erdoğan's agenda on Saturday also includes bilateral meetings with Indian Prime Minister Narendra Modi and British Prime Minister Theresa May.

S-400 issue is main topic of meeting with Trump

The agenda of the Turkish and American leaders during the G20 summit in Japan is expected to be overwhelmed by the S-400 issue. The meeting comes as tensions between the U.S. and Turkey have escalated in recent months over the Russian S-400 air defense systems purchase, which Washington said will jeopardize Turkey's role in the F-35 fighter jet program and could trigger sanctions. Following protracted efforts to purchase an air defense system from the U.S. with no success, Ankara decided in 2017 to purchase the Russian S-400s. U.S. officials urged Turkey to buy the U.S. Patriot missiles, arguing the Russian system would be incompatible with NATO systems and expose the F-35s to possible Russian subterfuge. Turkey, however, emphasized the S-400 would not be integrated into NATO systems and would not pose a threat to the alliance. Ankara recently urged the formation of a commission to clarify any technical issues, but the U.S. has failed to respond to this proposal. Turkish officials have on every occasion argued it won't back down on the deal and that it was already a done deal and that buying the Russian defense system is a matter of sovereign decision-making.

Developments in Syria to be discussed with Putin

Erdoğan is also expected to discuss ongoing developments in Syria with Trump and Putin. Given continuing cease-fire violations in northwestern Syrian town Idlib, close to the Turkish border, by the Assad regime, Erdoğan is also likely to urge Putin to do more to rein in his Syrian allies. Also, a Turkish soldier was killed and three were wounded when a Turkish observation post in Syria's Idlib region came under attack Thursday. The Turkish military retaliated to the shelling and mortar fire, carried out by the Bashar Assad regime.

It was the sixth such attack near the observation post, with similar attacks by the regime also reported on April 29, May 4, 12, 31, and June 8.

Idlib, the last opposition enclave in Syria, had a pre-war population of 1.5 million. The number swelled to around 3 million with new refugee waves after it was designated a "de-escalation zone" under the Astana agreement between Turkey, Russia and Iran in May 2017 that paved the way for a permanent political solution in Syria. The Turkish military set up 12 observation posts in Idlib's de-escalation zone after the ninth round of the Astana-hosted peace talks.

In the family photo of the leaders, a small detail grabbed the attention of keen eyes. Trump was standing in between Erdoğan and Saudi Crown Prince Mohammed bin Salman, also known as MBS. The G20 summit and the photo was the reappearance of the Saudi crown prince in the world stage, just days after the U.N. publishes a report on the killing of Washington Post columnist Jamal Khashoggi at the Istanbul Consulate of the kingdom last October.

MBS' central position in the photograph, alongside the hosting Japanese prime minister, may have signaled the return of the prodigal son. On Trump's right stood Erdoğan, who vehemently criticized the brutal murder of Khashoggi by a hit squad at a diplomatic mission in his country. Erdoğan has repeatedly said that the killing was ordered at the highest level of the Saudi government and attacked Washington for its "silence" over Khashoggi's death.

After the murder of the Saudi journalist, Turkey has made immense efforts to tell the world of the high-level involvement in the killing and has garnered support from the U.S. Congress. Yet the U.S. administration and the other world powers have failed to pursue the issue further and internationally prosecute the parties responsible.

Ongoing developments in global trade, particularly the intensifying trade war between the U.S. and China and protectionist measures are expected to dominate the summit.

All eyes will be on whether the two can bury the hatchet in their long-running trade war that is causing headwinds for an already fragile global economy. Trump and Chinese President Xi Jinping are scheduled to have extended talks on Saturday at the Osaka summit in their first face-to-face meeting since December at the last G20 in Argentina. Many experts expect the two to agree on a kind of truce and a cease-fire that prevents further escalation between the two and a new deadline for a final agreement.

So far, the two have slapped tariffs on hundreds of billions of dollars of each other's imports in a nearly yearlong trade war. The U.S. has already upped tariffs on some $250 billion worth of Chinese goods, to 25 percent, and Trump is threatening more duties on another $325 billion if there is no deal. He, however, has indicated that he could wait on imposing the taxes, giving more time for talks.

Meanwhile, experts believe there is little chance of a full deal immediately, saying the best hope is for a truce that would avoid Washington imposing new tariffs and ramping up the conflict. But even a truce is not guaranteed, with The Wall Street Journal reporting Thursday that Beijing will not agree to any deal unless Washington lifts its ban on Chinese telecoms firm Huawei. In an apparent reference to this issue, Trump at the opening session on Friday said: "We must also ensure the resilience and security of our 5G networks."

Even before the summit kicked off yesterday in Osaka, opposing voices asked whether the G20 countries will be able to sign the communique. For instance, French President Emmanuel Macron said Wednesday France would refuse to sign any agreement that bowed to any demand that could jeopardize the Paris Agreement on climate change in response to allegations that Japan will be seeking consensus language that could wind down previous communique rhetoric on climate change. The French president continued to make climate an issue of bargain Thursday as he said he would not sign any trade deal with Brazil if President Jair Bolsonaro pulled out of the Paris climate accord, threatening to put a spanner in the works of EU-Mercosur trade negotiations. EU talks with the Mercosur group of Argentina, Brazil, Paraguay and Uruguay, the world's fourth-largest trade bloc, have intensified, with Bolsonaro saying this month a deal could be signed "soon," while the EU called it the "number one priority." The G20 leaders were also struggling to find common ground on issues such as information security, climate change and migration, said Svetlana Lukash, Russia's representative to the group. "Currently, work on the final [G20] documents is ongoing and this is not going easy," Lukash told reporters.

The wider EU is threatening to block the G20 statement if it falls behind previous pledges on climate change, according to European Commission President Jean-Claude Juncker.

"I do think that we need a strong statement on climate change," Juncker told reporters shortly ahead of the summit, adding that he "couldn't accept a watering down" of the climate goals espoused at last year's G20 summit in Buenos Aires. Moreover, President of the European Council Donald Tusk on Friday was reported to be disagreeing with Macron's stance as he threated to withdraw from the G20 letter if it does not cover the issue of climate change.

Asked how he could comment on Macron's claims, Tusk told reporters that G20 leaders should help Japanese Prime Minister Shinzo Abe, whose country holds the presidency of the summit, with a final declaration instead of threatening to boycott it.