Astana trio to come together to expedite political solution in Syria 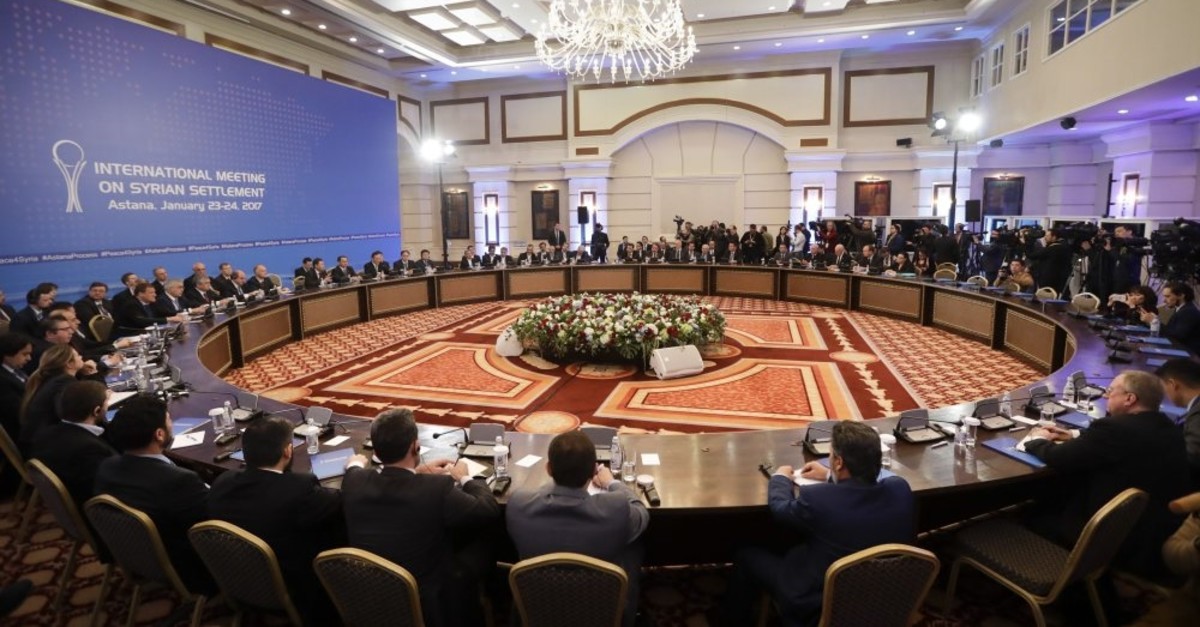 Turkey, Russia and Iran are cooperating as part of the Astana process to bring peace and stability to war-torn Syria.
by Daily Sabah Jul 06, 2019 12:23 am

Turkey, Iran and Russia will meet in Turkey next month to find a permanent solution in Syria, their agenda will focus on the constitutional process, political transition and security

The 13th Astana meeting, initiated by Turkey, Iran and Russia to bring warring sides together and find a permanent solution for the eight-year-long Syrian civil war, will be held next month in Istanbul with the main agenda items concerning the constitutional process, political transition and security.

Presidential Spokesman İbrahim Kalın said Thursday that Ankara will host a trilateral summit with the participation of Russia and Iran in August.

"The meeting will mainly concern Idlib and other parts of Syria, the general security situation, transition processes, the constitutional commission and resettlement," he said after a Cabinet meeting in Ankara. Turkey, Russia and Iran are cooperating as part of the Astana process to bring peace and stability to war-torn Syria.

While the first meeting of the Astana process was in Turkey in January 2017 to facilitate U.N.-sponsored peace talks in Geneva, officials from the three countries most recently met in the newly renamed Kazakh capital Nur-Sultan in April for the 12th round.

Previously during the G20 summit, President Recep Tayyip Erdoğan announced that in the sideline meetings, it was decided with the relevant world leaders to hold the next Astana summit in Turkey.

Russia confirmed the preparations for the next round of talks. During his meeting with U.N. special envoy for Syria Geir O. Pedersen on Friday, Russian Foreign Minister Sergey Lavrov said that Ankara, Tehran and Moscow would continue efforts to establish lasting and consistent peace in Syria. While political settlement and formation of a constitutional committee was one of the main topics of the Pedersen-Lavrov meeting, the Russian foreign minister stressed that he hopes Syria's constitutional committee would start working soon with U.N. cooperation.

The planned constitutional committee, including representatives from the opposition, the regime and guarantor countries, will be tasked with writing and establishing Syria's post-war constitution, which is seen as a stepping-stone to elections in the war-torn country. The formation of the committee has been stalled for some time now due to objections from the Bashar Assad regime since participants at a Russia-hosted conference in January agreed to establish it.

The committee will consist of 150 members, a 50-member delegation from the regime and a 50-member delegation from the opposition. The Syrian regime has been objecting to 50 members of the committee representing civil society, experts, independents, tribal leaders and women. During the previous rounds of Astana talks, the three countries agreed on several topics and further implemented them. They decided to strengthen the mechanism established to ensure monitoring of the implementation of the ceasefire in Syria and to create tension zones where the conflict is most intense between the opposition and regime forces.

Also, with a project prepared by a working group formed under the Astana trio and the U.N. to investigate the fate of missing people and release those who have been detained, several detainee swap deals have been carried out.

Kalın also said that there would be another meeting with Russian, German and French leaders in two months, where Syria and regional issues will be discussed in these meetings.

"During the G20 summit it was agreed upon that a four-party summit just like the one from last year will be held in Istanbul hosted by our president. A quadruple summit is planned before going to the U.N. General Assembly," he said.

In October 2018, the leaders of Turkey, Russia, France and Germany came together in a quadruple summit in Istanbul, hoping to lay the groundwork for an eventual peace in a country devastated by years of war. In a final statement, leaders rejected separatist agendas aimed at undermining the sovereignty and territorial integrity of Syria, also highlighting the need to create conditions throughout the country for the safe and voluntary return of refugees and internally displaced persons to their original places of residence in Syria and that the returnees need security from armed conflict, political persecution or arbitrary arrests.