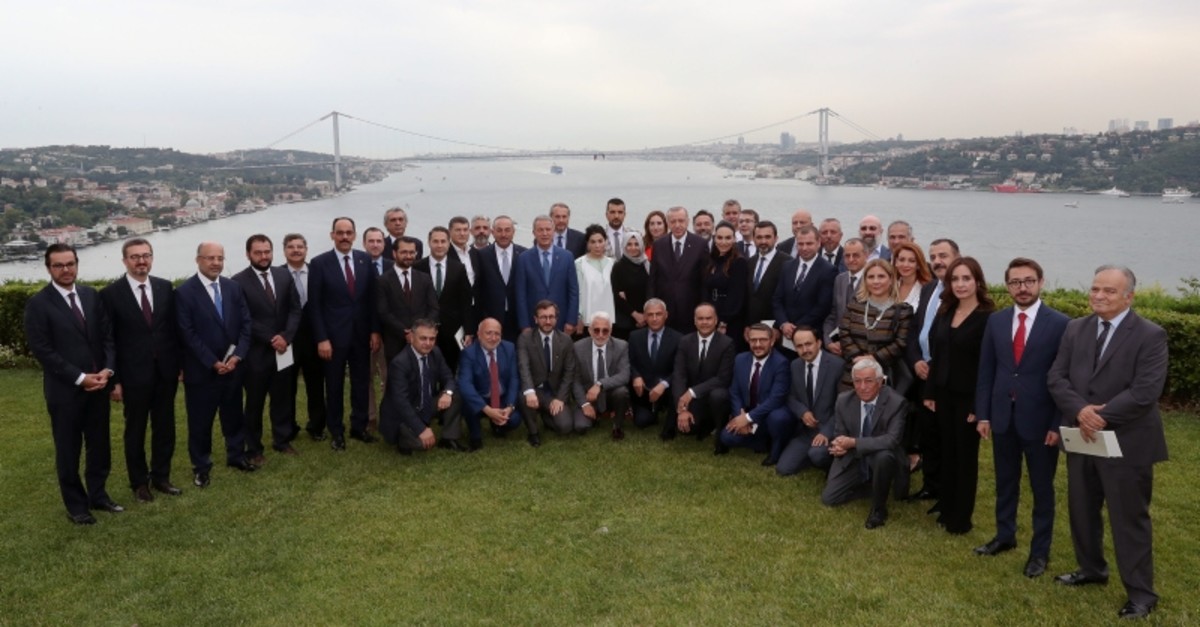 Turkey is not getting ready for possible warfare, instead it is aiming to bolster its national security and sustain regional peace with the purchase of the S-400 missile defense system from Russia, President Recep Tayyip Erdoğan said Sunday, underlining that all of the country's defense industry efforts take place in this respect.

Meeting with the chief editors of prominent newspapers and TV channels in Istanbul, Erdoğan expressed his gratitude to media representatives for their supportive stance on the S-400's purchase after a screening of an introductory film of the missile system.

"All of our efforts [in the defense industry] are a result of our desire to provide [national and regional] peace," Erdoğan underlined.

"The purchase of the S-400 missiles and the disputes that took place over the issue showed us the common sense of our people and the media, which I believe is the voice of the people," Erdoğan said, adding that he wishes a similar societal unity over other critical issues as well, while calling on media representatives to inform their audiences on such matters.

Touching upon the few politicians who have been criticizing the purchase in an unfair manner, Erdoğan said that they are acting like "they are the representatives of the U.S."

"This is not an arbitrary purchase. As I've said before, this is a compulsory purchase," Erdoğan reiterated, underlining the significance of the missiles for the country once again.

He also added that he hopes to complete the purchase by April 2020.

Turkey has urged the formation of a commission to clarify any technical issues, but the U.S. has failed to respond to this proposal. The U.S. has threatened sanctions over the purchase, with Turkey responding that any sanctions would be met in kind. Yet, despite all the threats, Turkey continued its determination over the purchase and the first delivery of the missiles took place last week.

Reminding the media that Turkey first applied to the U.S. to buy defense systems during U.S. President Barrack Obama's term in office, Erdoğan said that despite having numerous talks with the country on the issue, unfortunately Washington refused to sell them the Patriots.

President Erdoğan said that after holding negotiations with other countries like China but failing once again, they turned to Russia and agreed to buy the S-400 missiles.

Instead of lauding Turkey for its efforts, West trying to punish country

Mentioning the recent concerning developments in the Middle East, Erdoğan said that Turkey is being forced to be a part of the conflicts in defiance of its will, adding that the country has never fell into these traps and never will.

"Turkey has always acted consistently in all the developments in Syria, which entered its eighth year, in Egypt, Libya, Qatar and many other African countries, even in the latest Venezuelan incidents," the president expressed.

Underlining that Turkey hosting 4.5 million refugees, most of whom are from Syria, is a success by itself, Erdoğan said that the country should have been nominated for a Nobel Peace Prize for these efforts.

"We've showed these efforts not because we expect anything in return but because of our humanity and culture," he said, adding that there are no other examples like Turkey in this regard.

Yet, the president said that instead of awarding Turkey for its successes, the international community is trying to punish the country for trying to bring peace and stability to the region.

"In order to solve the Syrian crisis, I've come up with an offer that I presented to all the world leaders in the G20 Summit in Antalya. I told them that a safe zone all along our Syrian border should be formed," the president said, adding that in his vision, the area will be cleared off from the terrorists and turned into a place that the Syrian refugees can continue their lives.

"Although everyone welcomed the idea in principle, unfortunately, none of the Western leaders were willing to take a concrete step on the issue."

He added that meanwhile, threats from Syria continued to escalate and caused the killing of civilians in the country with bomb attacks in major provinces.

A 20-mile-deep safe zone between the northern Syrian towns of Jarablus and al-Rai has been mentioned several times since 2012 by Erdoğan, who has maintained that the terror-free safe zone to be established in Syria's north must be based on the country's territorial integrity.

However, the plan did not come to fruition at the time. The details of the safe zone need to be ironed out, yet, one thing is clear: Turkey is firmly against the presence of the People's Protection Units (YPG) in the region.

The president said that Turkey has managed to eliminate the terror corridor that is trying to be established on the Syrian border through operations Euphrates Shield and Olive Branch.

Since 2016, Turkey's Euphrates Shield and Olive Branch operations in northwestern Syria have liberated the region of YPG and Daesh terrorists, making it possible for Syrians to return home. Since being rooted out from Afrin by Operation Olive Branch, the YPG has targeted civilians and security forces with terrorist attacks.

"In order to prevent the regime's massacres in Idlib, like it has already done in various provinces, we've come up with a trilateral structure with Russia and Iran. Through cooperation with Russia on the ground, we've achieved stability in Idlib. Although the regime continues to violate the cease-fire, we continue to have a unity with Russia over providing security in Idlib," he said.

The Sochi agreement was reached on Sept. 17 by President Recep Tayyip Erdoğan and his Russian counterpart Vladimir Putin. According to the agreement, a cease-fire in the Idlib region will be preserved, with the withdrawal of heavy arms and radicals from the region. Prior to the agreement, the Assad regime was signaling a major operation against Idlib, which is the last stronghold of the opposition, sparking deep fears in the international community of a new humanitarian crisis.

Once Operation Claw ends, PKK threat in Qandil will be neutralized

Regarding the counterterrorism operations in northern Iraq, Erdoğan said that he believes that when the operations finally ends, there will no longer be a threat called Qandil.

"They've tried to create an alternative for Qandil in Sinjar. That place has been cleared from the terrorists as well," he said.

The first phase of Operation Claw, which was launched on May 27, aimed to prevent the infiltration of PKK terrorists onto Turkish soil from Hakurk and spoil their settlement plans in the area.

On Saturday, Turkey launched the second phase of Operation Claw as a follow-up, which revealed new information on terrorist activity, according to the ministry. The Hakurk region is among the main locations PKK terrorists use to infiltrate Turkey or attack Turkish border outposts. The area is located 30 to 40 kilometers south of the Derecik district of southeastern Hakkari province, bordering Iraq, and currently serves as the main base for terrorists between their headquarters in the Qandil mountains near the border with Iran and Turkey.

"We are taking concrete steps against the understanding that aims to eliminate the rights, interests and benefits of Turkey and Turkish Cypriots in Eastern Mediterranean," Erdoğan said regarding the recent developments in the region, indicating that Turkey's drilling ships continue their activities.

"In order to provide the security of these ships, our maritime and air forces also present in the region," he added.

Turkey has made continuous efforts to protect its sovereign rights and the rights of Turkish Cypriots in the Eastern Mediterranean region, where it has been drilling in its exclusive economic zone (EEZ), which was registered with the United Nations in 2004. It has consistently contested the Greek Cypriot administration's unilateral drilling in the Eastern Mediterranean, saying Turkish Cypriots also have rights to resources in the area.