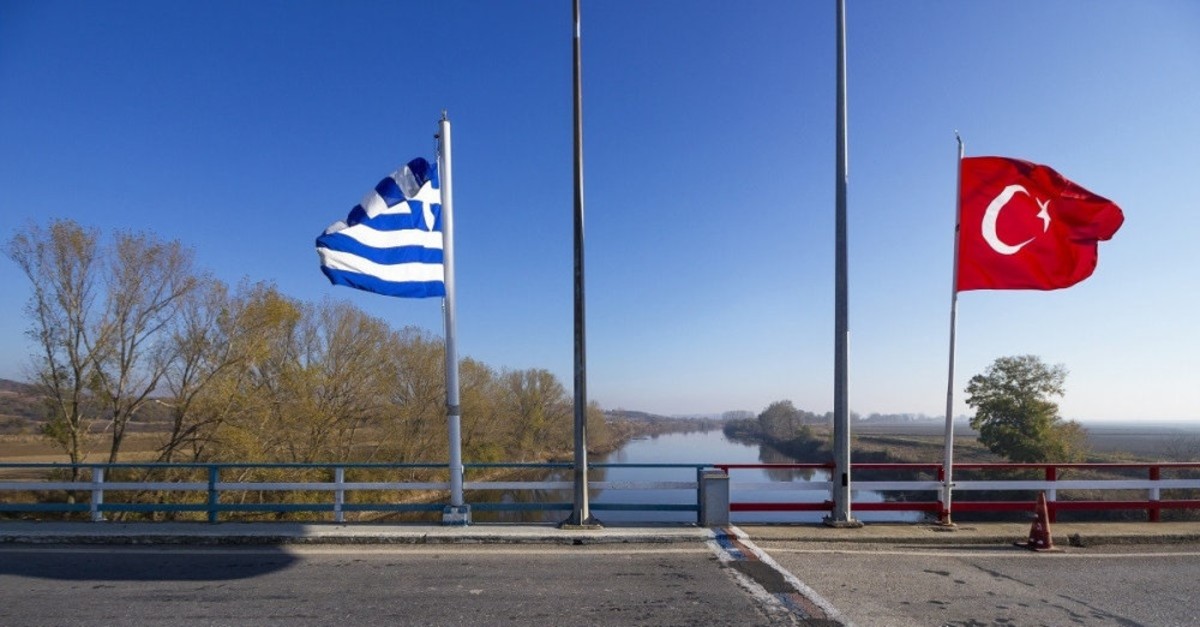 As the two neighbor countries, Turkish-Greek diplomacy loaded with a quite remarkable historical baggage as well as a series of current issues from fight against terrorism to Cyprus crisis.
by Şeyma Nazlı Gürbüz Aug 01, 2019 12:36 am

Despite the positive nature of the recent remarks by the Greek prime minister created hopes for a new era in Turkish-Greek ties, experts say these are nothing but empty words devoid of sincerity

"I call on [Turkish President Recep] Tayyip Erdoğan for a mutual approach in which we will take brave steps," said newly elected Greek Prime Minister Kyriakos Mitsotakis in one of the first speeches that he gave following his inauguration as prime minister last week. These words followed by a series of statements that gave the green light to Turkey on several issues, from the extradition of Gülenist Terror Group (FETÖ) fugitives to the improvement of bilateral ties, creating an atmosphere that signals the beginning of a new page in Turkish-Greek relations.

However, despite this positive rhetoric that encapsulates the diplomatic statements, according to experts, it is hard to take the new prime minister's remarks as sincere comments that reflect real politics, considering recent developments and the history that shapes the two countries' stance against each other.

"It is true that there is a positive atmosphere that might stem from his family's roots. However, it is impossible for me to think that his statements are sincere considering the current state of Greece," said Hüsamettin İnaç.

"I believe that these statements were only mentioned to ease Turkey and gain some time to act on certain issues. These statements do not reflect reality," he added.

In the beginning of the month, Mitsotakis, leader of the center-right New Democracy (ND) Party, was sworn in as prime minister of Greece after having won over 39.85 percent of the vote and 158 out of a possible 300 seats in the July 7 national parliamentary election, in which all seats were contested. Compared to previous Prime Minister Alexis Tsipras, Prime Minister Mitsotakis is seen by the people as more serious, better educated and more conservative, as well as a lover of the ideals of the EU. Mitsotakis is the son of former Prime Minister Konstantinos Mitsotakis, one of the country's longest-serving parliamentarians. His sister, Dora Bakoyannis is a former minister and Athens' first female mayor.

Konstantinos Mitsotakis, who passed away in 2017 and was in power from 1989 to 1992, had good relations with then Turkish prime ministers Süleyman Demirel and Turgut Özal. After the 1967 Greek military Junta coup, he fled to Turkey and later France.

In İnaç's opinion, regardless of positive statements, Greece still sees Turkey as a threat. Yet, still, it would be wrong to assume that the country can only act on its own interests, considering the conditions that it suffers.

"It is a bankrupt country that has no power without bigger states that support it such as the U.S. and Germany. It has no voice in the EU. It is under the shadow of bigger powers. When there are no foreign powers to support it, Greece has no self-determination," İnaç said. Greece's economy shrank by a quarter, and poverty and unemployment levels soared during the country's nearly decade-long financial crisis. Although its finances are on the mend and the economy is expected to grow by 2.2% this year, it still has a long way to go to make up the economic output lost.

According to political scientist Oğuzhan Bilgin, however, these statements are nothing but diplomatic rhetoric.

"These statements have turned into a diplomatic tradition between the two countries. [Former Prime Minister Alexis] Tsipras also had similar ones back in his time. This is just procedure," he said. Still, it is worth mentioning that some issues that Mitsotakis mentioned might lead to concrete steps and have a real influence on bilateral ties. Speaking to a French magazine following his election, the new prime minister said that extradition policies would be changed; the newly elected prime minister said that those who do not have the right to asylum in Greece would be extradited to their home country, Turkey. Mitsotakis said that the Dublin agreement needs to be reformed and the extradition policies of EU member countries should be compatible with each other. Yet, since these reforms cannot be achieved at short notice, the prime minister decided to issue his own reforms, which are expected to enable the extradition process to work more quickly and efficiently.

Promises on extradition of FETÖ fugitives not serious

Yet, in Bilgin's opinion, these words are also nothing but empty talk that do not carry any serious value.

"I believe the statements regarding FETÖ were nothing but mere words and have no reflection in reality. However, it is surprising to see that a country like Greece, which has struggled with coups for quite a time, would embrace such a negative stance against Turkey's demands for fugitives. It seems like Greece has a hostility that is specifically against Turkey," he said.

FETÖ and its U.S.-based leader Fetullah Gülen orchestrated Turkey's defeated coup of July 15, 2016, which left 251 people killed and nearly 2,200 injured. FETÖ was also behind a long-running campaign to overthrow the state by infiltrating Turkish institutions, particularly the military, police and judiciary. Greece has been a major destination for prominent figures linked to the terrorist group fleeing Turkey. Ekrem Dumanlı, editor-in-chief of the FETÖ mouthpiece newspaper Zaman, as well as Cevheri Güven, a journalist involved in a plot by FETÖ to implicate a politician in a sex tape scandal, were among those who fled to Greece after investigations were launched against them in Turkey. Dumanlı is believed to be in the U.S., while Güven still resides in Thessaloniki. Turkey has repeatedly accused Greece of being a haven for terrorists that committed crimes against Turks. Although the two countries are looking to fix strained ties, Athens has recently angered Ankara over a string of decisions on asylum and the release of terror suspects wanted by Turkey. For instance, eight soldiers involved in the 2016 coup attempt that fled to Greece were released by the country's authorities despite repeated extradition requests from Turkey. Most recently, the country also released two other suspects involved in the 2016 coup attempt.

In Bilgin's opinion, this hostility comes from the historical roots of both countries.

"Just like every other nation state that has been founded following the dispersion of an empire, Greece's founding principles are based on anti-Turke

y sentiments since it represents the empire that it separated from, the Ottoman Empire," noted, adding that when it comes to this perspective over Turkey, it does not make a real difference whether there are leftists or right wing politicians in the Greek government.

İnaç sees this negative stance of Greece as yet another result of international influence over the country's diplomatic policies.

"Tsipras also wanted to extradite the FETÖ fugitives. However, the powers that were supporting Greece did not let him. Greece would not like to have yet another problem with Turkey over these fugitives normall​y," he said.

Turkey 'should not step back' on Cyprus

When it comes to Cyprus, another crucial topic that has made ties between the countries tense for decades, İnaç said that in the Eastern Mediterranean, Greece would do anything to come up with an anti-Turkey coalition. The EU would also support it. "As long as Turkey's strong stance continues, maybe Greece or other countries may come up with yet another deal to solve the issue. There is one thing to say: Turkey should not step back, no matter what," İnaç said.

"Yet," he said, "there are also the anti-Turkey sentiments that were mentioned before."

In a joint news conference with Greek Cypriot leader Nicos Anastasiades on Monday in Cyprus, where he was paying his first visit abroad as prime minister, Mitsotakis said there would not be a solution to the Cyprus issue as the long as Turkish military forces stay on the island.

The visit of Mitsotakis on the island comes amid tensions with Turkey and the Turkish Republic of Northern Cyprus (TRNC) over energy exploration activities in the Eastern Mediterranean, with Turkey sending out two ships to seek out underwater resources.

Turkish Cypriot Foreign Minister Kudret Özersay responded immediately, saying that the Greek prime minister should not forget that the Turkish military presence in Cyprus is because of a coup and an invasion attempt by Greece on the island. Turkey has consistently contested the Greek Cypriot administration's unilateral drilling in the Eastern Mediterranean, asserting that the TRNC also has rights to resources in the area.

In 1974, following a coup aimed at Cyprus's annexation by Greece, Ankara had to intervene as a guarantor power. In 1983, the TRNC was founded. The decades since have seen several attempts to resolve the Cyprus dispute, all ending in failure. The latest one, held with the participation of the guarantor countries, Turkey, Greece and the U.K., ended without any progress in 2017 in Switzerland. Still, Bilgin also thinks that despite this hostile stance by Greece, there can actually be a deal on Cyprus that would create a win-win solution "as long as the two sides are ready to compromise."

"However, the Greek side does not give a green light on anything like that. They do not want to sit at a table with the Turkish side. Even if they do, they think that they should not compromise on anything with Turkey. During the time of the Annan plan, Turkey made many compromises. Still, it could not reach any conclusion," he said.