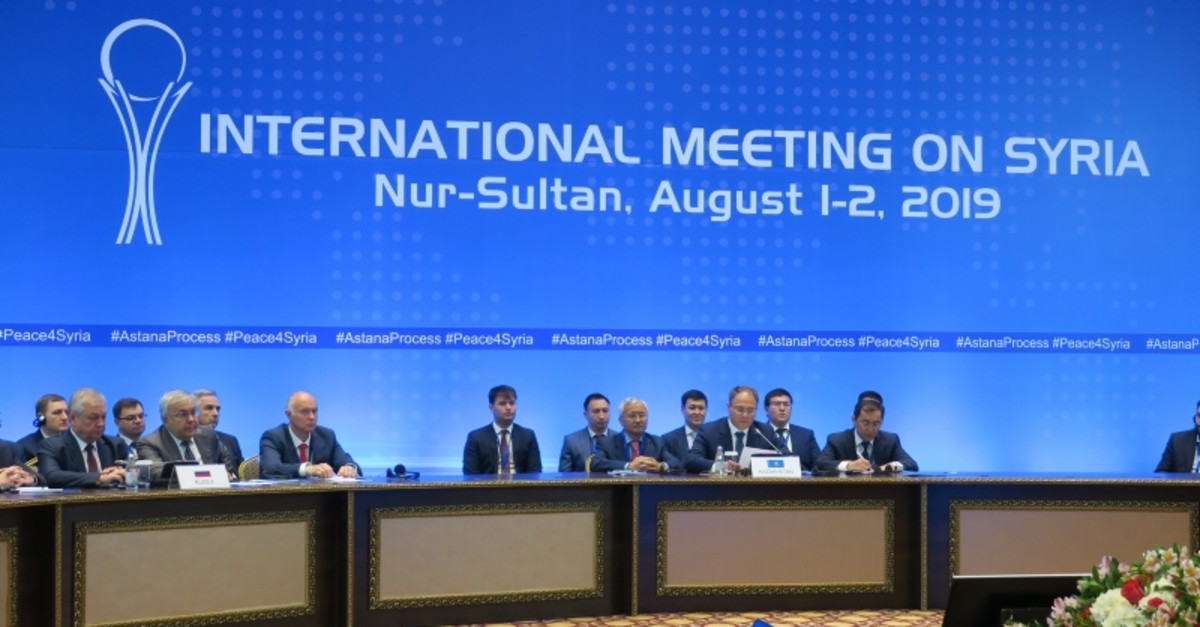 The 13th round of Syria peace talks in Kazakhstan capital Nur Sultan, formerly Astana, concluded on Friday with a decision to step up joint efforts to prevent civilian casualties in Idlib.

On the second day of the meeting, the parties held bilateral and trilateral meetings to agree on the final declaration.

The declaration was read out at the main session attended by the representatives of Turkey, Russia, Iran, Syrian regime and opposition, Kazakh Deputy Foreign Minister Roman Vasilenko.

It highlighted the parties' commitment to Syria's territorial integrity, independence and sovereignty, underlining that the fight will continue against all kinds of terrorist groups.

The parties, which rejected the occupation of the Golan Heights, stressed that all relevant international resolutions should be respected, especially U.N. Security Council Resolution 497.

The statement also stressed that security and stability in the region can only be achieved by respecting the sovereignty and territorial integrity of Syria.

Without preconditions, it said, humanitarian aid needs to be delivered to the people in Syria and called on the international community, especially the UN, to increase aid.

Turkey, Russia and Iran highlighted joint efforts to prevent violations of the cease-fire in Idlib, underlining that the fight will continue against the presence of Al-Qaida-linked Hayat Tahrir al-Sham, formerly known as Nusra Front and Daesh.

In the declaration, the parties expressed grief over civilian casualties and decided to take concrete measures to protect military personnel of the guarantor countries as well as civilian population.

The participation of neighboring countries, Iraq and Lebanon, for the first time to the high-level meetings on Syria as observers was welcomed by the parties.

The guarantor countries voiced their satisfaction with the formation of the constitutional committee and expressed their readiness for facilitating the meeting of the committee as soon as possible.

"In the meeting, the parties expressed satisfaction on the progress towards the establishment of the Constitutional Committee. They reiterated their commitment to conclude the formation of the Committee at the earliest and to convene it in Geneva," Turkish Foreign Ministry said Friday in a statement.

The ministry highlighted Turkey's support to the ongoing efforts in close coordination with the Syrian opposition and the United Nations.

The ministry also said the parties reiterated "their commitment to the Sochi Memorandum of 17 September 2018" in order to preserve Idlib's de-escalation area status and to stabilize the region.

The parties deplored the increasing civilian casualties as a result of the attacks and agreed to take concrete steps for securing their military personnel in the area, according to the ministry.

"Turkey has expressed grave concern for regime's deliberate targeting of civilians and civilian infrastructure under the pretext of combating terrorism and has stressed its expectation that these attacks must cease immediately," it added.

The parties also rejected separatist agendas that pose threat to the political unity and territorial integrity of Syria, and to the national security of the neighboring countries, the ministry said.

The parties stressed their objection to all attempts to create new realities on the ground under the pretext of combating terrorism, including illegitimate self-rule initiatives, it added.

The ministry said "the Working Group on the Release of Detainees/Abductees, Handover of Bodies and Identification of Missing Persons" convened on the sidelines of the meeting.

Turkey stressed its expectation to respect the working group's rules of procedure for future operations of mutual and simultaneous release of persons detained by the opposition groups and the regime.

The first meeting in the Astana format for reaching a cease-fire in Syria was held in January 2017.

After a Sept. 17 meeting in Sochi between President Recep Tayyip Erdoğan and his Russian counterpart Vladimir Putin, the two sides agreed to set up a demilitarized zone -- in which acts of aggression are expressly prohibited -- in Idlib.

Under the deal, opposition groups in Idlib will remain in areas where they are already present, while Russia and Turkey will carry out joint patrols in the area to prevent a resumption of fighting.

Despite the cease-fire agreement, the Assad regime and its allies have continued their low-intensity attacks on Idlib's de-escalation zone.

The conflict in Syria began in 2011 when the Assad regime cracked down on demonstrators with unexpected ferocity.