Turkey will not back down on serving as TRNC's guarantor 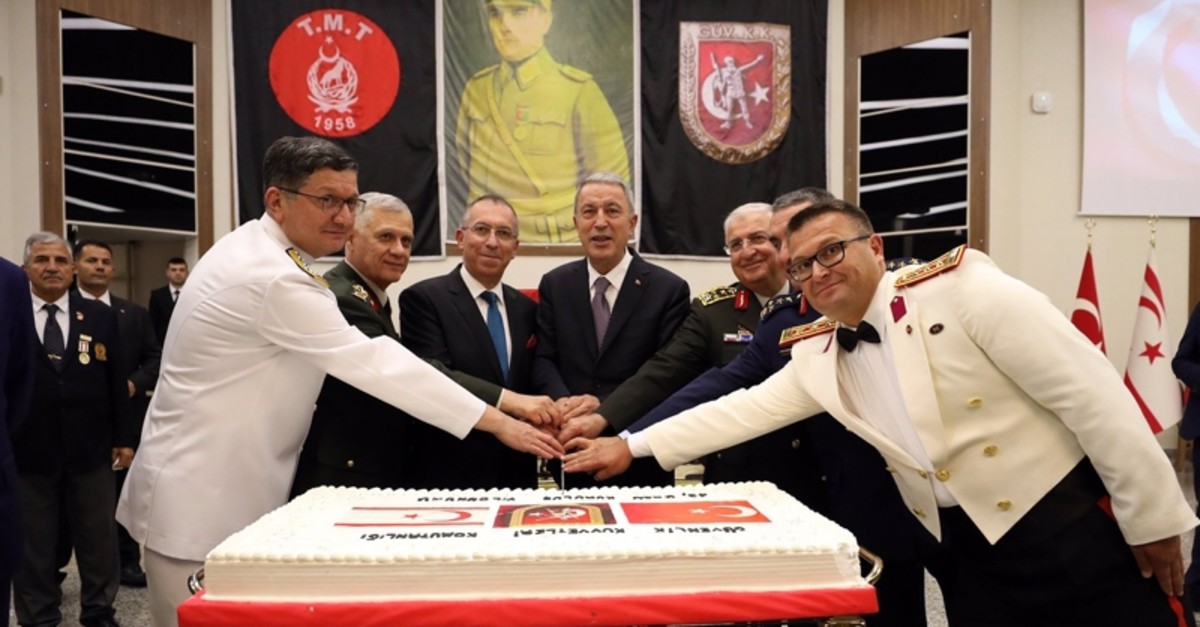 National Defense Minister Hulusi Akar attends a reception at the Veteran Officeru2019s Club due to the u201cAug. 1 Social Defiance Festivalu201d celebrated as the TRNC Armed Forces Day, August 1, 2019.
by Daily Sabah Aug 03, 2019 12:07 am

National Defense Minister Hulusi Akar reiterated on Thursday that Turkey will continue to be a guarantor and protector of the rights and interests of the Turkish Republic of Northern Cyprus (TRNC).

"The efforts to alleviate Turkey's guarantor position with a variety of statements are futile. Turkey is a guarantor on the island of Cyprus and will use this right as effectively as possible," Akar said, during a reception at the Veteran Officer's Club due to the "Aug. 1 Social Defiance Festival" celebrated as the TRNC Armed Forces Day.

He expressed that both Turkey and the TRNC have demonstrated their support for peace and stability on every occasion until today and that Turkey continues to do so. Akar, said that the Greek Cypriot Administration of Southern Cyprus (GCASC) turned down an offer to establish a joint committee for the hydrocarbon activities in the eastern Mediterranean and continued his words by saying "We have done and continue to do our part. Everyone needs to bear in mind that we take our power from international law." He also said that it is possible to create a fair sharing of the natural resources within the framework of positive neighborhood relations. Since this spring, Ankara has sent two drilling vessels, the Fatih and most recently the Yavuz, to the Eastern Mediterranean, asserting the right of Turkey and the TRNC to the resources of the region. Turkey's first seismic vessel, the Barbaros Hayrettin Paşa, bought from Norway in 2013, has been conducting exploration in the Mediterranean since April 2017.

Upon these developments, the European Council published a final declaration on July 15 following a meeting of the EU's Foreign Affairs Council attended by foreign ministers of member states. The council said in the statement that in light of Turkey's "continued and new illegal drilling activities," it would suspend civil aviation negotiations and "agree not to hold the Association Council and further meetings of the EU-Turkey high-level dialogues for the time being."

In this regard, Foreign Affairs Ministry spokesman Hami Aksoy stated yesterday that "We are going through a rough patch with the European Union. Unfortunately, the EU has degraded our relations to the Cyprus dispute. They are trying to impose upon us the extreme demands of the Greek and Rums under the pretense of unity and solidarity. On July 15, some decisions concerning our activities in the Eastern Mediterranean were taken in a meeting. These have no validity for us," on Friday in a press conference at the Ministry of Foreign Affairs. He continued by saying that the new leader cadre of the EU has begun to shape – some of which talked to the Minister of Foreign Affairs on the phone – and that Turkey expects a more visionary stance from these new leaders regarding Turkey-EU relations.

Furthermore, Aksoy explained that this issue has two dimensions. "The first one is the issue of limiting the scope of authority in the Eastern Mediterranean and the second one is to guarantee the rights of Turkish Cypriots." In 2004, Turkey registered its continental shelf in the presence of the United Nations and then started drilling and exploration activities.

"Regarding the second dimension, as you know, Turkish Cypriots are joint owners of the island and have equal rights. As long as these rights are not guaranteed, we will continue our activities," Aksoy said. It was also mentioned that it is not necessary to wait for a solution of the Cyprus dispute in this matter. "If Turkish Cypriots take advantage of the natural resources when Greek Cypriots do, the problem is solved."

The TRNC made a suggestion regarding the issue on July 13, however, the Greek Cypriots declined the offer as they did in 2011 and 2012.