US appreciates efforts of Turkey, Russia for truce to stop attacks targeting civilians in Idlib 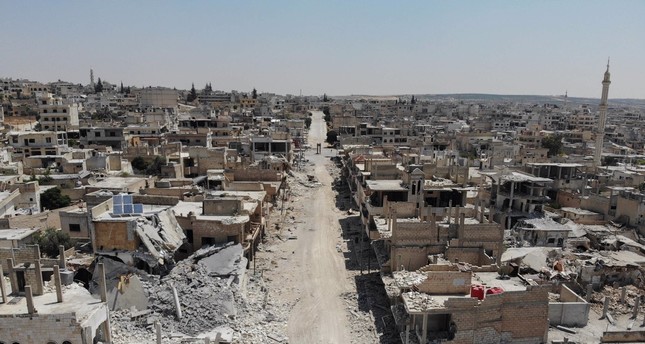 An aerial view shows buildings destroyed by Syrian regime attacks in the town of Khan Sheikhun in the southern countryside of Idlib, Aug. 4, 2019.

The U.S. appreciates Turkey and Russia's efforts to reach a cease-fire in Idlib's de-escalation zone and underlined that the attacks targeting civilians must stop

Following the Syrian regime's announcement of a conditional truce in northwestern Syria's Idlib as a result of talks in Kazakhstan, the U.S. expressed its contentment saying that it appreciates the efforts of Turkey and Russia. The cease-fire agreement was brokered by representatives of the armed opposition, the Syrian government and foreign participants Russia, Turkey and Iran, after talks in Kazakhstan.

However, in a written announcement on Saturday, U.S. State Department spokesperson Morgan Ortagus said, "The U.S. welcomes the news that a cease-fire has been declared in Idlib, but what is truly critical is that the attacks against civilians must stop. We will appreciate any efforts undertaken toward this important goal." She also indicated that the U.S. will continue to support the search for a political solution led by the United Nations.

Turkey, Russia and Iran, the three guarantors of the Astana peace process, met Thursday in the 13th meeting held in Nursultan, the capital of Kazakhstan, for technical talks before the trilateral Astana meeting, which will be held in Istanbul this month.

In a statement on Friday, the Ministry of Foreign Affairs spokesperson Hami Aksoy said that Ankara had "expressed grave concern for the regime's deliberate targeting of civilians and civilian infrastructure under the pretext of combating terrorism and has stressed its expectation that these attacks must cease immediately."

Last year, the Sochi agreement was reached on Sept. 17 by President Recep Tayyip Erdoğan and his Russian counterpart Vladimir Putin. According to the agreement the cease-fire in the Idlib region will be preserved, with the withdrawal of heavy arms and radicals from the region. However, even though the region of Idlib was declared a de-escalation zone, the attacks of the Syrian regime and Russia continued unceasingly on the last opposition-stronghold leading to the death and displacement of hundreds of thousands of people.

The Astana guarantor countries – Turkey, Russia and Iran – will meet for the fifth summit on Sept. 11 in Ankara. The main topics on the agenda are the developments in Idlib, the "Peace Corridor" to be established along the Turkey-Syria border and the Syria's political transition process. Besides, significant matters as the cooperation against terrorism, humanitarian aid and the works in progress for a constitutional committee in Syria will also be discussed.

Idlib and parts of the neighboring provinces of Aleppo, Hama and Latakia are under the control of the armed group Hayat Tahrir al-Sham (HTS), a former al-Qaida affiliate, which the Syrian regime has vowed to destroy. This is often used as a pretext to attack the de-escalation zone.

Humanitarian catastrophe grows worse, 750,000 civilians displacedSince the Sochi agreement was inked last year, nearly 750,000 civilians were displaced during violations of the cease-fire. Mohammed Hallaj, head of the Response Coordination Group in Idlib, said on Saturday: "If the attacks on Idlib's populous districts such as Maarat al-Numan, Seraqib and Ariha do not stop, we fear that the number of migrants will reach 1 million."

Furthermore, the Syrian Network for Human Rights announced that as a result of the attacks on the de-escalation zone by Russia and Bashar Assad since the end of April, 781 civilians lost their lives including 208 children and 140 women.

Besides the constant civilian deaths, civilian infrastructure, hospitals, markets and schools have also been destroyed, leaving the nearly 4 million people living in Idlib in desperate situations. Last week, the Medecins Sans Frontieres (MSF) organization even warned that this could lead to a disease outbreak.

Meanwhile, a hunger strike in London for raising awareness of the attacks on civilians in Idlib, which started last month, is still going on. "We are looking at dead children bombed in their homes, but continue our lives as if nothing has happened," said Shaza Abuwiddo, one of the activists speaking to the Anadolu Agency. "We have to stand up together and do something," she added. The strike to announce the killings in Idlib to the world and to create solidarity, takes place in front of the prime minister's office, known as No. 10 Downing Street. Abuwiddo stressed that more than 100 activists were striking in several countries and that they want the U.K. government to take initiative to stop the attacks.

Share on Facebook Share on Twitter
Previous in Diplomacy National Defense Minister Hulusi Akar reiterated on Thursday that... Next in Diplomacy Despite changing dynamics since the beginning of the civil war in...
DAILY SABAH RECOMMENDS