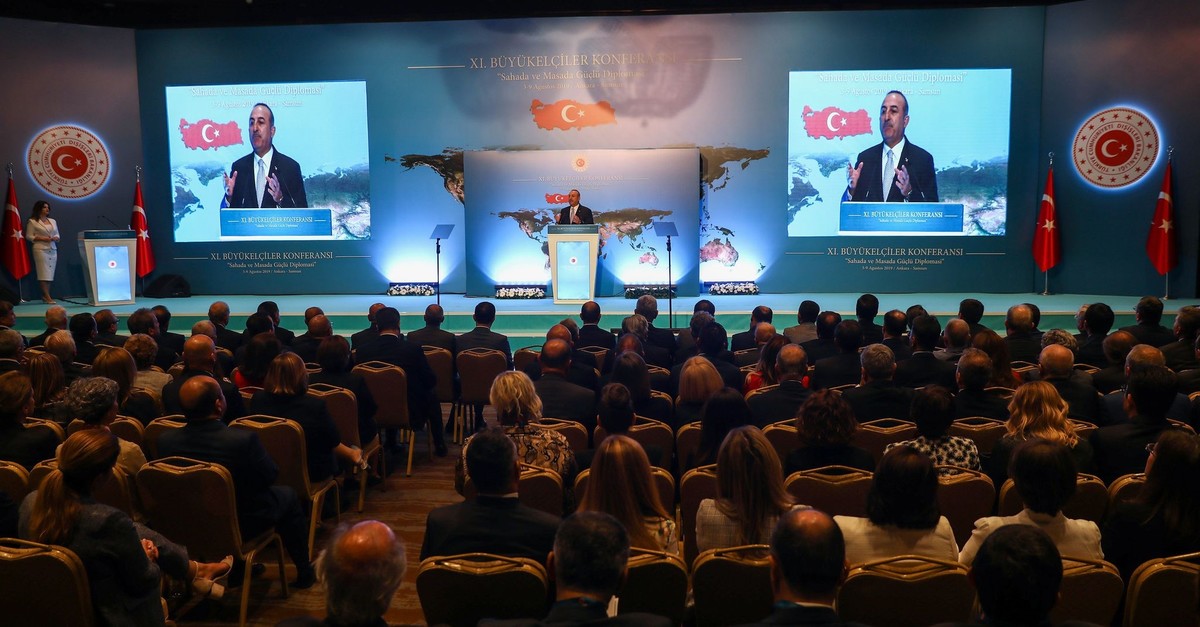 Turkey has always used its national capacities in favor of justice and righteousness, said Foreign Minister Mevlüt Çavuşoğlu at the opening of the 11th Ambassadors' Conference in Ankara Monday. Çavuşoğlu said establishing a belt where sustainable peace and development is maintained around Turkey is one of the main goals of the country's foreign policy. The 11th Ambassadors' Conference, organized annually by the Ministry of Foreign Affairs since 2008, started Saturday in the capital Ankara with the theme "Robust Diplomacy: Active on the Ground and at the Table." Some 254 ambassadors are expected to attend the meeting, along with President Recep Tayyip Erdoğan, several ministers and foreign guests. Regarding the motivations of the "Initiative and Humanitarian" foreign policy, Çavuşoğlu said: "We are a member of NATO and the European Council.

"This approach will reflect the basic features of our humanitarian and entrepreneurial foreign policy, which is strong in the field and on the table," he added.

He said "Asia Anew" would include cooperation on education, defense industry, investments, trade, technology, culture and political dialogue. Çavuşoğlu underlined that Turkey's main goal with the "Asia Anew" initiative was not an "axis shift."

"Now our Western friends will start complaining again saying, 'What's going on? Is it an axis shift in your foreign policy? Has Turkey turned its back to Europe and faced to another place? Then let me ask you this: 'Do you shift the axis of your foreign policy when you go there [Asia]? Why does it become an axis change when Turkey goes there?" Çavuşoğlu said adding that Turkey is the axis itself.

Çavuşoğlu also said that establishing a belt where sustainable peace and development is maintained around Turkey is one of the main goals of the country's foreign policy.

The 11th Ambassadors' Conference, organized annually by the Ministry of Foreign Affairs since 2008, started Saturday in the capital Ankara with the theme "Robust Diplomacy: Active on the Ground and at the Table." Some 254 ambassadors are expected to attend the meeting, along with President Recep Tayyip Erdoğan, several ministers and foreign guests.

Regarding the motivations of "Initiative and Humanitarian" foreign policy, Çavuşoğlu said: "We are a member of NATO and the European Council. We are part of European law and security system. We are in the east and west, north and south. As Turkey, we stand strong, with our nation, as an assurance of regional peace and prosperity."

The minister pointed out that Turkey has been through one of the most difficult eras of all time. He said there was a major transformation in the regional and global scale in the last decade. "Economic and political power struggle in regional and global scale ignites crisis and causes new escalations, upheavals, and tensions. Multi-polarity is driven back. International institutions which are supposed to maintain global peace and prosperity are ineffective. Therefore, there is authority and power vacuum which is abused by terrorists mostly," he added.

Pointing out one of Turkey's most critical foreign policy issues, the latest developments surrounding the Eastern Mediterranean and Cyprus, Çavuşoğlu said, "Turkey never ignores any solutions on Cyprus as it is a national cause for us."

"Cyprus is our national cause. The equality and security of the Turkish Cypriot people are indispensable. On this basis, we do not exclude any solution. Our message to everyone interested in the [Eastern Mediterranean] region is the same. If you cooperate with us, everyone wins. Turkey will never allow steps that ignore the legitimate rights and interests of Turkey and Turkish Cypriots in the Eastern Mediterranean, the junction of three continents of the world," he said. He stressed that Turkey backs a common solution in which the resources are equally shared.

Turkey to defend Palestinian cause at all costs

Çavuşoğlu said the factors that led to the Arab Spring still continues. He said the Palestinian-Israeli conflict and security situation in the Persian Gulf was going through a "critical period."

"In a period when embracing the region is needed the most, it is very unfortunate to see the region's countries so far from being united. Turkey will continue to defend the Palestinian cause at any cost," he added.

Balance cannot be maintained without peace in Iraq, Syria

Pointing out other crisis areas in the region, Çavuşoğlu said without sustainable peace in Syria and Iraq, regional balances will not be compensated.

"The reconstruction of Iraq is the most historical project of the 21st century. Thus, every country has to take on responsibility as we are doing all we can to restore Iraq. We are ready to sit down for cooperation, talk brotherly and solve the problems," Çavuşoğlu said.

Summarizing Turkey's efforts to end eight years of conflict in Syria, Çavuşoğlu said Turkey has applied for every possibility to block the regime's attack on civilians in Idlib by continuing diplomatic efforts through the Astana and Sochi processes along with Russia and Iran. "About 340,000 Syrians have returned to their country with our efforts and Operation Euphrates and Operation Olive Branch to clear the area from Daesh and PKK's Syrian affiliate People's Protection Unit (YPG) terror. We will continue to fight this terror with the same amount of determination which threatens our national security" Çavuşoğlu said and warned: "I call the whole world to support our efforts in order to prevent the regime and its supporter's attacks on civilians. Otherwise, there is a high possibility that we can face a new humanitarian tragedy worse than in 2015."

We want US to end its friendship with PKK in Syria

On Turkey's war on terror, Çavuşoğlu said Turkey expects cooperation and concrete steps from its allies in dealing with its adversaries.

"We continue our fight against the Gülenist Terror Group (FETÖ). FETÖ-linked schools have been shut down in 22 countries. We are tracking them down and seizing their economical means," he said.

Çavuşoğlu also called on the U.S. to stop backing the YPG and accepting Turkey's extradition request on FETÖ members living in the U.S.