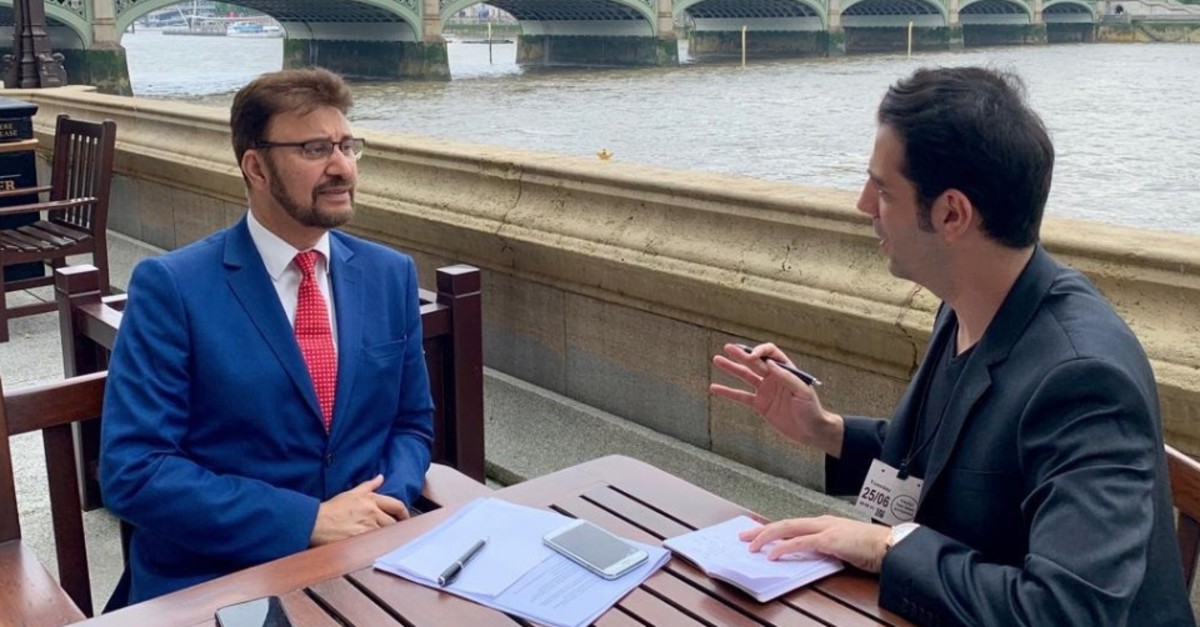 According to Afzal Khan (L), it is unfair for the West to have the perception as if refugees are responsible for everything.
by Oğuzhan Bilgin Aug 07, 2019 12:28 am

Last month, a new figure, Boris Johnson, became the prime minister of the United Kingdom and moved into No. 10 Downing Street. As this major change is expected to have an effect on the U.K.'s stance on various topics, from the refugee crisis to Brexit, Daily Sabah conducted an interview with Afzal Khan, a member of Parliament from the main opposition Labour Party for Manchester Gorton and the shadow immigration minister."The first thing is, I want to commend Turkey," Khan said, when he was asked about his opinion about the refugee crisis. "It's really impressive that the country [Turkey], as a single country, has taken more refugees than all of Europe put together. That is impressive. And you have to give credit where it is due," he underlined.

Khan also expressed that while Turkey was offering up this impressive performance when it comes to the refugees, Europe, including the U.K., continued to constantly fail the refugees through its policies.

"On Europe as a whole, including Britain, I think it would be fair to say that we failed refugees. We have failed to carry our share of the burden. Again, it shows why the system is breaking down, when you end up with 70 million people being displaced and then a good 80% of that is been carried by developing countries, something is not right. Those who are least able are having to carry the most burden on their shoulders," he said.

"How is that right or fair? So, I think as a world, we need to look at this at a deeper level. How do we have policies which do not encourage wars and encourage peace instead. How do we have policies which prevent the disparity between the rich and the poor? So, the world as a whole is much fairer. And that would take some of these pressures off," Khan added, reiterating that the number of refugees that the U.K. received did not even reach the initially planned figure.

"What we said was we would take in about 20,000. We have not quite got there. The children again I think it is about 3,000, which is another target the Conservative government has missed," he said, indicating that the U.K. government has just introduced a new number.

"We are talking about 5,000 a year," he said. "It is nothing like Turkey, the whole of Europe doesn't match Turkey. So, don't expect Britain to do that," Khan added.

Recently, the United Kingdom has been going through a crucial transformation. After the Brexit referendum, Britain is on the edge of huge turning point that changes everything for the U.K. and British people. This is a change that exceeds the borders of the former imperial power and affects world politics in many aspects. Khan pointed out the position of the Labour Party on the Brexit process and the new leadership Boris Johnson.

Anti-Muslim discrimination is at every level in Europe

When it comes to Islamophobia, Khan said it has become a huge issue and it is getting worse. "Islamophobia causes a pressure on Muslims that forces them to prove themselves that they are not 'bad' and 'terrorists' in daily and political life. This leads to discrimination on every level. There are 1.5 billion of Muslims in the world and how could all these Muslims, having different visions, ethnicities, cultures, nationalities be blamed for the behavior of a small group?" Khan asked.

Underlining that Islamophobia and xenophobia are primary dynamics behind the rise of the far-right, Khan said that this rise can be seen not just in the U.K., but around the world.

"It is hard to believe that someone like [Donald] Trump is now the president of the U.S. I will therefore continue raising the growing concerns over Islamophobia in Parliament," he expressed.

According to Khan, after careful analysis, one realizes that immigration does not cause the difficulties in society.

"The current difficulties from the last eight to 10 years are actually linked with financial crises in the world. So, blaming immigrants is not right, nor is it fair, it's not a true diagnosis of the issue. The Conservatives have repeatedly used the financial crash as an excuse to hit hard at public services," he said.

Triumph of Turks in July 15 coup attempt a major event

Khan said he is "happy with the U.K.'s support for Turkish democracy and Turkish people," referring to the July 15 coup attempt and the U.K. backing the country in the aftermath.

"The triumph of Turkish people against the coup was a huge incident. Turkey is a very important country for world politics, and I believe there is potential for further strengthening of U.K.-Turkey relations," he said.

Concerning Turkey's relations with other countries, especially the U.S., Khan said Turkey is a key country and a NATO member.

"The U.S. should be aware of Turkey's importance, and Turkey could not be sacrificed for any reason. If the U.S. loses Turkey and Turkey builds a deeper partnership with Russia and China, we would all be the losers of this game," he said.

"Turkey made remarkable progress on many levels: economic, social, and political. Think about the issues of human rights and democracy in Turkey in the past. Women with headscarves were banned from education… Erdoğan is a strong leader who removed this anti-democratic ban and managed to make these improvements. But Turkey is still seen as place of 'contradictions of modernity and Islam' by Western media, who see Turkey as liberal and modern, but see Erdoğan's strong leadership as antidemocratic, whilst ignoring that he was democratically elected," he said.

'Johnson pushing for no-deal with EU'

Regarding Brexit, Khan said, in his opinion, the referendum as well as the results have "completely polarized" the nation. "It has been three years since the referendum result… but three years down the road and we are still as polarized as we were then, and no one has managed to bring nation together. I am disappointed with the lack of progress and now with Boris Johnson as prime minister, he is pushing us to a scenario where a no-deal seems likely," he said.

According to Khan, the results of the referendum show that "both Labour and Conservative constituencies voted for remain and leave, meaning that there were no homogeneous groups."

"I can illustrate this with an analogy. If someone has been in a marriage for 30-40 years and for whatever reason you decide to go separate ways that decision may be easy but actually when going through the act you realize the deep and different ways you are connected and that pulling that apart is painful, it is not easy," he exemplified. "I think it has been difficult for the Labour Party as well," he continued, "just like for the country."

"The Labour Party is a broad church. It has people who support Brexit and those who want to remain in the EU. As a democratic party we were in a difficult position after the referendum, and I think we still are. We respect the result of the referendum. We've been doing our best but at the same time, you know when you campaigned for remain and when the center of gravity in our party is remain, it's not easy," he said.

Khan further underlined that as the world is changing, any country would react concerning these changes, including the U.K. "It is getting more complex, not like the Cold War era. The Brexit process should also be considered in this international context, not only on a national level," he said.