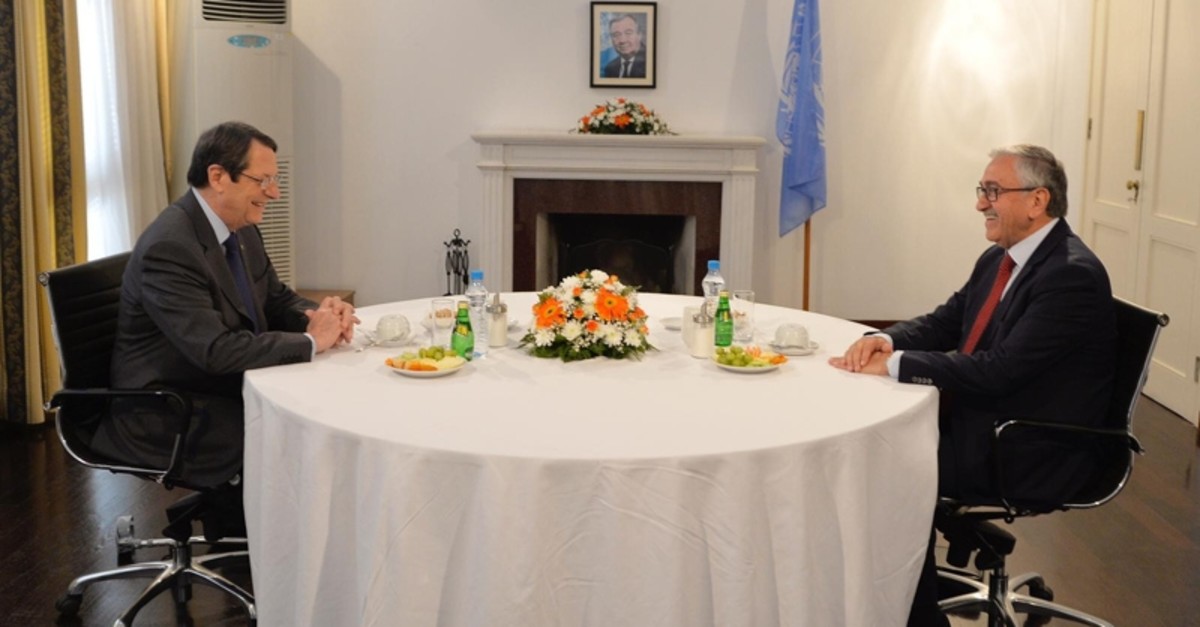 The decision came after Akıncı and Anastasiadis met in the buffer zone at the official residence of Elizabeth Spehar, the U.N. head of peacekeeping force in Cyprus. Their meeting lasted 3.5 hours.

Speaking to reporters after the meeting, Akıncı said that they had a constructive dialogue, noting although there are still some issues they haven't reached an agreement upon such as the hydrocarbon issue, they "strive to find ways to overcome these difficulties through dialogue."

Akıncı said that a proposal was made by the Greek Cypriot side regarding natural gas, however "it was only a committee proposal to exchange information," adding that this proposal does not offer a way out.

He noted that if a one side continues to see hydrocarbon issues as a part of its sovereignty, taking advantage of the fact that it is the only recognized state, and keeps promising the other that it will give it rights when the time comes, the other side had no choice but to seek and protect its own rights, adding that this is what the TRNC is doing right now with partnering Turkey.

Akıncı said that the Greek Cypriot leader's proposal on establishing a joint committee on Maraş issue has been discussed during the meeting as well, however since they did not see "a more serious approach to the hydrocarbon issue from the Greek Cypriots," it would not be possible to develop different approaches to the Maraş issue as well.

Akıncı said that some confidence-building measures between the two communities were also discussed during the meeting, adding that these issues will gain clarity after they meet with U.N. Secretary-General Antonio Guterres. He said they must continue their commitment to past agreements.

There will be separate meetings between Guterres and both leaders in New York at the end of September or at the beginning of October, as Guterres announced, Akıncı confirmed, adding that they also expect Jane Holl Lute, the interim special adviser appointed by the U.N. secretary-general to form reference concepts to once again visit the island at the end of this month or early September.

The U.N. has sought a peace deal to unite Cyprus under a federal umbrella that could also define the future of Europe's relations with Turkey, a key player in the conflict.

Cyprus has been divided since 1974 when a Greek Cypriot coup was followed by violence against the island's Turks, and Ankara's intervention as a guarantor power.

The coup followed decade-long interethnic violence and terrorism targeting Turkish Cypriots, who were forced to live in enclaves when Greek Cypriots unilaterally changed the constitution in 1963 and stripped the island's Turks of their political rights. The decades since have seen several attempts to resolve the Cyprus dispute, all ending in failure.

On June 18, the TRNC decided after 45 years to open the ghost town of Maraş near Famagusta (Gazimağosa) for settlement amid heightened tension in the Eastern Mediterranean.

What was once a paradise of luxury cars, hotels, villas, superb beaches and a destination for the rich and famous turned into a desolated place after the 1974 coup. Maraş is located on the "Green Line," which is the present-day border between the two communities and was closed for settlement subsequent to a U.N. decision in 1974. The city is protected by a 1984 U.N. Security Council resolution, stating that the empty town can only be resettled by its original inhabitants.