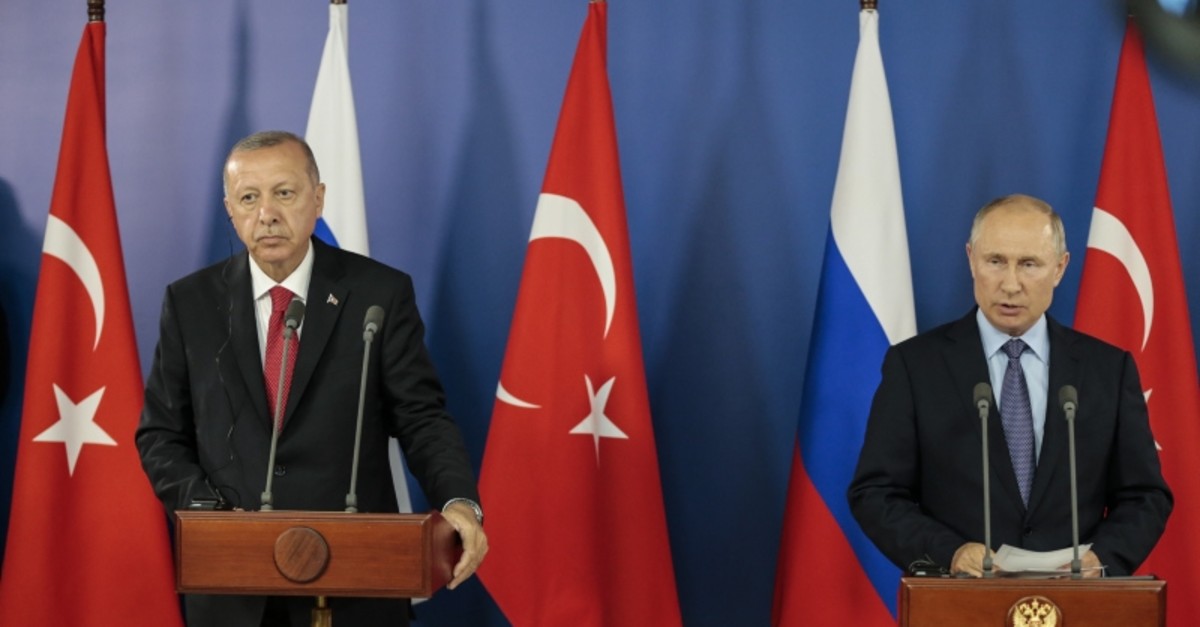 Turkey and Russia expressed their concerns over the escalating violence in northwestern Syria's Idlib province on Tuesday while both underlined their commitment to the country's territorial integrity.

President Recep Tayyip Erdoğan and Russian President Vladimir Putin met for talks in Moscow on Tuesday as they seek common ground on the deadly fighting in northwestern Syria.

"Last year, at a very critical time, we had a deal with Russia and prevented the humanitarian crisis in Idlib. However, regime attacks that have been threatening peace in the region since May," Erdoğan said during the joint press conference with Putin.

"Since May, more than 500 civilians have lost their lives in Idlib during the regime attacks while more than 1,200 civilians have been injured," Erdoğan reminded, adding that Turkey's right to self-defense leads the country to defend itself throughout its border. "We have to take the steps when it is mandatory to take them. We have a threat of migration flow towards our borders," the president further underlined.

Their meeting in Moscow took place a day after Erdoğan said Turkey was ready to send ground troops into northern Syria "very soon" in order to keep its borders safe.

The escalating violence in Idlib has shattered a deal reached in September between Russia and Turkey to establish a buffer zone.

Despite eight months of calm provided by the Sochi deal between Turkey and Russia in September, the regime, backed by Moscow, intensified its attacks starting April 26 under the pretext of fighting al-Qaida linked Hayat Tahrir al-Sham (HTS) terrorists holed up in Idlib. Since then, the situation has gotten even worse, taking more civilian lives. Residential areas have been destroyed by indiscriminate attacks, while numerous educational facilities, health facilities and residential areas have collapsed or have become unusable after being targeted by bombs. While clashes are ongoing in southern towns, it is expected that people will flock to the Turkish border in case attacks move toward northern parts of Idlib.

Hosting nearly 4 million refugees, Ankara often warns the international community and regional countries that a new offensive could trigger a fresh refugee wave toward the West.

The meeting came also ahead of a Sept. 16 summit in Ankara that will bring together the main foreign players in Syria's conflict, Putin, Erdoğan and Iran's President Hassan Rouhani.

Mentioning the Sochi deal that was signed with Russia last year, Erdoğan said that only way to make the terms of the deal real is to prevent regime's attacks.

'It is not acceptable for regime to target civilians'

"It is not acceptable for regime forces to target the civilians," he added, underlining that the threat posed by Bashar Assad's regime had reached a point that it targets Turkish soldiers in the region.

Regime troops have encircled opposition forces and a Turkish military observation post near the town of Morek in northwest Syria in an offensive to reclaim territory and towns the regime lost early in the war. Turkey has supported some opposition factions in the northwestern Idlib region, while Russia and Iran back the Assad regime.

Last week, regime forces recaptured Khan Sheikhoun, which is located on the Damascus-Aleppo highway. Regime and Russian aircraft have since been pounding the area around Maarat al-Numan, the next stop north along the same road, in apparent preparation for a further ground push, the Syrian Observatory for Human Rights monitoring group says.

As well as putting Turkish troops in the region in the firing line, the advances of Assad regime forces have threatened Ankara's hopes of preventing a fresh wave of refugees on its southern border.

The United Nations says more than 500,000 people have been uprooted since the Syrian regime began its offensive in late April, most of them escaping deeper into the rebel bastion and towards the border. Turkey opened its border at the start of the Syrian conflict in 2011 and now hosts 3.6 million Syrian refugees.

"We have reached the final point at the formation of the constitutional committee. We wish for Syria to reach its peace as soon as possible," Erdoğan said.

Putin also said that the works on the formation of a constitutional committee will start in Geneva as soon as possible.

"We are concerned about the developments in Idlib. We think that the region should not be a host for the terrorists. That is why we made some agreements on how to clear the area from the terrorists. But respecting the territorial integrity of the Syria is also quite crucial," the Russian leader expressed.

When it comes to the establishment of a safe zone in northern Syria, Putin said that the idea is a positive step for Syria "in terms of protecting Syria's territorial integrity."

"We very well know that Turkey's burden regarding the refugees is huge. We understand the sensitivities of Turkey very well. President Erdoğan expressed his stance on the issue very clearly today," he said.

Erdoğan, on the other hand, expressed once again Turkey's expectations from the U.S. on the issue, saying that "we want for them to make their promises real as soon as possible."

"We want the promise of safe zone to be real. As long as the harassment from the Syrian border continues [from the PKK's Syrian affiliate, the People's Protection Units (YPG)], there is no way for us to remain silent. We want the terrorists to leave Manbij. Our determination on the issue is full," the president said.

The U.S., which has designated the PKK a terrorist organization, still allies itself with the PKK offshoot YPG terrorists.

Turkey expects the creation of a 32-kilometer deep safe zone in northern Syria, which must be cleared of YPG terrorists. Ankara has warned that if the establishment of such a zone is delayed, it will take cross-border military action to remove the terrorist threat on its southern border.

The country previously conducted two offensives into Syria, against Daesh and the YPG, in 2016 and 2018. Operations Euphrates Shield and Olive Branch liberated the region from YPG, PKK and Daesh terrorists, allowing hundreds of thousands of displaced civilians to return to their homes. The YPG is the Syrian offshoot of the PKK terror group, which has been responsible for the deaths of nearly 40,000 people in Turkey, including many children, women and infants, for more than 30 years.