Opening European doorway to refugees 'not a bluff' 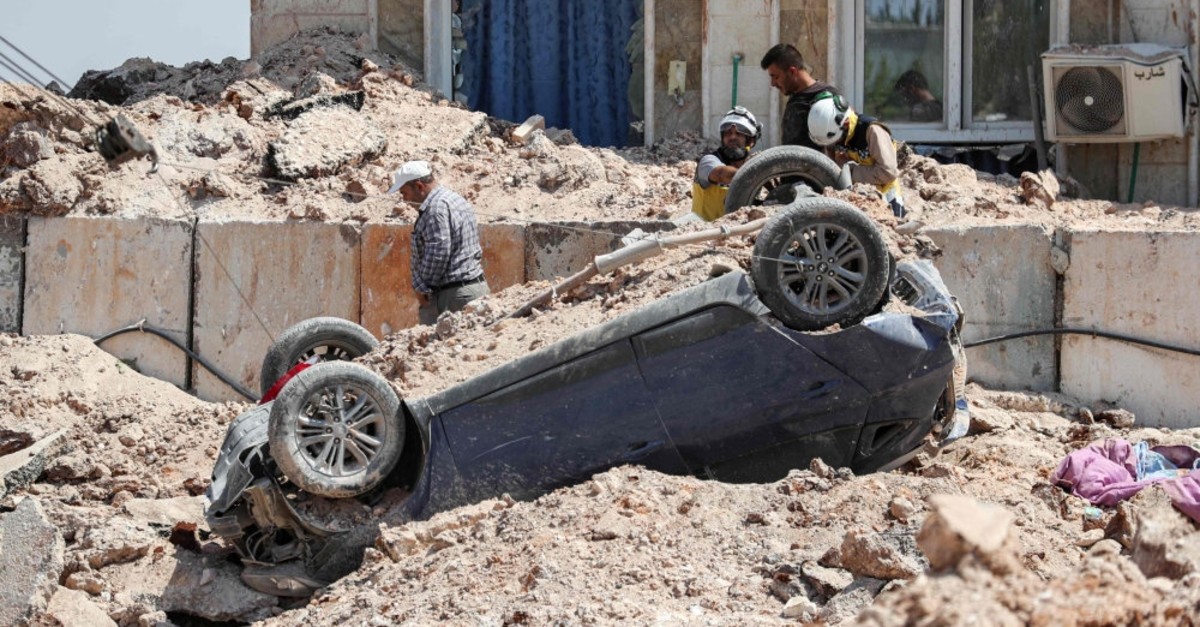 The violence since late April has killed more than 960 civilians and displaced more than 400,000 people in northwestern Syria's Idlib
by Okan Müderrisoğlu Sep 07, 2019 12:12 am

Vice President Fuat Oktay said on Friday that Turkey's warning about opening the gates of Europe to refugees was "neither a threat nor a bluff." Speaking to the Sabah newspaper on a plane ride to Italy where he will attend the Ambrosetti Forum, Vice President Oktay underlined the limits of Turkey's capacity to host refugees. His remarks came a day after President Recep Tayyip Erdoğan warned that Turkey could "open its doors" to let Syrian refugees cross to Europe if Ankara does not get the expected support in the face of the ongoing humanitarian crisis in Idlib. Oktay said the thinking that Turkey will bear a new migrant flow is "wrong." He also added that Turkey is not any other country's guardian and it won't pay the bill for the crises that other countries create. Noting that Turkey and Russia established 15 observation points in Idlib as part of the Sochi deal, he said that the regime violated the deal in the region.

"In response to the regime's intensified attacks, Turkey will reciprocate if Turkish security forces are targeted," he added. "Russia's approval and U.S. bombing have turned Idlib into a circle of fire. We are concerned; there are thousands of deaths. We see that Idlib is being destroyed like Aleppo."

The escalating violence in Idlib has shattered a deal reached in September 2018 between Russia and Turkey to establish a buffer zone.

Despite eight months of calm provided by the deal, the regime, backed by Moscow, intensified its attacks starting on April 26 under the pretext of fighting the al-Qaida-linked Hayat Tahrir al-Sham (HTS) terrorists holed up in Idlib. Since then, the situation has gotten worse, taking more civilian lives with each passing day.

Hosting nearly 3.6 million refugees from Syria, Ankara often warns the international community and regional countries that a new offensive could trigger a fresh refugee wave toward the West.

Commenting on the presence of foreign fighters in northern Syria, Oktay said: "We do not want civilians to pay the bill of involvement of various groups in Idlib. Displacing people who found a place is not meaningful. It does not contribute to the solution, but the problem."

He also criticized Western countries and said they are now trying to clear terrorist elements that were exported by them. "Foreign fighters should be extradited to their countries, and these countries should do what is necessary," he added.

Regarding the ongoing ceasefire in the region, Oktay said that Turkey is concerned with its own national security first and it uses diplomatic channels effectively. "There is an ongoing ceasefire. However, it is very fragile. We talked about this with the U.S., Russia, Iran and Europe. We do not classify terrorists. A terrorist is a terrorist. We do not want to use hard power in every case, but we won't hesitate to do so," he added.

Oktay also evaluated a possible new migration wave from Idlib and said, "If the clashes continue, there are more than 500,000 civilians who were already mobilized, and this number can reach 1 million. Their movement direction is Turkey. We are already hosting 3.65 million Syrians. We do not have the capacity to host 1 million more."

Oktay criticized the European Union, saying it is trying to gain time. He added that the financial aid that came from Europe was only 2.06 billion euros ($2.28 billion).

Also touching on the issue, Oktay said that Turkey wants to have 1 million people settle in the safe zone. "We have an institution like TOKİ, we can build the infrastructure. If they provide the financing, we will do it. Or they will face the consequences."

Since 2016, Turkey has conducted two major military operations in northwestern Syria, Operation Euphrates Shield and Operation Olive Branch, to purge the region of the terrorist groups Daesh and the People's Protection Units (YPG), which is the Syrian branch of the PKK terrorist organization.

In its more than 30-year terror campaign against Turkey, the PKK, listed as a terrorist organization by Turkey, the U.S. and the EU, has been responsible for the deaths of some 40,000 people, including women, children and infants.

Saying that nearly 400,000 Syrians returned to the safe areas Turkey provided in Syria, Oktay added: "If the process works, we will solve three problems together. The PKK and YPG in the region will be eradicated, settlement for people will be established, and a natural safety line will be built."

Responding to a question if there are signals that the U.S. is stalling in the establishment of a safe zone, Oktay said that Turkey has learnt a lot from Manbij and one lesson is that the stalling does not work.

Oktay also explained Turkey's stance in the establishment of a peace corridor in detail. Accordingly, it will be under Turkey's control, terrorist elements including the PKK, YPG and Daesh will be completely cleared, a Joint Operation Center will provide coordination, a new corridor south of the safe zone will not be allowed, and the depth will gradually be increased to 32 kilometers (20 miles).

He also reiterated that Turkey will implement its own plans if the safe zone with the U.S. is not realized in due time.

Last Saturday, President Erdoğan said in Istanbul that Turkey would apply its own plan of action if Turkish soldiers were not allowed to control the safe zone in Syria.

Russia must be sensitive about humanitarian crisis in Idlib

Oktay also called on Russia to be more sensitive in Idlib, pointing to the attacks targeting hospitals and schools.

A further 200 schools are being used as shelters for those displaced by the fighting, it added.