US safe zone steps nothing more than delusion 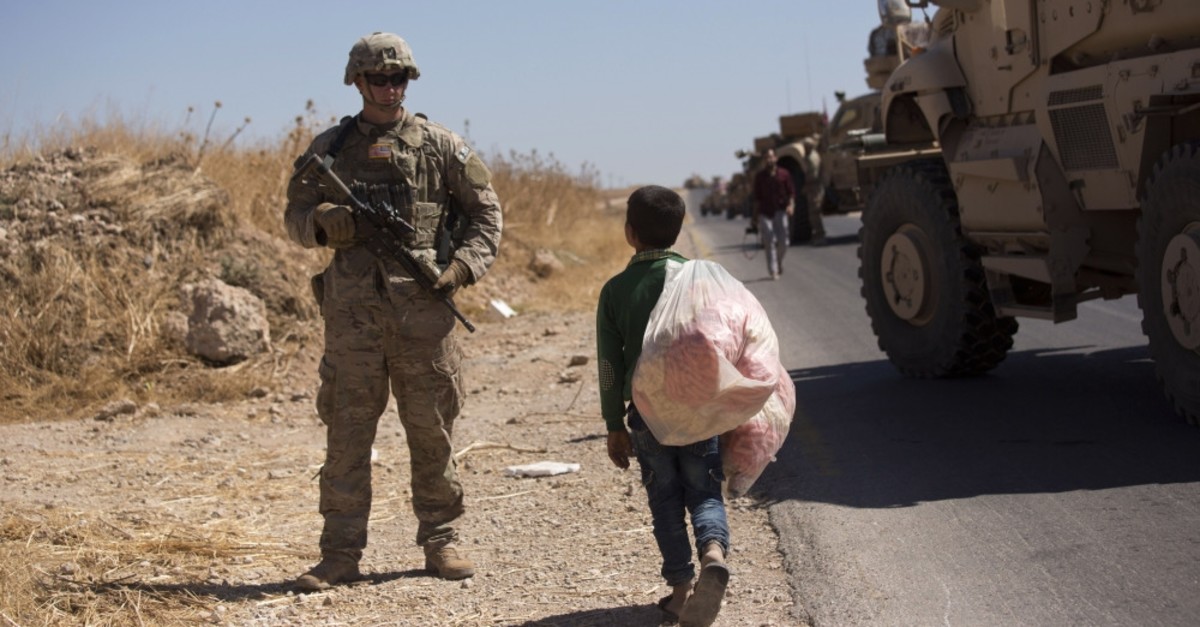 A Syrian boy selling snacks looks at a U.S. soldier standing guard during the first joint ground patrol by American and Turkish forces in the so-called ,safe zone, on the Syrian side of the border with Turkey, Sept. 8, 2019.
by Daily Sabah Sep 11, 2019 12:24 am

Despite the ongoing joint patrols with the U.S. for the formation of a safe zone in northern Syria, Turkey sees further steps as delusional, saying that its NATO ally is stalling the process

Two days after Turkish and U.S. military personnel completed the first joint ground patrol as part of the safe zone plan east of the Euphrates in Syria, Ankara continues to harbor mistrust concerning Washington's intentions. Turkish officials, notably President Recep Tayyip Erdoğan, have frequently reiterated the fact that Turkey cannot afford to make compromises or delay the issue of a safe zone due to urgent national security concerns and questions regarding the return of Syrian refugees to their country.

"There are some joint patrols currently, yes; however, the steps other than this or those said to be taken are just delusional. We see that the U.S. is trying to stall Turkey and get it used to this process," Foreign Minister Mevlüt Çavuşoğlu stated yesterday during a press conference in Ankara.

He also stressed that the U.S.' misguided steps are enhancing its engagement with terrorist organizations, empowering them further in the region.

Despite the U.S.' widely known past of labeling countries as supporters of terrorism or Washington's accusations of figures creating state-sponsored terrorism, it has been providing financial and military support to the People's Protection Units (YPG), the Syrian affiliate of the PKK, recognized as a terrorist organization by Washington itself. Underlining that clearing the agreed area of YPG terrorists is an issue of national security for Turkey, the top diplomat continued: "A compromise we make today can cause us to come up against serious threats in the future. As our president underlined, if no result is reached following the negotiations and cooperation, Turkey will enter the area unilaterally."

Speaking on the same day Erdoğan also reiterated, "What we expect from the U.S. is that they stand by our side concerning the establishment of the safe zone for the return of Syrians and the fight against terrorism." Referring to the U.S. support for the YPG under the pretext of fighting Daesh, the president stated a sustainable solution is only possible through eliminating terrorism.

"As my friend [U.S. President Donald] Trump said, Daesh was defeated in Syria – the only obstacle against our country, our region and the return of Syrians is the PKK-affiliated YPG," Erdoğan said. While Ankara and Washington launched initial patrols, U.S. soldiers were yesterday spotted carrying out patrols with YPG terrorists in northern Syria.

"Ditches are changing positions; new ones are being dug constantly, which the Turkish Armed Forces are aware of. The U.S. put a terrorist leader, who is wanted with a bounty and is responsible for the death of many Turkish soldiers, on TV and let him talk. If the U.S. wants to see a result, it has to prove it," stated Abdullah Ağar, a veteran and security expert, regarding the U.S.-YPG cooperation. Similarly, last week it was reported that YPG terrorists have been digging ditches across the border in Ras al-Ayn province in case of an operation by Turkey east of the Euphrates. The terrorist organization is also reportedly recruiting civilians as part of its preparations against Turkey's offensive.

Yet, the footage circulating on several media outlets was announced to have no links with the joint ground patrol, the Defense Ministry said later.

Thomas W. Bergeson held a meeting with the General Staff at its headquarters yesterday on the planned safe zone to be established in Syria.

The Defense Ministry further announced that the talks with the military delegation will continue today at the joint operations center in the Akcakale district of the southeastern Şanlıurfa province.

Speaking on Turkish officials' previous statements on an imminent military offensive east of Euphrates, Çavuşoğlu said that all preparations for an intervention were ready and that another Manbij process, marked by delays, was out of the question.

Turkey's suspicion of the U.S. is not only the result of the country's ongoing support of the YPG but also prior experiences in other deals that led to major disappointment in Ankara.

Before the safe zone deal, Turkey and the U.S. agreed on a road map in June 2018 foreseeing the withdrawal of the YPG from Manbij and installing joint Turkish-American patrols, which began last November. However, the process has been sluggish as the terrorist group was still present in the city despite the three-month timetable set to implement the deal.

Therefore, even though the developments in military terms are positive, the whole process has been less than satisfactory as U.S. officials make no statements concerning the return of Syrians and no definite decisions as to the technical details of the safe zone being established.

On Aug. 7, Turkish and U.S. military officials agreed to set up a safe zone and develop a peace corridor running from the Euphrates River to the Iraqi border to facilitate the return of displaced Syrians currently living in Turkey to their home country and provide security for Turkish border settlements and military outposts. They also agreed to establish a joint operations center. This center went into operation on Aug. 12 in southeastern Şanlıurfa's Akçakale district and two days later, drone flights for reconnaissance purposes took place. As of Aug. 21, the first stage of the safe zone began, and joint air surveillance activities were conducted.