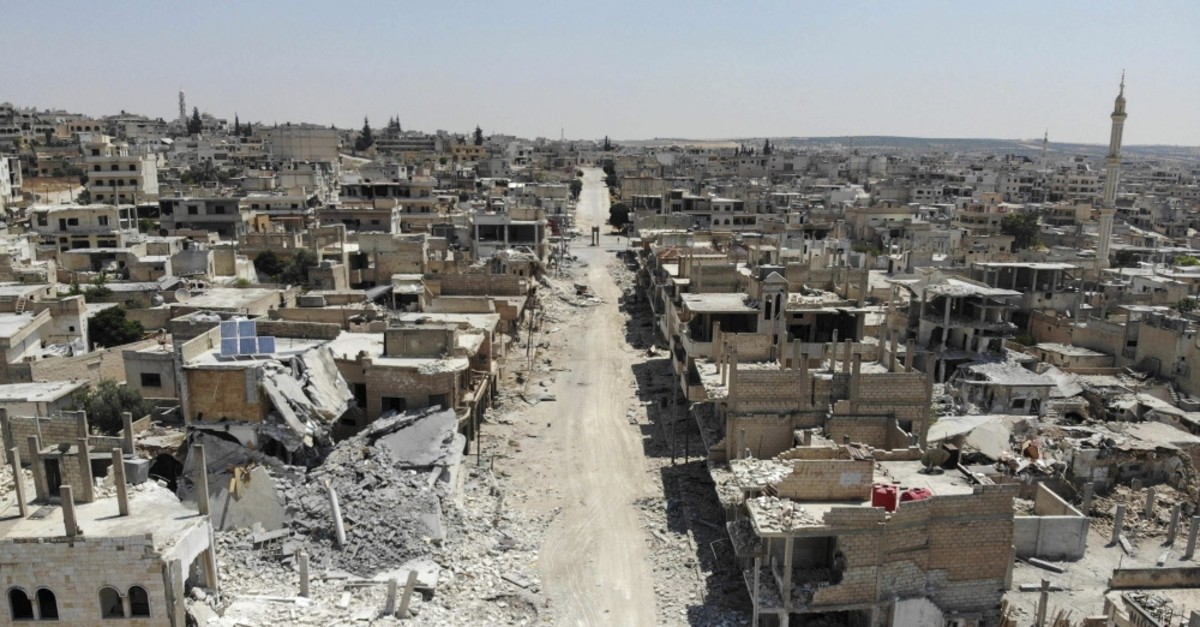 Violence in Idlib needs to end as it may force a humanitarian crisis at levels never before seen in the Syrian civil war, Ankara says

Turkey called for an urgent cease-fire in northwestern Syria's Idlib on Thursday, warning that if attacks continue the outcome would be even worse than previous catastrophes in the war-torn country.

Speaking at the 42nd session of the Human Rights Council of the U.N. in Switzerland, Permanent Representative of Turkey to the U.N. at the Geneva office Sadık Arslan expressed the country's concerns over escalating violence in the region. "We [as Turkey], have done our best to prevent the regime and its supporters' attacks against civilians and infrastructure in Idlib, even by risking the lives of our own soldiers."

If these attacks do not stop immediately, the outcome of the tragedy will be much heavier than what happened back in 2015," Arslan highlighted.

He further addressed the EU to share the burden of 3.6 million Syrian refugees that Turkey has been hosting for almost eight years now.

Idlib, home to 1.5 million people, is the last opposition enclave in Syria. Last year, President Recep Tayyip Erdoğan and his Russian counterpart Vladimir Putin reached an agreement in Sochi on Sept. 17. According to the agreement, the cease-fire in the Idlib region was to be preserved with the withdrawal of heavy arms and radicals from the region. The meeting in Sochi was part of the Astana process, the of which was held in Turkey in January 2017 to bring all warring parties in the Syrian conflict to the table to facilitate U.N.-sponsored peace talks in Geneva. Ankara often warns the international community and regional countries that a new offensive could trigger a fresh refugee wave toward the West.

Despite the risks of great refugee flows and a humanitarian crisis in general, the regime and its backers continue to terrorize the region as Russian airstrikes killed an elderly man overnight, the first such casualty since Moscow declared a cease-fire in the region on Aug. 31, a war monitor said. The truce, which brought a halt to four months of devastating bombardment by the regime and its ally Russia on Idlib province, had held for a short while despite persistent skirmishes on the ground. Yet, on Tuesday, Russia carried out its first airstrikes in the area since the cease-fire began, according to the Syrian Observatory for Human Rights.

The bombardment continued until dawn on Wednesday in the village of Al-Daher where a 75-year-old man was killed, the Britain-based Observatory said, adding that the air raids had since stopped.

The victim, Ahmad Issa al-Moussa, had been displaced to Idlib from Syria's Aleppo province several years ago, an Agence France-Presse (AFP) correspondent reported.

"We were asleep... when we heard the sound of a missile falling 50 meters away," expressed Abu Anas, the victim's son. The 31-year-old man said his father was slow to evacuate their home because he was having walking difficulties. According to his son, al-Moussa died when a second airstrike hit 2 meters away.

The truce was the second such agreement between the Bashar Assad regime and opposition groups since Aug. 1, which collapsed after just a few days.

The number of people who have been displaced since Sept. 17, 2018, when the Sochi deal was signed, has reached 1,042,000 since then, with most moving toward the Turkish border. Since Feb. 2, when the attacks gained momentum, a total of 13 tent cities, 30 civil defense centers, 67 health facilities, 114 schools, 18 bazaars, two water power plants, three electric power plants and 16 bakeries have been the target of the attacks.

Addressing the issue, Mohammed Hallac, president of the Syria Intervention Coordinators, said that as winter comes the region will witness yet another catastrophe as most of the people in the area are without shelter. He also expressed that if the attacks continue, the number of displaced civilians will reach 1.5 million, Anadolu Agency (AA) reported.

"We have escaped from the bombardments and airstrikes. Our house collapsed on us. My husband has been killed. I had a son who was working and taking care of us. He was killed as well," Alma Zeydi, a displaced woman, said yesterday.

Another civilian Mezne Haye explained the inhumane conditions they are trying to live in.

"The inside of the tent is very hot. Its roof is nylon. Tomorrow, winter will come and we will be in need of canvas. We need everything," she said.