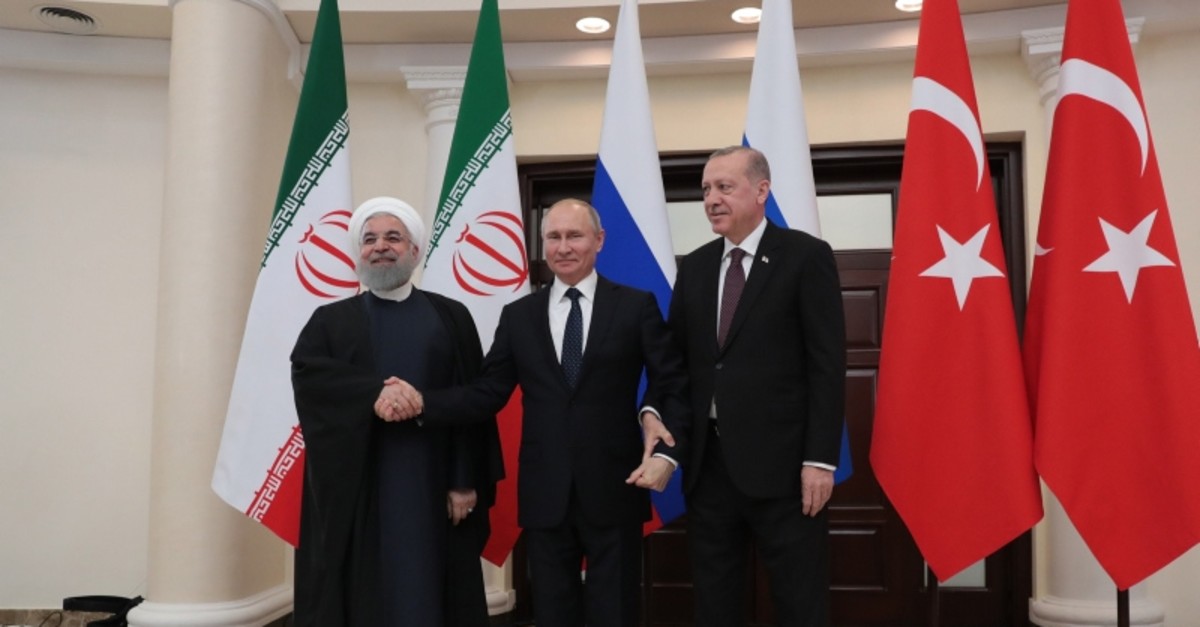 The trilateral meeting with Iran and Russia that will be held in Ankara next week will focus on the developments in Syria's Idlib, President Recep Tayyip Erdoğan said Friday.

Erdoğan said he would discuss recent developments in Idlib, Syria — about 400 kilometers (250 miles) from Diyarbakır, across Turkey's southern border — at the summit.

"This summit is a process. It started in Sochi and continued in Ankara. And later we continued it in Tehran," Erdoğan said.

"We will continue to discuss developments in Idlib, including observation posts and the fight against terror organizations," he said.

While the first meeting of the Astana process was in Turkey in January 2017 to facilitate U.N.-sponsored peace talks in Geneva, officials from the three countries most recently met in the newly renamed Kazakh capital Nur-Sultan in April for the 12th round.

During the previous rounds of Astana talks, the three countries agreed on several topics and implemented them. They decided to strengthen the mechanism established to ensure monitoring of the implementation of the ceasefire in Syria and to create tension zones where the conflict is most intense between the opposition and regime forces. Also, with a project prepared by a working group formed under the Astana trio and the U.N. to investigate the fate of missing people and the release of those who have been detained, several detainee swap deals have been carried out.

Regarding the operations on the establishment of a safe zone east of Euphrates, Erdoğan said Turkish and U.S. helicopters are carrying out joint logistical air operations. He continued by noting that the U.S. has not met Turkey's expectations regarding its attitude toward the PKK's Syrian offshoot, the People's Protection Units (YPG).

"We attach great importance to the U.S.'s attitude towards the YPG terror group. We haven't seen the attitude we want yet," Erdoğan told reporters.

Erdoğan said that he would discuss the issue with U.S. President Donald Trump at the U.N. General Assembly in New York later this month.

On Sept. 12, two Turkish helicopters and two U.S. choppers took off from Akçakale in Şanlıurfa, southeastern Turkey, where the two countries' armed forces have a joint operations center from where they flew to the Syrian side of the border.

Under the deal, opposition groups in Idlib would remain in areas where they were already present, while Russia and Turkey would carry out joint patrols in the area to prevent a resumption of fighting.

Erdoğan on Friday reiterated the country's resolute stance against terrorism in the wake of a PKK terrorist attack targeting a vehicle carrying civilian workers Thursday in the southeastern Diyarbakır province which killed seven people and injured 10 others.

"No matter what happens, we will undauntedly continue our struggle. I believe that Turkey will eventually emerge victorious from this ordeal with its military, police, gendarmerie and security forces," said Erdoğan.

Voicing support for the many mothers in Diyarbakır staging sit-in protests against the terrorist PKK abducting and trying to recruit their children, he said the number of protesters may swell to the thousands.

Addressing the protesting mothers, Erdoğan stressed that the government would stand by them and closely follow the issue.

Some 28 families are staging a demonstration in the southeastern province of Diyarbakır, claiming that the Peoples' Democratic Party (HDP) forcibly recruited their sons to the terrorist PKK.

The Turkish government has charged the HDP with having numerous links and providing support to the terrorist PKK.

In its more than 30-year terror campaign against Turkey, the PKK -- listed as a terrorist organization by Turkey, the U.S., and the EU -- has been responsible for the deaths of some 40,000 people, including women, children, and infants.