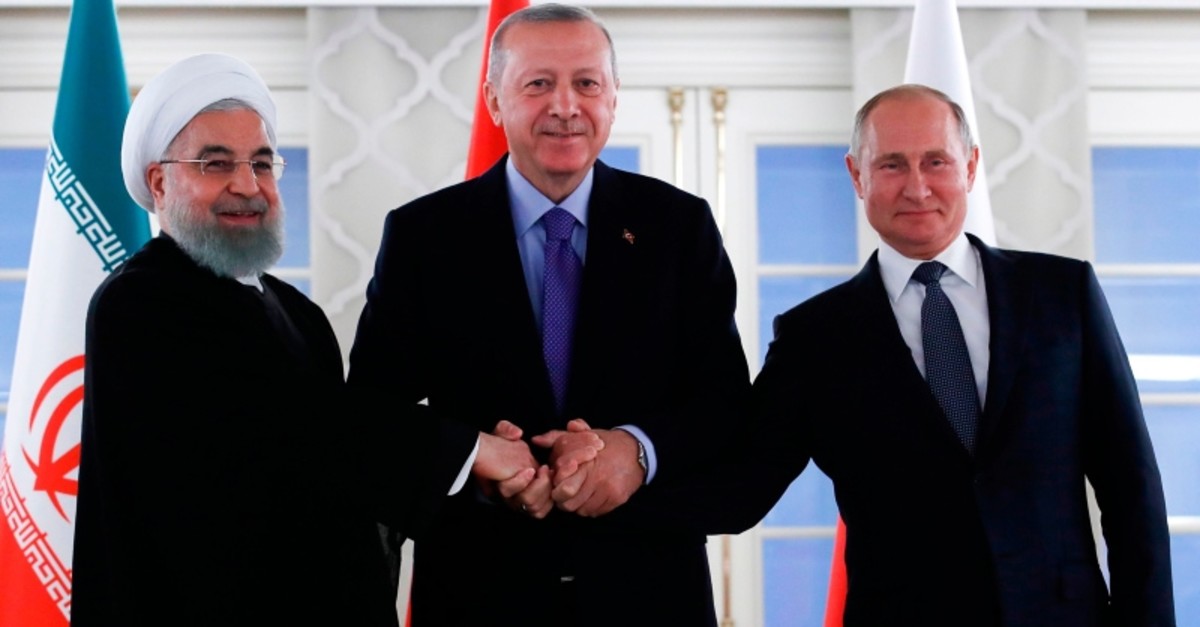 A trilateral summit in Ankara between Turkey, Russia, and Iran — the fifth such meeting under the scope of the Astana talks — laid the foundation for a permanent solution in Syria by forming a constitutional committee, however all parties agreed there were still obstacles to reaching peace in the war-torn country, namely terrorist groups such as the YPG/PYD/PKK.

"The PKK, and its extensions the People's Protection Units (YPG) and the Democratic Union Party (PYD), are the biggest threat to Syria's future. As long as the PKK presence in the country continues, neither Syria nor our region can find peace," Erdoğan told a news conference after the summit with Russian counterpart Vladimir Putin and Iranian President Hassan Rouhani.

He said Ankara, Moscow, and Tehran stressed that supporting terrorists under the pretext of fighting Daesh was "unacceptable" — referring to U.S. support for the YPG/PYD, which it has rationalized using that pretext.

Erdoğan reasserted that Turkey cannot allow a terror corridor along its border with Syria, referring to the YPG/PYD presence there.

He added that Turkey's main aim is to ensure a "peace corridor" in northern Syria.

Commenting on the Astana process, Erdoğan said it was a "unique attempt" and "the sole initiative" to find effective and concrete solutions for Syria.

"The Astana platform is the only initiative that is able to take concrete steps in Syria," the president expressed, adding that he believes that the trilateral summit in Ankara will bring a new dimension to the Astana process.

Still, the president highlighted that they all have to take "more responsibility" to ensure peace in Syria.

"The trilateral summit on Syria in the Astana format is the most effective mechanism to contribute to a resolution process in Syria," Russian President Vladimir Putin said, agreeing with Erdoğan.

"Stability has been reached, the level of violence has reduced in Syria through our joint efforts," he added.

The Astana peace process — seeking to end the Syrian conflict once and for all — was launched in January 2017 upon the initiatives of Turkey, Russia, and Iran. To date a total of 13 rounds have been held in Astana, Kazakhstan.

Expressing hope that the three-way talks would help to bring 'final' settlement in the Syrian crisis, Putin said: "I would like to express a confidence that our talks will be productive and the agreements reached will form a ground for final resolution of the crisis in Syria, restore peace and security in this country, strengthen its sovereignty."

"We must take supplementary measures to completely destroy the terrorist menace that comes from the zone of Idlib," he added.

Meanwhile Iranian President Rouhani underscored that diplomacy, not a military approach, was the solution to end the crisis.

"We need to pave the ground for a return of security to Syria ... diplomacy and not confrontation can secure peace in Syria ... The immediate withdrawal of American troops is necessary for establishing peace in Syria," said Rouhani.

Speaking of Turkey's efforts for the Syrian people since the beginning of the war in 2011, Erdoğan said that the country has never backed down on any compromises when it comes to the Syrians.

"In the last eight years, as Turkey, we have made and are still making many compromises. Today, the returned refugees continue their life in their territories, going to schools. It is clear that Turkey cannot handle the refugee burden by itself. Now, we have to focus on the return of the refugees," the president said.

Ankara has spent nearly $40 billion so far, while it has only received about 6 billion euros of support from the international community. Despite some factions in Turkey becoming restive due to a record number of refugees in various cities and the large amount of money spent on them amid deteriorating economic conditions in the country, the government insists on keeping its open-door policy along with maximum support for refugees.

"Our country has been there for the Syrian people at their hardest times. We have been hosting millions of Syrians in our country," he said, adding that thanks to the operations Turkey conducted in northern Syria, 360,000 Syrians were able to move back to liberated areas.

Turkey carried out two cross-border operations west of the Euphrates River, Operation Euphrates Shield launched in August 2016 and Operation Olive Branch in January 2018, to drive terrorist groups, including the People's Protection Units (YPG) and Daesh, from its borders.

This time, Turkey aims to drain the terror swamp near its border, protect Syria's territorial integrity and ensure political stability with a possible operation east of the Euphrates River to eliminate YPG terrorists.

Erdoğan said through the Sochi deal signed with Russia last year, a humanitarian catastrophe was prevented in the northwestern province of Idlib at the time. However, the province, which is the last opposition-held enclave of the war-torn country, has been suffering from constant regime attacks since April despite the Sochi deal.

"The escalating violence in Idlib was one of the main points in today's talks. The number of civilians killed since April unfortunately has reached 1,000. People had to hit the roads and escape from the region once again," the president said, adding that concrete steps must be taken to bring peace to the region.

"Idlib should not be a safe net for terrorists," Putin underlined, while Rouhani said that "the application of the Sochi deal did not work as planned."

Putin described the situation in Idlib as "concerning."

Turkey and Russia agreed last September to turn Idlib into a de-escalation zone, where acts of aggression are expressly prohibited.

The zone is currently inhabited by about 4 million civilians, including hundreds of thousands of people displaced from cities and towns throughout the war-weary country.

When it comes to the YPG itself, Erdoğan said that this issue has a critical importance for both Syria's political integrity and Turkey's national security. "Today, the Daesh threat in Syria has been removed. The terror group that now poses a threat is the YPG," the president said.

"The terrorists [PKK's Syrian affiliate YPG] once again showed their 'brutal face' by targeting a hospital in a Syrian town on Sunday," the president added, on the importance of the formation of a safe zone in northern Syria.

Expressing that he informed both Putin and Rouhani on the safe zone in Syria, Erdoğan reiterated once again the importance of the plan.

"I've told them that we can have refugee cities there and I've urged them for preparations for settlements in the region. Our ultimate aim is to establish a peace corridor in northern Syria and prevent the country from division," Erdoğan said.

Putin further emphasized that security problems in northeastern Syria should be solved on the basis of protecting Syria's territorial integrity.

Turkish military has recently increased its deployment near the Syrian border, including heavy weaponry, armored vehicles and tanks, as it prepares for an imminent offensive against the YPG.

Turkey reiterated its determination to eliminate all terrorist entities east of the Euphrates amid ongoing talks with the U.S. to establish a safe zone in northern Syrian territories.

Announcing that an initiative has been launched to form an international conference over the return of the Syrians, Erdoğan said that he believes that at least 2 million refugees from Turkey might be resettled in these safe zones. "This means that we can ensure, for a majority of Syrian refugees, to be able to continue their lives in a safe place without being a burden on anyone. We want to work on the voluntary return of Syrian refugees."

On Aug. 7, Turkish and U.S. military officials agreed to set up a safe zone and develop a peace corridor running from the Euphrates River to the Iraqi border to facilitate the return of displaced Syrians currently living in Turkey and provide security for Turkish border settlements and military outposts. They also agreed to establish a joint operations center. The agreement envisages the setting up of measures necessary to address Turkey's security concerns.

By establishing the safe zone in northern Syria, Turkey hopes to resettle displaced Syrians and clear out the PKK and YPG elements currently present in the region.

Regarding the U.S.' partnership on the issue, Erdoğan highlighted that if the NATO ally fails to fulfill Turkey's expectations over the safe zone, than the country will take the initiative itself to provide peace in the region.

Touching upon the U.S.' presence in Syria, Rouhani said that the presence was not legitimate and U.S. forces must leave the region as soon as possible.

"[U.S. President Donald] Trump said last year that U.S. troops will pull out of Syria but the outcome of this promise has been like his other promises. It is essential that U.S. troops leave the region at once and the Syrian government establishes sovereignty in the east, north of the Euphrates," the Iranian president said.

Stating that the U.S. aims to divide Syria, Rouhani said that there are terrorist groups backed by the U.S. in U.S.-controlled areas.

"There are terrorists east of the Euphrates River in Syria, and the area is controlled by the U.S.," he added.

"Foreign powers will leave the region one day eventually. However we, as regional neighbors have always been here and will continue to be here," Rouhani further highlighted.

"The application of the Adana agreement might be what could eliminate the concerns of both sides," he indicated.

The Adana agreement was signed between Turkey and Syria in October 1998, which clearly stated that Syria would not allow any PKK activities within its borders and would block any terror activities that would threaten Turkey's sovereignty.

"Another point was the constitutional committee. We have shown a constructive and effective process on the issue today," Erdoğan further said regarding the meeting.

Putin said on the issue that the constitutional committee list was approved and it will contribute to the implementation of peace and stability.