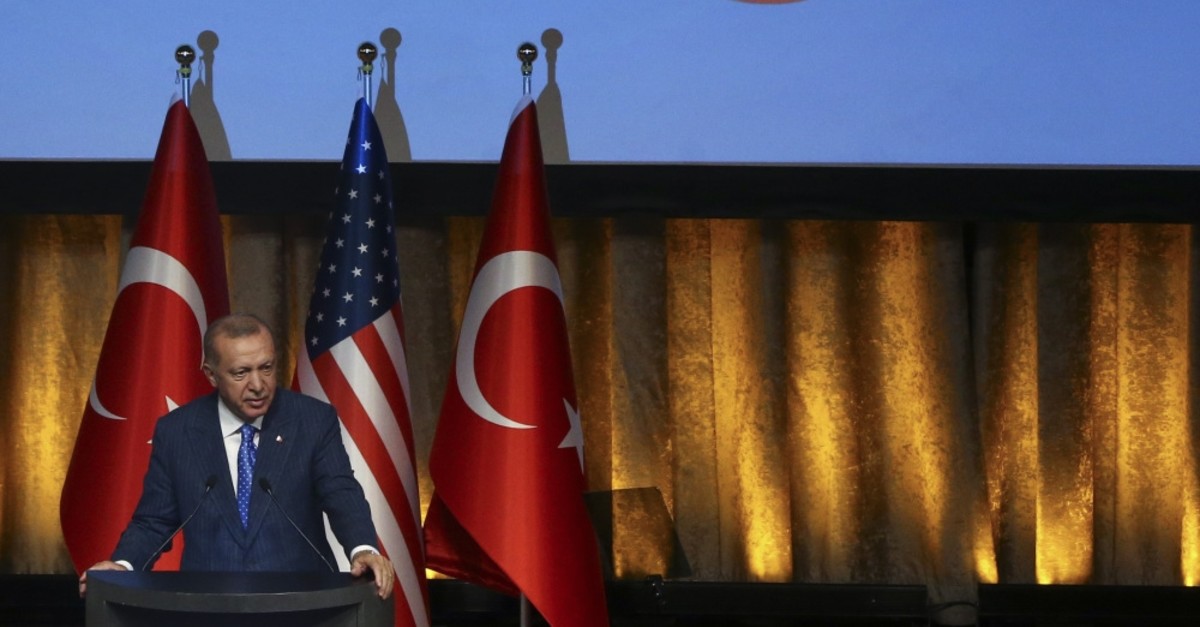 Erdou011fan speaks at an event organized by the Turkish American National Steering Committee (TASC) and the Presidency for Turks Abroad and Related Communities (YTB) in New York, where he is due to join the U.N. General Assembly, Sept. 23, 2019.
by Daily Sabah with AA Sep 24, 2019 12:11 am

Erdoğan is expected to address international peace and security issues, focusing on regional developments including the situation in Syria

PresIdent Recep Tayyip Erdoğan will speak today at the 74th session of the U.N. General Assembly in New York. In his speech at the General Assembly, Erdoğan is expected to discuss many topics including regional developments focusing particularly Syria, as well as Yemen, Iran and Palestine. The refugee crisis stemming from the civil war in Syria is another important issue expected to be highlighted by Erdoğan.

Recently, a trilateral summit in Ankara between Turkey, Russia and Iran – the fifth such meeting under the scope of the Astana talks – laid the foundation for a permanent solution in Syria by forming a constitutional committee.

The Astana peace process – seeking to end the Syrian conflict once and for all – was launched in January 2017 upon the initiatives of Turkey, Russia and Iran. To date a total of 13 rounds have been held in Astana, now Nur-Sultan, Kazakhstan. Turkey has opened its doors to nearly 3.6 million Syrian refugees, hosting the largest Syrian community in the world.

On the sidelines of the General Assembly, Erdoğan has a tight schedule of bilateral meetings with world leaders. Erdoğan's most important bilateral meeting is expected to be held with his U.S. counterpart Donald Trump. In addition to the planned safe zone, the two leaders' agenda covers a wide range of issues including the situation in Idlib and east of the Euphrates, cooperation against terrorism and other regional developments.

Yesterday, Erdoğan was scheduled to hold bilateral meetings with German Chancellor Angela Merkel and Pakistani Prime Minister Imran Khan after the U.N. Climate Summit. In the Erdoğan-Merkel meeting, the agenda included the refugee crisis due to the Syrian civil war, Turkey-EU relations, and bilateral relations. In the meeting with Khan, the two leaders were expected to discuss bilateral relations and the Kashmir issue.

Erdoğan is also scheduled to meet with French President Emmanuel Macron and British Prime Minister Boris Johnson today following his meeting with U.N. Secretary-General Antonio Guterres and a lunch reception. During the evening in New York, Erdoğan will attend the dinner reception organized by U.S. President Donald Trump in honor of delegation heads in the U.N. General Assembly.

On Sunday, President Recep Tayyip Erdoğan spoke at an event organized by the Turkish American National Steering Committee (TASC) and the Presidency for Turks Abroad and Related Communities (YTB) in New York.

In his speech at the event, Erdoğan vowed to unveil the true face of the Gülenist Terror Group (FETÖ), the group behind 2016 defeated coup in Turkey.

The president said FETÖ abused Turkish people for 40 years, touting education and financial favors, and built a criminal network operating in 150 countries across the world.

"The biggest feature of FETÖ is that it has no sacred value, [it has a] principle to abuse. [Telling] lies, slander [and] hypocrisy are their characteristics," said Erdoğan. "Together with you, we will reveal to the entire world this terror group, which martyred 251 people on the night of July 15."

"Until all coup plotters are brought to justice, we will not quit going after them," added the president.

FETÖ and its U.S.-based head Fetullah Gülen orchestrated the defeated coup on July 15, 2016, which left 251 people dead and nearly 2,200 injured. FETÖ was also behind a long-running campaign to overthrow the state through the infiltration of Turkish institutions, particularly the military, police and judiciary.

An unknown number of Gülenists, mostly high-ranking figures, fled Turkey when the coup attempt was thwarted. A large number of Gülenists had already left the country prior to the coup attempt after Turkish prosecutors launched investigations into other crimes of the terrorist group. Despite Turkey's extradition requests and bilateral legal agreements, many FETÖ members still enjoy their lives in different countries around the world.

Gülen, who arrived in the United States in 1999, currently lives in a luxurious retreat in Saylorsburg, Pennsylvania. He never leaves the well-guarded compound but often gives interviews to foreign media. Ankara formally requested Gülen's extradition on July 19, 2016 and has been pressing the U.S. ever since, sending hundreds of folders of evidence implicating Gülen and FETÖ in the coup attempt.

The issue has been raised in bilateral meetings between Turkish and American officials in phone calls, letters and other exchanges. Erdoğan said Turkey is taking necessary steps for the extradition of Gülen and to halt all its operations in the U.S.

Later, the president told reporters that pro-FETÖ figures in the U.S. have been making efforts to harm Ankara-Washington relations and cause unrest among Muslims.

Looking at FETÖ in the U.S., it is still very active in many different fields in many states with its hidden agenda. FETÖ operates over 173 charter schools that enroll over 85,000 students in 26 states. FETÖ has some 312 educational facilities in the U.S. and receives almost $600 million per year for these schools. In his remarks, Erdoğan also said Turkey will also continue to back the Palestinian cause, saying the issue is a "red line" for them. "No power or threat can prevent us from protecting the law of Palestine," said Erdoğan.

"The Jerusalem cause is not only the cause of a handful of Muslims in Palestine, but the dignity of the 1.7 billion people in the Islamic world," he added.

Morsi died of a sudden heart attack in June while he was in court. He was ousted in a military coup in 2013.

Khashoggi, a U.S. resident and contributor to The Washington Post, was killed and dismembered by a group of Saudi operatives shortly after he entered the consulate in Istanbul on Oct. 2.

Speaking about terror groups, the Turkish president said that besides harming Muslims, groups such as al-Qaida, Boko Haram, al-Shabab and FETÖ provide enemies of Islam ground for abuse.

Leaders of the U.S. Muslim community in New York applauded President Recep Tayyip Erdoğan on Sunday for his active role in the Muslim world. "We need a centralized leadership," said Siraj Wahhaj, an African-American imam of Al-Taqwa mosque in Brooklyn, New York. Pointing to the leadership of Erdoğan, Wahhaj said, "I have a feeling that the leadership is coming from Turkey."

"You give us a sense of pride, an honor to meet a president and a leader and… a wonderful human-being with patience, love, worries and cares for Muslim ummah," Jamal said.