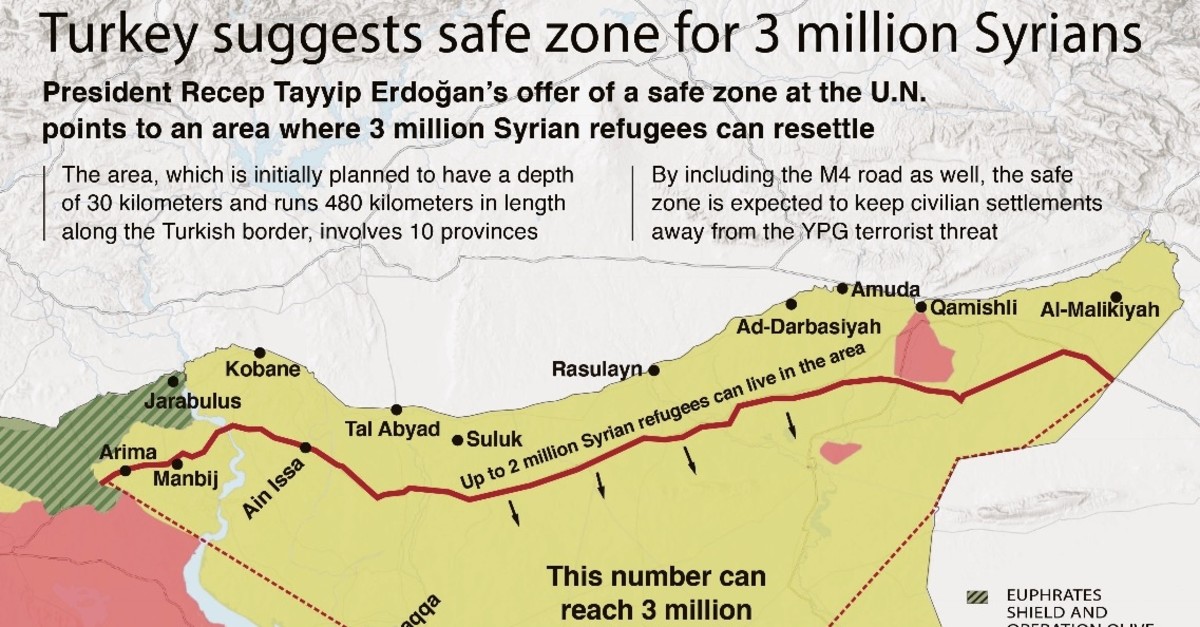 Idlib may be the scene of a new refugee influx that could hurt Turkey the most, Ankara told the U.N. as it warned the international community of serious possible outcomes for the Western world

Ankara called on the European Union and the United Nations to fulfill the promises they made to Turkey regarding Syrian refugees during a high-level meeting on Syria within the scope of the 74th session of the United Nations General Assembly in New York City, warning of a new refugee flow from the northwest region of the country.

Stating that the Brussels Conference on the humanitarian crisis in Syria, co-chaired by the EU and the U.N., was organized in March, Foreign Minister Mevlüt Çavuşoğlu pointed out that the situation of the Syrians had become worse since then.

"A tragedy is taking place in front of our eyes [in Idlib]. If this humanitarian crisis worsens, Turkey will be the most affected country. We already exceeded our capacity by taking in 4 million Syrians. Now, 300,000 Idlib refugees are at our doors," the diplomat said. Çavuşoğlu underlined that the population of Idlib is nearly as much as the Syrian population in Turkey and that the country will not be able to undertake a new refugee wave. Signaling that the International Refugee Forum to be organized in Geneva in December will be a good opportunity in terms of aid for refugees, Çavuşoğlu reiterated that aiding Syrians is a moral responsibility and that Turkey thus awaited a stronger, more solid and sustainable support.

Despite eight months of calm provided by the Sochi deal between Turkey and Russia last September, the regime, backed by Moscow, intensified its attacks starting April 26 under the pretext of fighting Hayat Tahrir al-Sham (HTS) terrorists holed up in Idlib. Since then, the situation has gotten even worse, taking the lives of innumerable civilians. Residential areas have been destroyed by indiscriminate attacks, while numerous educational facilities, health facilities and residential areas have collapsed or have become unusable after being targeted by bombs. While clashes are ongoing in southern towns, it is expected that people will flock to the Turkish border in case attacks move toward northern parts of Idlib.

Turkey has spent $40 billion for Syrians so far

Ankara has spent nearly $40 billion so far for the refugees, while "the promises made to Turkey lagged far behind the spending Turkey has made," Çavuşoğlu explained.

Ankara and Brussels signed an agreement in 2016 to find a solution to the influx of refugees heading to the union. According to the deal, Turkey was promised a total of 6 billion euros ($6.6 billion) in financial aid, which was initially designed to be given to the country in two stages to be used by the Turkish government to finance projects for Syrian refugees.

Visa-free travel for Turkish citizens was also promised in the agreement. Lastly, the customs union was also to be updated in accordance with the deal. In exchange for these promises, Turkey took the responsibility of discouraging irregular migration through the Aegean Sea by taking stricter measures against human traffickers and improving the conditions of the approximately 4 million Syrians living in Turkey. Although the first stage of the funding was provided to Turkey, based on the commission's progress report on migration, the EU failed to provide the rest of the funding and did not fulfill its other promises within the given time frames. Likewise, negotiations for updating the customs union have yet to start, despite the deal stating they must be done by the end of 2016.

On the other side, the issue of the constitutional committee was also mentioned. Indicating that financial support is significant however that there are also other problems on the table, the foreign minister stated "We announce with pleasure that we have finished the establishment process of the Syrian Constitutional Committee. This is the most essential step toward a political solution. This success stems from the collective efforts of the Astana guarantors," adding that while accelerating the political solution, security conditions and civilian infrastructure have to be provided in order for refugees to be willing to return to their country. The Astana peace process, seeking to end the Syrian conflict once and for all, was launched in January 2017 upon the initiatives of Turkey, Russia and Iran. At a summit on Syria with Russian and Iran hosted by Turkey earlier this month, President Recep Tayyip Erdoğan said the participants would urge the constitutional committee to begin work as soon as possible. Regarding the issue, the U.N. envoy for Syria also said on Tuesday the agreement to establish a constitutional committee is an important first step and "a door opener" to eventual U.N.-supervised elections and a new future for Syria.

However, before this can be achieved, "we must build up what is still almost totally lacking in Syria, and that is a sense of trust and confidence, between Syrians, and between Syria and the outside world," Ger Pedersen said. Pedersen spoke a day after Secretary-General Antonio Guterres announced that the Syrian regime and opposition had reached agreement on a long-awaited, U.N.-facilitated constitutional committee. Pedersen said he shook hands after agreement was reached with Syrian Foreign Minister Walid al-Moallem in Damascus and then called opposition leader Nasser Hariri who was in New York. The U.N. envoy said Guterres looks forward to meeting them both in New York in the coming days and Pedersen will then begin discussions with them on the launch and initial work of the committee.

"So far, more than 360,000 Syrians returned from Turkey to areas which have been secured thanks to Turkey's successful military operations. This indicates that Syrians are willing to return provided that the necessary conditions have been provided," Çavuşoğlu said. Turkey carried out two cross-border operations west of the Euphrates River, Operation Euphrates Shield launched in August 2016 and Operation Olive Branch in January 2018, to drive terrorist groups, including the People's Protection Units (YPG) and Daesh, from its borders.

Çavuşoğlu further mentioned that Turkey plans on organizing an international refugee conference on the return of Syrians together with Jordan, Lebanon and Iraq. Adding that Turkey would like to see particularly EU countries and other countries at the conference, he underlined that cooperation on the matter is vital since the crisis has not ended yet, but rather evolved toward another direction.

"Most of the U.N. humanitarian aid is made through our country. This makes up 31% of the total aid the U.N. provides for Syria," Çavuşoğlu indicated, stressing that Turkey is at the same time the main corridor for aid toward Syria.

It is also reported yesterday that Guterres will visit the Turkish metropolis of Istanbul next month to attend a mediation conference.

Guterres will attend the Istanbul Mediation Conference on Oct. 31, according to information obtained by an Anadolu Agency (AA) correspondent.

Istanbul conferences on mediation bring together experts and enable a significant platform for the exchange of knowledge and practice in mediation. The first conference was organized in 2012.