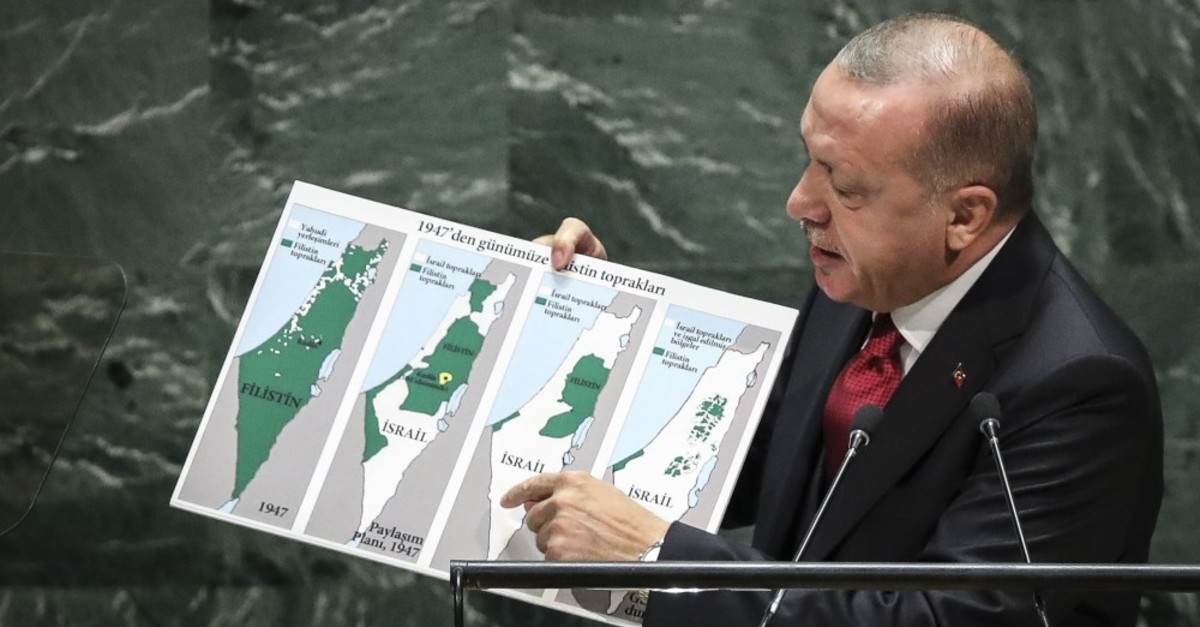 President Recep Tayyip Erdou011fan holds up a map of Palestine since 1947 showing changing population and territory under Israeli rule while speaking at U.N. headquarters in New York, Sept. 24, 2019
by Daily Sabah Sep 26, 2019 12:10 am

Yet another passionate speech made by President Recep Tayyip Erdoğan at the U.N. General Assembly calling on international actors and organizations to take concrete steps in the Palestine-Israel conflict received widespread applause from world leaders and on social media.

Delivering a speech at the 74th General Assembly of the United Nations in New York on Tuesday, Erdoğan reiterated the highest-level support for a two-state solution based on 1967 borders between Palestine and Israel, criticizing the aggressive policy of Tel Aviv against the Palestinian people. "Where are the borders of the State of Israel? Is it the 1948 borders, the 1967 borders, or is there any other border?" Erdoğan asked the leaders of the member states, adding that Israel's seizure of Palestinian territories is not legitimate.

Hamas political bureau chief Khaled Mashal sent a letter to Erdoğan, thanking Erdoğan for bringing the issue to the U.N. agenda. Mashal added that the Turkish President made his speech on behalf of all persecuted Muslims in the world.

Senegalese President Macky Sall also called on Israel to respect the borders of the Palestinian state determined by the international community during his speech on the general assembly. The Arab-Israeli War, also known as the Six-Day War, resulted in Israel's occupation of the West Bank, East Jerusalem, Gaza and the Syrian Golan Heights, triggering the displacement of hundreds of thousands of Palestinians and Syrians. Erdoğan noted that the global community and the U.N. should take concrete action to support the Palestinian people "beyond mere promises."

"How can the Golan Heights and the West Bank settlements be seized, just like other occupied Palestinian territories, before the eyes of the world if they are not within the borders of this state?" he asked and questioned the motive behind the "deal of the century" for aiming to eliminate the state and people of Palestine.

Ankara to stand by Palestinians

"Turkey will continue to stand by the oppressed people of Palestine as it has always done so until today," the president said. The president's remarks also caused outrage in Israel as Israeli Prime Minister Benjamin Netanyahu said on Twitter in a video answering Erdoğan's remarks, accusing him of being a "liar" instead of acknowledging his rightful points.

"Yet again, Benjamin Netanyahu, neck-deep in corruption charges, attempts to distract attention from his domestic troubles," Altun said in a message posted on his Twitter account. "Wouldn't your time be better spent preparing for your court hearing, instead of attacking a leader who can actually win an election?" he further asked.

Presidential Spokesperson İbrahim Kalın also criticized Netanyahu's statements, saying in a tweet: "PM of Israel is upset bc President Erdoğan speaks out the truth about Israeli occupation of Palestinian lands and the oppression of the Palestinian people. Mr. Netanyahu should understand that President Erdoğan, the voice of the voiceless, will continue to defend the oppressed."

Speaking yesterday, Erdoğan also said: "I went to Israel when I was prime minister. Crossing to Palestine from Israel, I was made to wait at the border for half an hour with my wife in the car. I did not understand why they made me wait. I was in Tel Aviv for an official visit… That's the approach of Israel to state leaders. They open doors for whoever they like and close doors to whoever they don't like. They are never sincere."

Erdoğan's speech at the U.N. General Assembly also received worldwide support on Twitter. Highlighting Palestine, the Syrian crisis, racism, nuclear armament, the fight against Daesh and the Cyprus issue, his remarks were welcomed by the international community.

About 200,000 tweets were sent under the hashtag #OurVoiceErdogan, while users shared quotes from the president's speech, including many from Palestine.

The two-state solution, which has been the normative approach for decades toward an ever-elusive peace agreement, was recognized in 1947 under U.N. resolution 181.

A year later, the state of Israel was established, but nearly seven decades on, Palestinians are still struggling for independence. Israel has pursued an increasingly aggressive settlement regime despite broad international condemnation, eating away at Palestinian territory and torpedoing the chances of success for a two-state reality.

Netanyahu expressed his ambition before April's election to annex Jewish settlements in the occupied West Bank if re-elected. Israel inaugurated a Jewish heritage site in east Jerusalem in late June, which saw the participation of two of President Donald Trump's top Middle East advisers, peace envoy Jason Greenblatt and Ambassador to Israel David Friedman, who signaled support for Israel's hold over parts of the city that Palestinians want for a future state.

The U.N. General Assembly passed the draft resolution with 128 countries in favor, nine against and 35 abstentions on Dec. 21, 2017, asking the U.S. to withdraw its decision to recognize Jerusalem as Israel's capital. Turkey had carried out active diplomacy for the decision before the voting.

Besides its political support, Ankara has taken many concrete actions to lend a helping hand to Palestinian people in need. In June, Ankara pledged to donate another $10 million to the U.N. Relief and Works Agency for Palestine Refugees (UNRWA). Also, state agencies took an active role in infrastructure projects. A total of 543 aid and development projects by the Turkish Cooperation and Coordination Agency (TİKA) carried out between 2005 and 2018.

TİKA first opened an office in Palestinian territories in 2005 and since then, has run 332 projects in the West Bank, 81 in east Jerusalem and 130 in the Gaza Strip. The humanitarian projects range from education and health services to water supplies and standard food packages for needy families, as well as restoration of historic sites. Lately, it has worked on opening a 180-bed, modern hospital in Gaza and recently, TİKA handed over 320 apartments to impoverished families in the region.