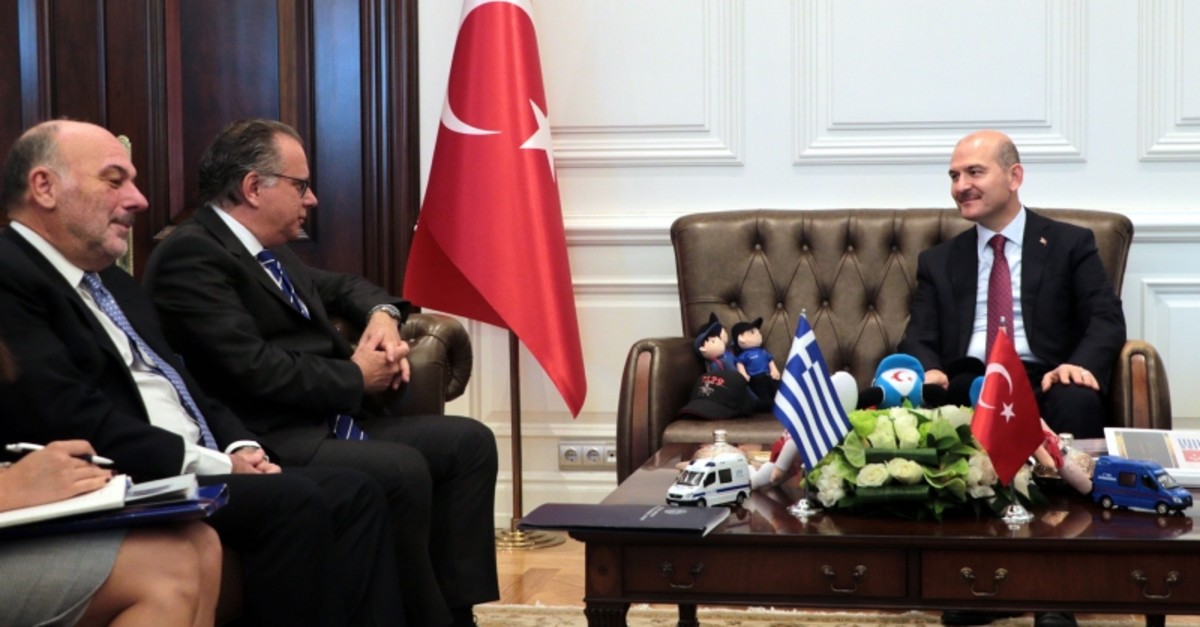 Koumoutsakos's visit came after a sharp rise in the number of migrant arrivals to Greece.

Soylu was expected to meet his German counterpart Horst Seehofer and EU Commissioner for Migration, Home Affairs and Citizenship Dimitris Avramopoulos later in the day. French Interior Minister Christophe Castaner had planned to travel to Turkey on Thursday to meet with Soylu but canceled his trip after four police officers were killed by an attacker at a police headquarters in Paris.

In 2016, German Chancellor Angela Merkel championed the Turkey-EU refugee agreement with the hope of stopping the refugee influx, after nearly a million refugees had arrived in Germany. The EU had pledged 6 billion euros ($6.6 billion) aid to improve living conditions of Syrian refugees in Turkey. But only 2.22 billion euros were disbursed by this June.

The EU member states also pledged that for every Syrian returned to Turkey from the Greek islands, another Syrian will be resettled from Turkey to the EU as part of a resettlement plan. But the pace of returns to Turkey from the Greek islands under the agreement has been slow largely due to lengthy legal processes and administrative problems in Greece.

The EU member states only accepted around 20,000 Syrian refugees from Turkey since 2016.

The deal also included visa-free travel for Turkish citizens and an updated customs union. In exchange for these promises, Turkey took the responsibility of discouraging irregular migration through the Aegean Sea by taking stricter measures against human traffickers and improving the living conditions of more than 3.6 million Syrians living in Turkey. The number of refugees and migrants going through Turkey has significantly reduced as a result.

"We have been trying to explain the issue of Afghan and African illegal migrants to Europe for a few years now. Unfortunately, they don't understand. Almost 45.5% of the migrants that reach Europe are Afghans," Soylu said. He added that the distance between countries did not provide protection. "If the Middle East is not safe, Paris is not safe, Berlin is not safe and other parts of the world are definitely not safe," he said.

Turkey has been a key transit point for irregular migrants aiming to cross into Europe to start new lives, especially those fleeing war and persecution. According to Interior Ministry figures, Turkey hosted 4.2 million refugees in 2017. The number has now reached 4.9 million, of whom 3.6 million are Syrians. Turkey is followed by Lebanon and Jordan which hosts 2.2 million and 1.2 million Syrian refugees, respectively. Germany has the highest number of Syrian refugees among Western countries with 770,000, followed by Sweden with 122,000.