Turkey's relationship with Serbia at its best level, Erdoğan says 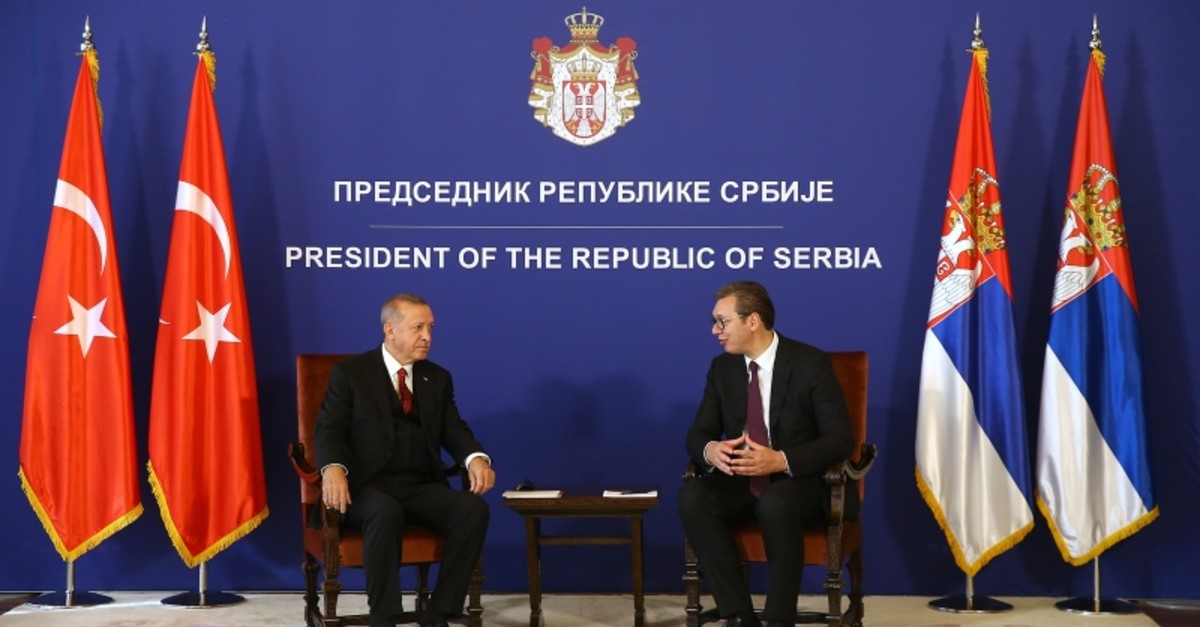 President Recep Tayyip Erdoğan on Monday said relations with Serbia were at the best level in history.

Erdoğan's remarks came before his two-day visit to Serbia where he will mark the 140th anniversary of diplomatic ties between Turkey and Serbia.

Speaking to the Serbian newspaper "Politika," Erdoğan evaluated the diplomatic relations, and economic and cultural developments between the two countries.

Turkey wants to carry out activities that will contribute to the "welfare and stability" of the Balkan region and to strengthen the relations and cooperation with the region in every field, Erdoğan said.

"Serbia has a central and strategic position in the Balkans. We have deep-rooted, historical and cultural ties with Serbia, and we see Serbia as a neighboring country, even though we do not have common borders. Today, our relationship is at its best level. My dear friend (Serbian President Aleksandar) Vucic has a great role and support in this."

Erdoğan pointed out that Turkey's investments in Serbia have risen for the last two years.

"I paid a visit to Serbia two years ago, almost on the same dates, which gave momentum to our relations. I will hold the second meeting of the High-Level Cooperation Council, which was established during that visit," Erdoğan said.

"We will have the opportunity to evaluate what we have done for the last two years and set new targets," he added.

Erdoğan said that he is proud to see that the Turkish Cooperation and Coordination Agency (TIKA) has implemented development aids in the protection of the countries' common historical and cultural heritage and development in different fields such as health and agriculture.

TIKA contributes to tourism through the restoration of Ram Fortress – a 15th century Ottoman castle – in Serbia and the historical monuments in Kalemegdan, he added.

"We also lay the foundation of the Belgrade-Sarajevo Highway, which we consider as a friendship project of great importance for the region," said Erdoğan, adding that Turkey attaches "great importance to the realization of this project."

"We see it not only as a project that will strengthen the relations but also as a friendship project that will contribute to regional peace and unite the hearts. I do not doubt that we will take our cooperation with the strong political will to the next level, and we attach great importance to the preservation of peace and stability throughout the Balkans," he said.

Turkey supports "Serbia's economic development efforts and the EU accession process," that if prosperity and peace continues in Serbia, this will have positive repercussions for the whole region, he added.

"Serbia plays a crucial role in maintaining regional peace and the development of the region. I get a chance to see this, even more, every time I visit Belgrade," Erdoğan said.

Referring to the economic development between the two countries, Erdoğan said that together with Vucic's partnership they have encouraged Turkish businessmen and investors to expand their business in Serbia.

Erdoğan pointed out that Turkish investments in Serbia have risen from only $1 million in 2011 to $200 million in 2018 and provided employment for approximately 8,000 people in the country.

"Our companies have investments in Serbia in many sectors such as textile and garment, automotive supplier industry, machinery, banking, tourism. The number of Turkish companies operating in Serbia was around 130 in 2015, and it has already exceeded 800," Erdoğan said.

Erdoğan urged the continuation of the dialogue process of Belgrade-Pristina for reaching a permanent and comprehensive agreement.

"An agreement on the Kosovo issue that satisfies all parties, is vital for the long-term stability and peace in the Balkans, of whic Turkey is also a part," he said.

Turkey supports "the attainment of a lasting and comprehensive agreement based on the free will and consensus of the parties," said Erdoğan.

He said Turkey is ready to give its best efforts to solve the issue and to find a mutual agreement between the two countries.

"Relations between Turkey and Serbia are based on mutual understanding and respect. We are conducting a multi-layered cooperation that serves the interests of our countries. Our countries have mature foreign policy traditions that can turn different perspectives into areas of cooperation," he said.

Referring to Turkey's policy for the region, Erdoğan said that the country's policy toward the Balkans is not based on religion.

"While we attach great importance to our historical and cultural ties in the Balkans, we do not carry out our policy toward the Balkans on a religious basis. Regardless of (religion), we see all the peoples of this geography as our friends that we have lived together with for centuries, and we will cooperate in every field in the future without differentiating between Serbs, Bosniaks, Albanians and Croats. We want Serbia to be in unity, solidarity and peace, to successfully complete European integration and to become a prosperous country," said Erdoğan.

Erdoğan arrived in the Serbian capital Belgrade on Monday where he met with his counterpart Vucic. Together they are taking part in the second meeting of the bilateral High-Level Cooperation Council.

The presidents will also discuss bilateral issues and sign a range of agreements.

They are also expected to attend the Turkey-Serbia Business Forum.