US Sen. Graham says Turkey needs to be protected from YPG threat in prank call 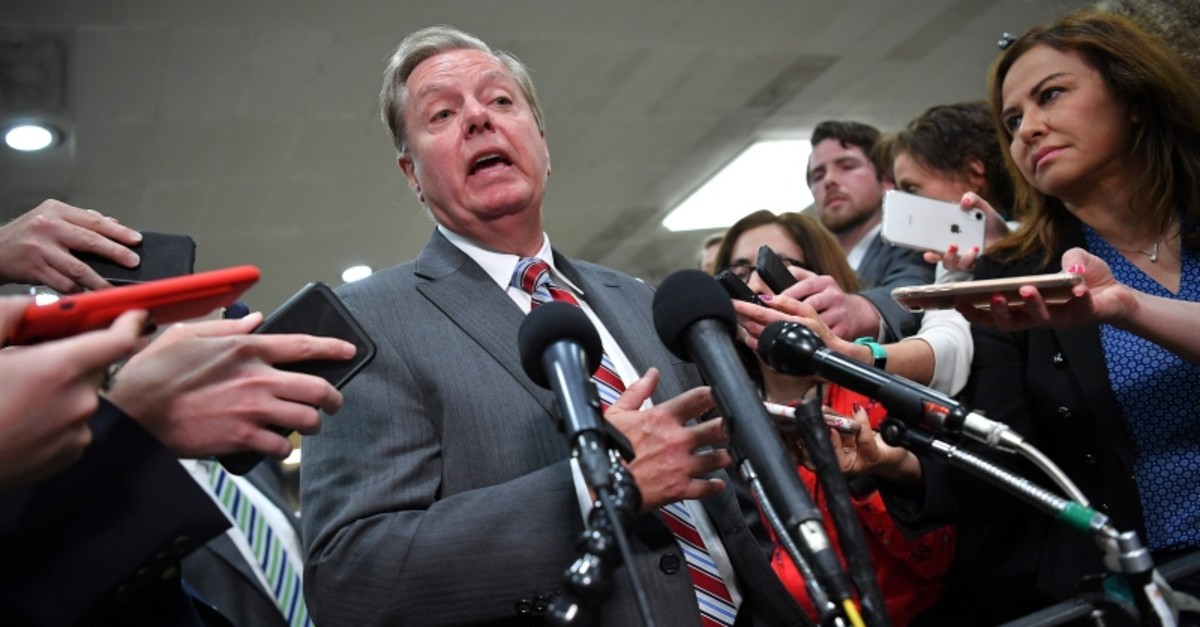 In this file photo taken on May 21, 2019, U.S. Senator from South Carolina Lindsey Graham gives a statement after closed-door briefing on Iran in the auditorium of the Capitol Visitors Center in Washington, DC. (AFP Photo)
by Daily Sabah Oct 11, 2019 12:24 am

Nothing catches you off guard quite like a prank call. U.S. Republic Senator Lindsey Graham may have revealed his true feelings to prankers about Turkey's counterterrorism efforts in an August phone call, according to Politico.

Sen. Graham thought he was on the line with Turkish Defense Minister Hulusi Akar, but listening on the other side were actually notorious Russian pranksters Alexey Stolyarov and Vladimir Kuznetsov.

"Thank you so much for calling me, Mr. Minister," Graham said when he picked up the call.

"I want to make this a win-win, if we can," he told the Akar impostor, assumingly referring to Ankara's purchase of a Russian missile system, an issue on which Graham became somewhat of a point man.

Stolyarov and Kuznetsov, who go by Lexus and Vovan, have successfully placed prank calls to a number prominent western politicians in recent years. They are suspected of ties to Russia's intelligence services.

In the call, Graham branded the PKK-linked People's Protection Units (YPG) in Syria a "threat" to Turkey, in stark contrast to his rhetoric this week.

On Wednesday, Turkey launched Operation Peace Spring, the third in a series of cross-border anti-terror operations in northern Syria targeting terrorists affiliated with Daesh and the PKK's Syrian offshoot the YPG.

Graham has been one of the most vocal senators calling for sanctions against Turkey as punishment for the operation against the YPG, with whom the U.S. has partnered purportedly in its fight against Daesh. This week, he said the U.S. was wrong to "abandon" the YPG, who he called "strong allies" in the fight against Daesh.

But just weeks ago, he expressed sympathy for the threat posed by the YPG to Turkey, to a person he thought was the Turkish defense minister.

"Your YPG Kurdish problem is a big problem," Graham said in the call, the recording of which was provided to Politico.

"I told President Trump that (Barack) Obama made a huge mistake in relying on the YPG Kurds," he continued.

"Everything I worried about has come true, and now we have to make sure Turkey is protected from this threat in Syria. I'm sympathetic to the YPG problem, and so is the president, quite frankly," Graham told the pranksters.

The phone call is not the first time Graham has expressed concerns over the YPG threat, however.

Graham told reporters at a news conference in Ankara in February that there was sufficient evidence to prove that both organizations had links, adding that former U.S. President Obama "created a nightmare" for Turkey by arming elements of the YPG that are "clearly tied to the PKK."

U.S. President Donald Trump seemed to relay Graham's sentiments in a news conference Wednesday. "If you read today — a couple of reports saying that when President Obama started this whole thing. As you know, it was started by President Obama; he created a natural war with Turkey and their longtime enemy, PKK. And they're still there," Trump told reporters.

On Sunday, hours after a phone call with Turkish President Recep Tayyip Erdoğan, Trump issued a statement that the U.S. would withdraw its troops from Syria ahead of a long-awaited counterterrorism operation by Turkey. Graham responded by warning that Turkey would face sanctions if it attacked the YPG.

The prank call apparently caught Sen. Graham in his double-dealing – dishing out sympathy to Turkey over the threats it faces, while readying threats and punishments against its NATO ally for acting in the interest of its national security.

A spokesman for Graham confirmed the call to Politico.

"We have been successful in stopping many efforts to prank Senator Graham and the office, but this one slipped through the cracks," Kevin Bishop said, adding: "They got him."