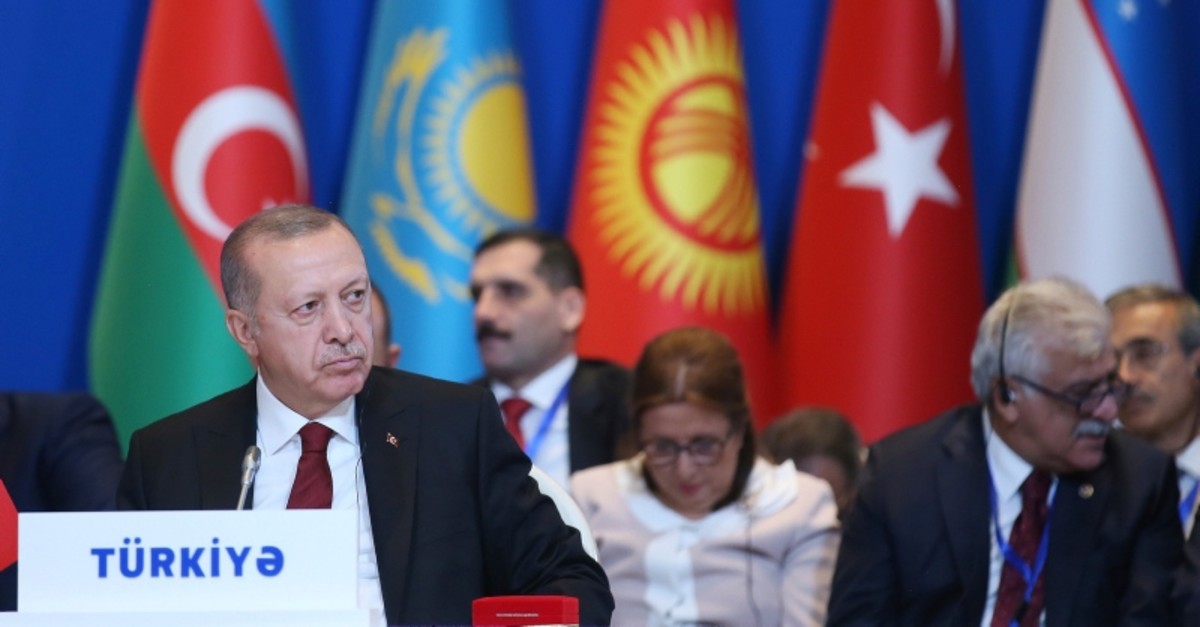 Erdoğan highlighted the importance of cooperation and coordination among Turkic countries, pointing to the rising role of multilateral platforms in international politics

President Recep Tayyip Erdoğan has called the latest Turkic Council summit historic due to the council’s growing influence.
He added that Turkey hopes the council will gain observer status in the U.N. Security Council and the Organisation of Islamic Cooperation (OIC).

He was speaking at the 7th Summit of the Cooperation Council of Turkic Speaking States, widely known as the Turkic Council, in Azerbaijan's capital Baku.

“This summit has a historical aspect. We see that the role of structures such as the Turkic Council in global policy has been growing,” Erdoğan said, noting the importance the council attaches to its cooperation and coordination with multilateral platforms.

“We want the council to gain observer status in the U.N. Security Council and the OIC,” he added.

On the issue of the Upper Karabakh conflict, Erdoğan said Armenia's occupation of Azerbaijani lands has forcibly displaced around a million people. "This is an unacceptable situation," he added.

"We will continue to make efforts to peacefully solve the Upper Karabakh issue as soon as possible and based on Azerbaijan's territorial integrity," he noted.

Karabakh - a disputed territory between Azerbaijan and Armenia - broke away from Azerbaijan in 1991 with military support from neighboring Armenia. A peace process has yet to be implemented.

The Nagorno-Karabakh line of contact is a militarized separation barrier that divides Armenian and Azerbaijani forces. It was established immediately after the May 1994 cease-fire that ended the Nagorno-Karabakh War and is monitored by six Organization for Security and Co-operation in Europe (OSCE) observers.

Exchanges of fire occur regularly on the line of contact.

"[The leaders] express their hope and belief that Turkey's Operation Peace Spring will contribute to fighting terrorism, ensuring the territorial integrity of Syria, liberating local Syrians from the oppression of terrorists and creating conditions for the safe and voluntary return of displaced Syrians to their homeland," the 7th summit of the Cooperation Council of Turkic Speaking States said in the declaration.

The Turkic Council was established in 2009 as an intergovernmental organization with the overarching aim of promoting comprehensive cooperation among Turkic speaking states.
Its four founding member states are Azerbaijan, Kazakhstan, Kyrgyzstan and Turkey.
Since 2011, the Turkic Council convenes its annual summits under certain topics, where the heads of state of the Turkic Council evaluate the past period and set goals for the next year.