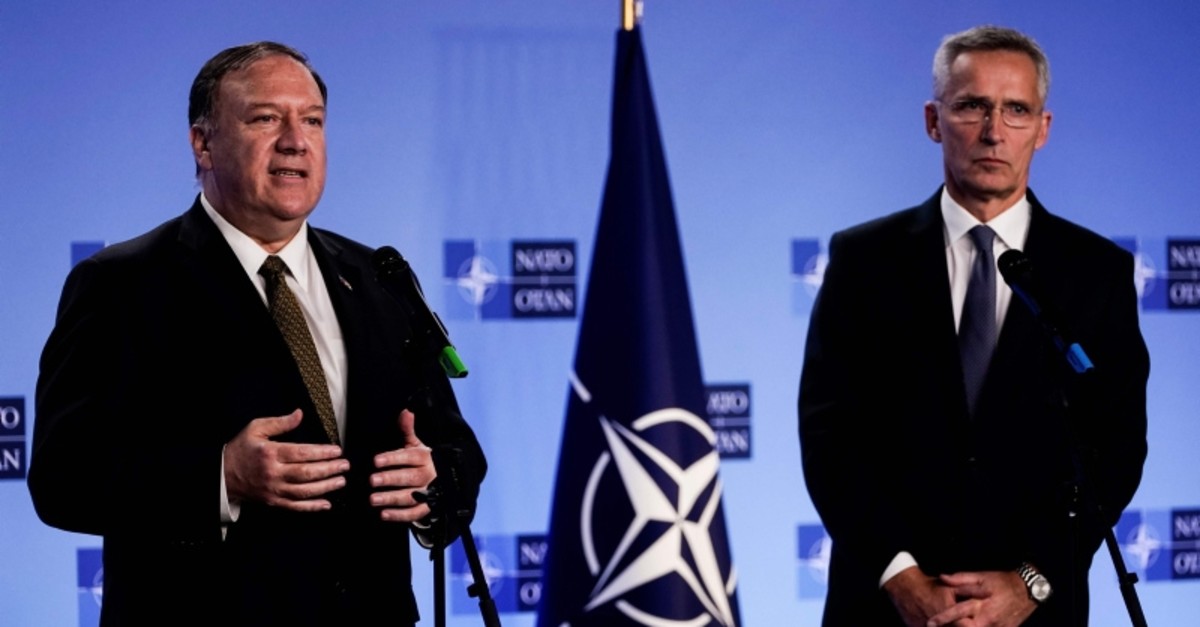 US Secretary of State Mike Pompeo (L) gestures as he delivers a speech during a joint press conference with NATO Secretary General Jens Stoltenberg following their meeting in Brussels, on Oct. 18, 2019 (AFP Photo)
by daily sabah Oct 18, 2019 11:52 pm
NATO Secretary-General Jens Stoltenberg welcomed the agreement between Turkey and the U.S. regarding the safe zone, as he said the development will contribute to de-escalating tensions in northeastern Syria.
"I welcome that two NATO allies, the United States and Turkey, have agreed on a way forward," Stoltenberg said in a joint news conference with U.S. Secretary of State Mike Pompeo in Brussels.
Noting that he briefed the council regarding the recent agreement, Stoltenberg said he is pleased about it.
Stoltenberg highlighted that the situation in northeastern Syria is still "fragile," and that it is considered as a significant issue by all members of the alliance.
Referring to his recent official meeting inTurkey, the NATO chief said the country is at the forefront of an unstable region and has been the target of the most terrorist attacks among NATO allies.
Stoltenberg also reiterated that Turkey has legitimate security concerns, as he praised the country for hosting a countless number of refugees.
Meanwhile, Pompeo also said it is important to inform NATO allies about the recent talks in Turkey.
"We're now some 24 hours into this. We're very hopeful that we will be able to implement and execute" the pausing of Turkey's Operation Peace Spring, Pompeo said.
The top U.S. diplomat said he expects commitments pledged by all parties being respected within the next four days, while he highlighted that intense coordination was necessary to withdraw the terrorist People's Protection Units (YPG) fighters in the area.
Turkey and the U.S. reached a deal on Thursday, which involves the withdrawal of YPG terrorists from the demarcation line 20 miles (32 kilometers) south of the Turkish border. The U.S. will facilitate the withdrawal, while Turkey has agreed to pause Operation Peace Spring for 120 hours.
Last Update: Dec 20, 2019 1:08 am
RELATED TOPICS