US needs to play by Turkey's rules to get out of the mess in Syria, expert says 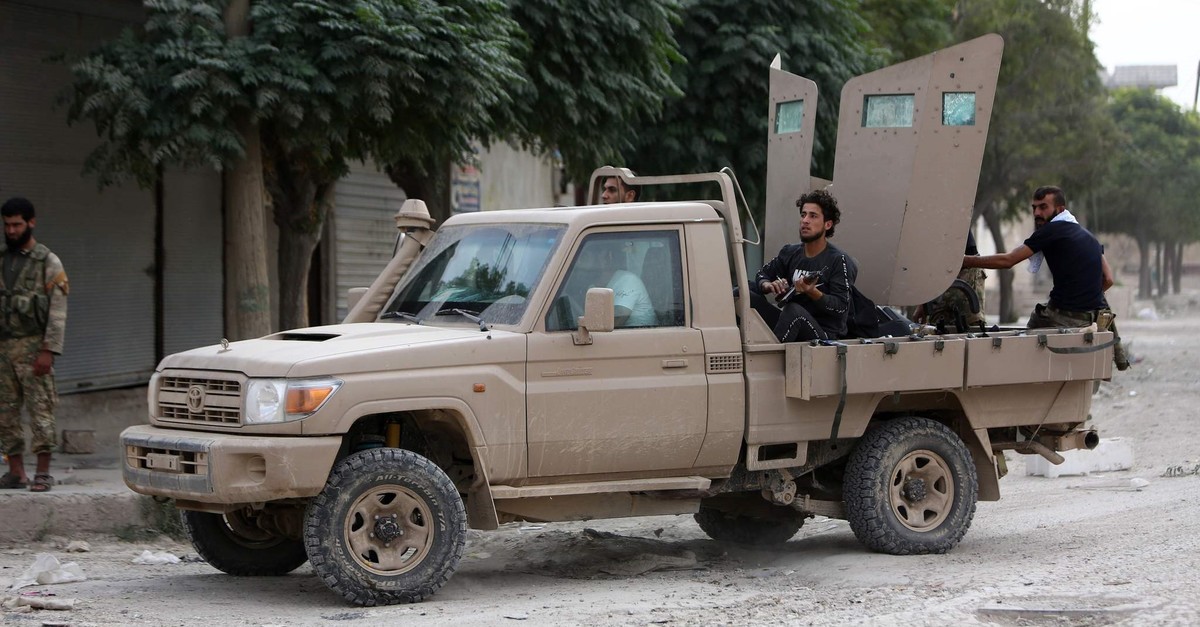 Turkey-backed Syrian fighters patrol on a street near a postition that they are holding in the Syrian border town of Ras al-Ain on Oct. 19, 2019 (AFP Photo)
by daily sabah Oct 19, 2019 10:26 pm
Getting out of the mess the U.S. created by allying with a terrorist affiliated group in Syria will only be possible if Washington fixes its ties with Ankara and works through them on their terms, a senior fellow at the Hudson Institute said.
Mike Doran criticized the U.S. policy in Syria for setting the country on a collision course with a NATO ally for the sake of the People’s Protection Units (YPG), which is the Syrian offshoot of the PKK terrorist organization.
“The Turks have been telling us for years now that they don't like the fact that we are providing a power umbrella under which the PKK can build an autonomous Kurdish statelet in northeastern Syria,” Doran told a Hudson Institute panel titled “After the Syrian Pullback: What Next for U.S. Middle East Policy?”
Doran told the panel that the U.S. attempted to rebrand the PKK as the YPG-dominated Syrian Democratic Forces (SDF) by bringing in some Arabs and Yazidis, but the power center of that organization has always been dominated by the terrorist organization.
He noted that although the Obama administration convinced Americans that the SDF was “something other than PKK,” it has failed to convince the Turks, who opposed it for destroying bilateral relations.
In order to get out of the mess in Syria, the U.S. needs to reestablish strong ties with Ankara because the U.S. troops will eventually leave the region, but Turkey will stay there forever.
“So we have to work through them, largely on their terms,” Doran suggested.
He continued by highlighting one of the fundamental points of political science, saying that Washington needs to recognize the fact that states are the main actors:
“The strategic prize is Turkey. And the strategic goal, when all of this settles, is that we can contain Iran,” Doran said, noting that the country is geographically located in a strategic region between Europe and Asia, and hosts U.S. bases, intelligence platforms and gives the U.S. the ability to stop Russia through the Bosporus.
Doran questioned the U.S. policy once again by saying that it does not make sense for the country to ditch a strategic ally for a terrorist organization that does not even represent the Kurds.
“The PKK is not the Kurds. This makes no sense. We now have a bipartisan consensus in Congress to put massive sanctions on Turkey in order to save our relationship with the PKK. How did we get to this position? It makes no sense.”
The U.S. has provided military training and given truckloads of military support to the YPG, despite Turkey's security concerns.
The U.S. currently has around 2,000 personnel in 18 bases and military locations in Syria.
To reduce tensions, Turkey and the U.S. agreed on a road map in June 2018 foreseeing the withdrawal of the YPG from Manbij and installing joint Turkish-American patrols, which began in November. However, the process has been sluggish as the terrorist group was still present in the city despite the three-month timetable set for implementing the deal.
Turkey launched Operation Peace Spring, the third in a series of cross-border anti-terror operations in northern Syria targeting terrorists affiliated with Daesh and the PKK's Syrian offshoot the People's Protection Units (YPG), on Oct. 9 at 4 p.m.
The operation, conducted in line with the country's right to self-defense borne out of international law and U.N. Security Council resolutions, aims to establish a terror-free safe zone for Syrians return in the area east of the Euphrates River controlled by the U.S.-backed Syrian Democratic Forces (SDF), which is dominated by YPG terrorists.
The PKK — listed as a terrorist organization by Turkey, the U.S. and the European Union — has waged a terror campaign against Turkey for more than 30 years, resulting in the deaths of nearly 40,000 people, including women, children, and infants.