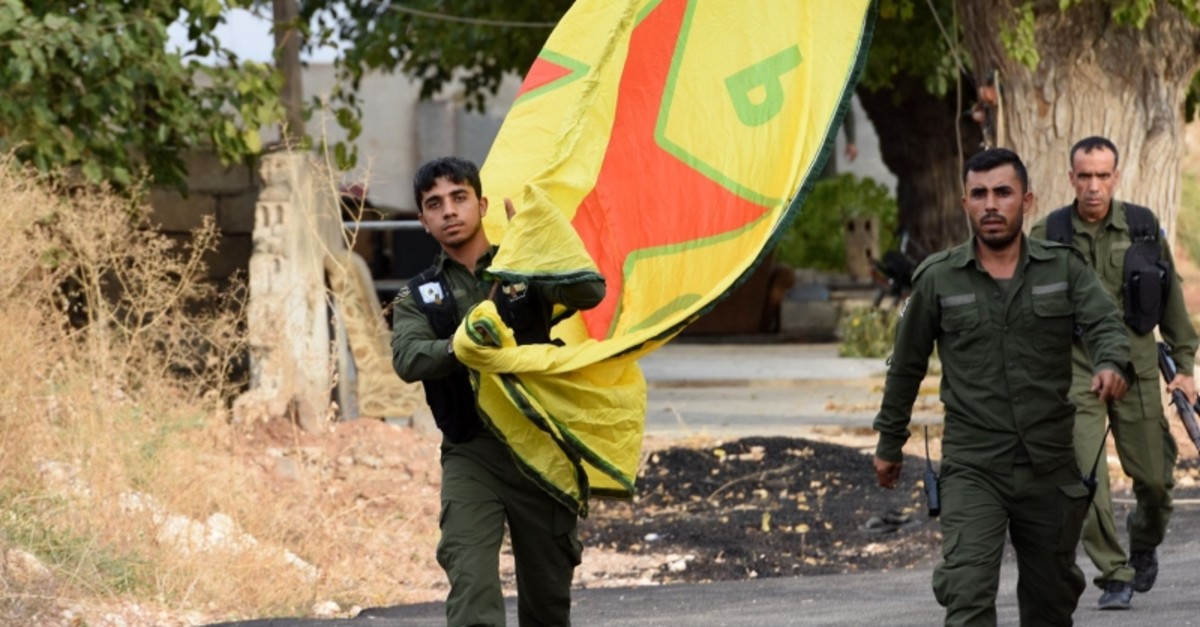 YPG terrorists walk carrying a People's Protection Units (YPG) yellow flag in the Syrian town of Ain al-Arab, along the border with Turkey in the north of Aleppo governorate on Ocotber 18, 2019. (AFP Photo)
by Daily Sabah Oct 23, 2019 1:22 am

The Ministry of Foreign Affairs stated in a statement later that U.S. Secretary of State Mike Pompeo has confirmed that the YPG retreated.

"Turkey and the United States reached an agreement on 17 October 2019 regarding the northeast of Syria and as stipulated by that agreement Operation Peace Spring was paused for 120 hours. We have shown due sensitivity in fulfilling all the obligations we agreed to," the statement said.

Turkish and U.S. delegations reached an agreement recently to pause Turkey's counterterrorism operation in northern Syria for 120 hours, in which the PKK terrorist group's Syrian affiliate YPG was expected to withdraw from the designated safe zone area.

"The Sochi agreement includes articles upholding Turkey's border security and withdrawal of YPG terrorist elements 30 km. away from our border. At this stage, there is no further need to conduct a new operation outside the present operation area," the defense ministry said in a statement released early Wednesday.

"Turkey will never let a terror corridor be established to the south of her borders and our resolute fight against terrorism will continue. So by creating a peace corridor in the area, we will ensure the safe and voluntary return of displaced Syrian brothers and sisters to their homes and lands," the statement added.

A senior Turkish official said Turkish and Russian delegations had very productive meetings in Sochi earlier on the same day and had reached an "excellent agreement" regarding the situation in northern Syria.

In 2017, the Astana peace process to end the Syrian conflict was spearheaded by Turkey, Russia and Iran in Nur-Sultan (formerly Astana), Kazakhstan's capital, and since then it has seen over a dozen meetings.

Since then, over 5 million civilians have become refugees. Turkey hosts 3.6 million of them, the most any country does in the world.