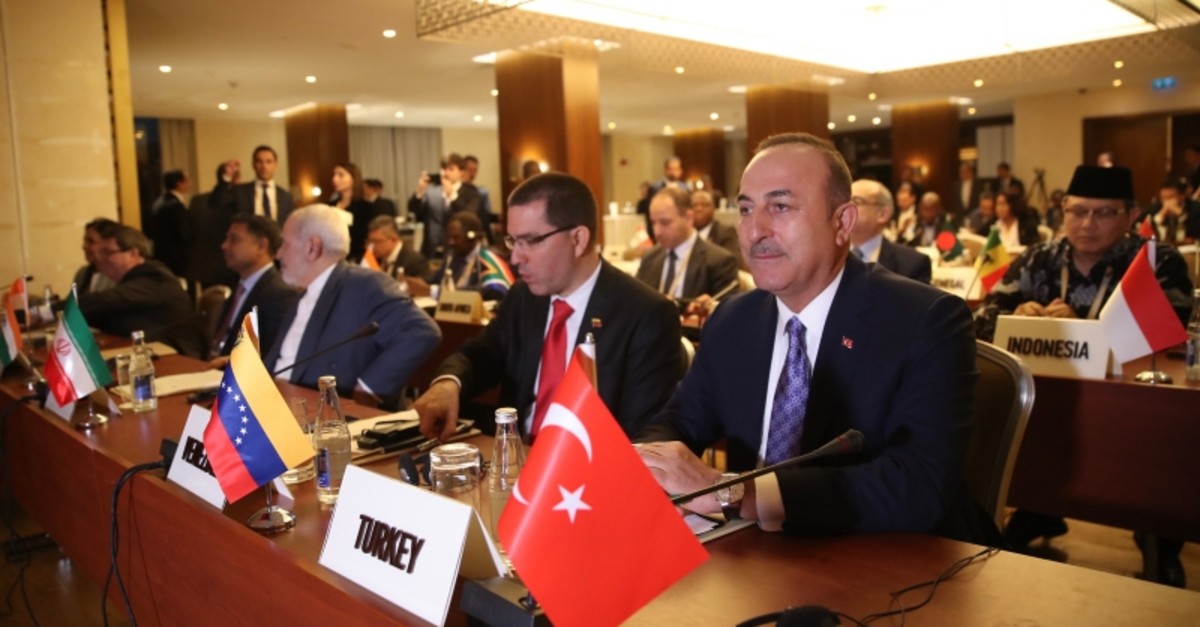 | AA Photo
by Anadolu Agency Oct 23, 2019 10:59 pm
Foreign Minister Mevlüt Çavuşoğlu urged the international community on Wednesday to join forces against Israel's attempts to weaken the two-state solution of Palestine.
"In order to support the Palestinian nation, the international community should act against Israel's efforts to weaken two-state solution," Çavuşoğlu told a Ministerial Committee on Palestine as part of the 18th summit of Non-Aligned Movement (NAM) in the Azerbaijani capital Baku.
Çavuşoğlu said he stands by the legitimate fight of NAM — which was established to support decolonization, independence and national solidarity — for freedom and self-determination of the Palestinian nation, and noted that the Palestinian cause is going through one of the toughest periods of its history.
Çavuşoğlu said Israel's occupation and expansionist policies are ongoing in Palestine, and added that Israeli Prime Minister Benjamin Netanyahu's latest remarks during election campaign reiterated his vision to turn the state into a "racist apartheid state."
Stressing that the Palestinian people are always living in an emergency state, he called on NAM members to urge Israel to comply with international law.
"We need to put pressure on Israel to avoid more harmful activities, including new illegal settlement area decisions, violation of the rights of the Palestinians, and attempts to erode Jerusalem's legal and historical conditions," he said.
Jerusalem remains at the heart of the perennial Middle East conflict, with Palestinians hoping East Jerusalem — occupied by Israel since 1967 — might eventually serve as the capital of an independent Palestinian state.
The Israeli-Palestinian peace process collapsed in mid-2014 due to Israel's continued refusal to halt West Bank settlement building and accept pre-1967 borders as a basis for a two-state solution.
Çavuşoğlu also said recognition of Palestine by all international community is "compulsory" for lasting peace.
"I call on all members that do not recognize Palestine to do it," he said.
The meeting, hosted by Azerbaijani Foreign Minister Elmar Mammadyarov, included Iranian Foreign Minister Javad Zarif, Venezuelan Foreign Minister Jorge Alberto Arreaza, Permanent Observer of Palestine to the U.N. Riyadh Mansour.
Officials from Bangladesh, Algeria, Indonesia, South Africa, India, Colombia, Cuba, Malaysia, Egypt, Senegal, Sri Lanka, Zambia and Zimbabwe also attended the meeting.