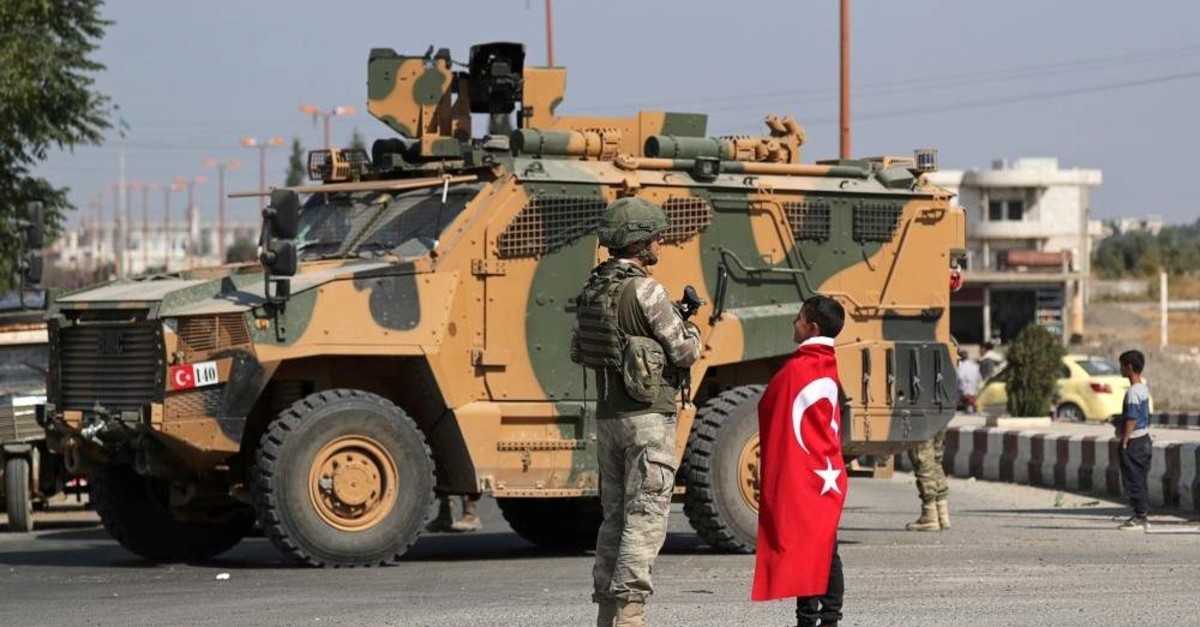 A boy wearing a Turkish flag stands next to a Turkish soldier in the town of Tal Abyad, Syria Oct. 23, 2019 (Reuters Photo)
by Oct 24, 2019 12:43 pm
Turkey continues to keep in touch with Russian authorities regarding the mechanisms that will be established as part of the safe zone in northeastern Syria as per an agreement signed between Moscow and Ankara, the Defense Ministry said Thursday.
“We continue to work with our Russian counterparts regarding the establishment and control of mechanisms to put the Sochi agreement into practice,” the ministry said.
The ministry continued by saying that the Turkish army has started to carry out humanitarian work by distributing bread to the residents of the Syrian city of Tal Abyad following the establishment of a bakery, while a mobile health clinic provides health services to the people.
The Turkish military liberated the city center of Tal Abyad from YPG/PKK terrorists on Oct. 13 within the scope of Turkey's Operation Peace Spring in northern Syria. Tal Abyad residents started returning to their homes on Oct. 15.
As part of the efforts to normalize life in the area, the Turkish army also continues to destroy underground tunnels used by the PKK’s Syrian offshoot the People’s Protection Units (YPG) in residential areas.
“So far 40 mines and 227 improvised explosive devices have been destroyed to facilitate the return of local residents,” the defense ministry said.
Turkey and Russia reached an agreement to establish a safe zone near the Turkish border in Syria to eliminate the terror threat. The deal also aims to facilitate the voluntary return of Syrian refugees to their homes. 140 villages and 10 district centers will be established within the 30- to 40-kilometer deep safe zone in northern Syria, housing 5,000 and 30,000 inhabitants each, respectively. The settlements will be provided with various facilities so that the people living there will be able to lead normal lives with every need met.
Last Update: Dec 20, 2019 1:12 am
RELATED TOPICS