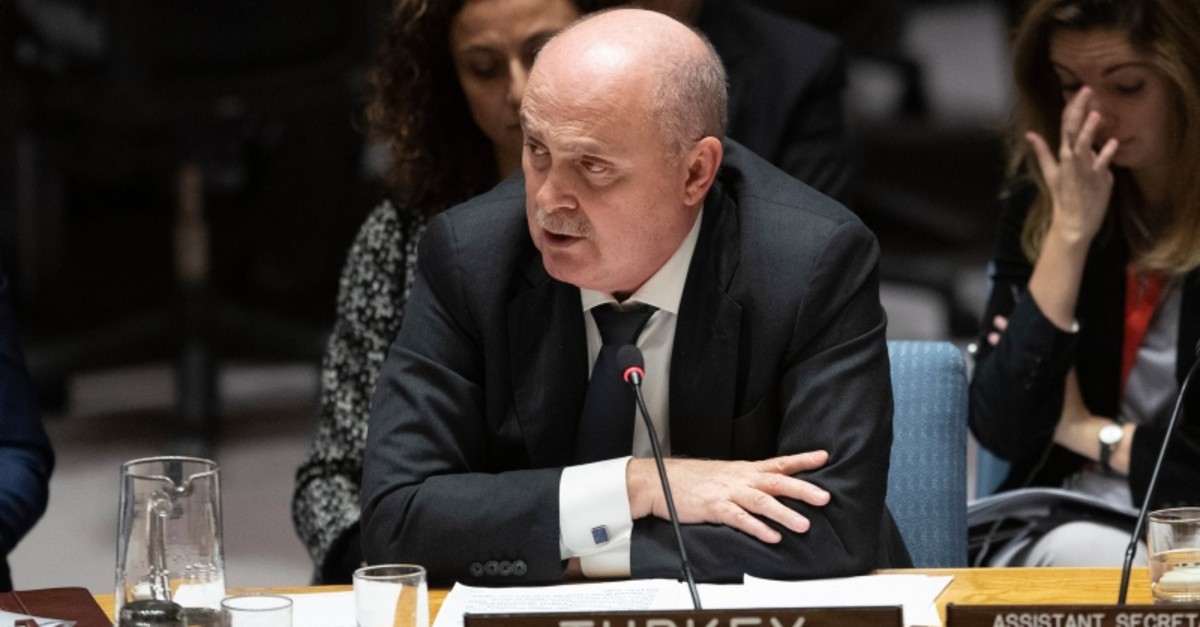 Turkish Ambassador to the United Nations Feridun Sinirlioglu speaks during a Security Council meeting on the situation in Syria, Thursday, Oct. 24, 2019 (AP Photo)
by Anadolu Agency Oct 25, 2019 8:36 am

Turkey's anti-terror operation in northern Syria is line with international law, Ankara's envoy to the U.N. said Thursday, calling for an investigation into any violation by any country for their military operation.
"Any violation of humanitarian law should be investigated and the perpetrators should be held accountable," Feridun Sinirlioğlu told the U.N. Security Council.
"Of course, it is true for every operation conducted by any country, including our American and other friends. It is true for operations not only in Syria, but everywhere."
On Oct. 9, Turkey launched Operation Peace Spring to eliminate terrorists from northern Syria east of the Euphrates River to secure Turkey’s borders, aid in the safe return of Syrian refugees and ensure Syria’s territorial integrity.
The move drew criticism from naysayers around the world, who claimed the Turkish military was conducting an "ethnic cleansing" of the Kurdish population in Syria's northeast.
"Turkey reserves the right of self-defense against terrorist elements that may have remained in the Operation Peace Spring area," said Sinirlioğlu.
Stating that Turkey's fight will always be in accordance with international law, the envoy said the operation only targeted terrorists and their hideouts, weapons and vehicles.
"We took all necessary measures to prevent any harm to civilians and damage to civilian infrastructure," he told the Council. He also said the operation received support from the Syrian people, tribal leaders and representatives of minorities, including the Christian communities.
President Recep Tayyip Erdoğan and his Russian counterpart, Vladimir Putin, held a meeting Tuesday in the Black Sea resort town of Sochi just hours before a pause in Turkey’s operation in northeast Syria was set to expire. Ankara and Moscow reached a deal under which PKK/YPG terrorists will pull back 30 kilometers (19 miles) south of Turkey’s border with northern Syria within 150 hours and security forces from Turkey and Russia will conduct joint patrols there. In its more than 30-year terror campaign against Turkey, the PKK -- listed as a terrorist organization by Turkey, the U.S. and the European Union -- has been responsible for deaths of 40,000 people, including women, children and infants. The YPG is the Syrian offshoot of the PKK.
Last Update: Dec 20, 2019 1:14 am
RELATED TOPICS