Turkey to fight to the end against terrorism in northern Syria, Erdoğan says 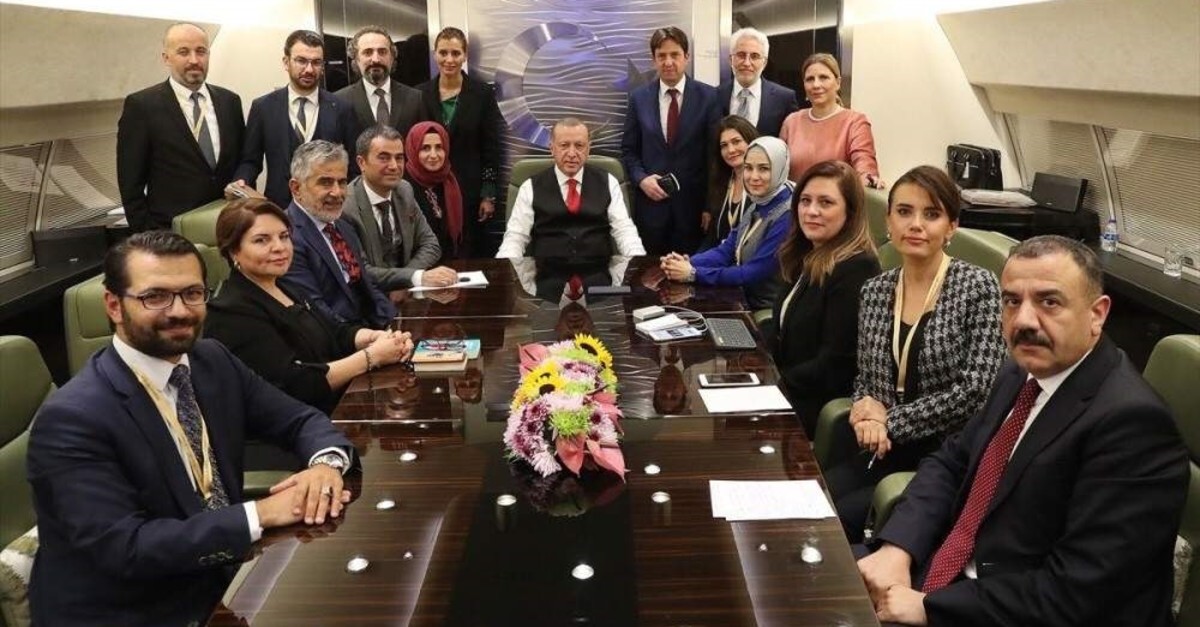 Speaking to journalists accompanying him during his visit to Hungary, Erdoğan stressed that the Turkish army will not leave Syria unless other countries do so. “We have a 911-kilometer border with Syria. Neither Russia nor the U.S. nor Iran has a border here. We will use our rights emanating from the Adana Agreement until terrorist groups are cleared from this area,” he said.

Turkey launched Operation Peace Spring on Oct. 9, in order to clear northeastern Syria, specifically the east of the Euphrates River, of terrorists and create a safe zone along the border, paving the way for the voluntary return of Syrian refugees.

The Adana Agreement was signed between Turkey and Syria in October 1998, and clearly stated that Syria would not allow any PKK activities within its borders and would block any terrorist activities that would threaten Turkey's sovereignty.

Erdoğan stressed that neither the U.S. nor Russia have fully implemented the agreements reached with Turkey last month which envisaged the withdrawal of YPG militants near the Turkish border, underlining that Ankara will continue its military operation if promises are not kept.

“Russia, as is well-known, acts with the (Bashar Assad) regime, which is affiliated with the PKK/YPG terrorist groups in some locations. This affiliation still continues, unchanged. For example, there's Manbij – the U.S. had previously promised us it would expel terrorist groups from that area within 90 days, but after one-and-a-half to two years, they are still there. Thanks to our intelligence we know whatever happens there,” he said.

Under the agreement hammered out in the Russian Black Sea resort city of Sochi between Ankara and Moscow last month after Turkey's cross-border anti-terror operation in Syria, the YPG terrorists were given a 150-hour deadline to withdraw.

Stressing that the YPG has not withdrawn from the areas designated in the agreement reached between Turkey and U.S. last month, Erdoğan said he will discuss the issue during his meeting with Trump on Nov. 13, along with other topics, such as a bill in U.S. House of Representatives on 1915 events and sanction threats.

“I realized during our phone call on Wednesday that Trump is also aware of attempts to intimidate Turkey. He (Trump) said he will examine and speak with officials on the (bill) issue. He also suggested to me to explain the issue to members of the House of Representatives and senators. (After this) I went even further and asked to address Congress. Then he advised me to hold an extensive press conference,” Erdoğan said.

On Oct. 29, the U.S. House of Representatives passed a resolution recognizing the so-called "Armenian genocide" as well as a bill backing sanctions on Ankara. The bill was met with harsh criticism by Turkish officials.

The president added that many other issues including the $100 billion trade volume target, S-400 defense systems, F-35 jets, the Gülenist Terror Group (FETÖ) and the Halkbank issue will be on the table during the meeting.

“Trump said they will be prepared in the best way for the meeting. So we will also be very well prepared (as well). I hope it will be a successful meeting,” he said.

Erdoğan said that during his phone call with Trump he also delivered his condemnation on Washington’s close ties with Ferhad Abdi Şahin, a high-ranking terrorist codenamed "Mazloum Kobani,” slamming previously-offered meditation attempts with Ankara and Şahin.

Interpol currently has a Red Notice issued in Şahin's name for playing a crucial leadership role in the PKK-linked YPG.

“I would not deal with such a terrorist or terrorist organization,” Erdoğan said, further emphasizing that Şahin was involved in numerous terror attacks in Turkey in the past – a bomb attack in southern Antalya in 2006, a bomb attack in Istanbul in 2008, a suicide attack on the southern Mersin-Adana highway, an attack in central Tokat in 2009, an attack on a military outpost in southeastern Hakkari in 2010, a suicide attack in Istanbul during the same year, attacks in southeastern Diyarbakır, Hakkari and in the capital Ankara in 2011 and southeastern Gaziantep in 2012, to name a few.

Şahin is the adopted son of the PKK's imprisoned founder Öcalan, who is now serving a life sentence in a Turkish prison.

Şahin is also sought by the Turkish Interior Ministry in the red category. The ministry divides its wanted list into five color-coded categories, with red marking the most wanted and dangerous. The ranking is followed by blue, green, orange and gray, depending on the sensitivity of the suspect's criminal activity. The terrorist leader's involvement in the PKK goes back to 1996, when he engaged in militant activity in Turkey's southeastern Hakkari province.

Stating that Turkey opened its doors to nearly 350,000 Kurds from Ayn al-Arab, which is also known as Kobani, Erdoğan said that “those who present themselves as representatives of the Kurdish people have not helped these people.”

“We care for 3.6 million refugees, mostly Arabs. There are also Christians, Arameans, Chaldeans and Yazidis. On the other hand, the Arab League holds sessions and takes a hostile stance against Turkey. Have they ever spent a penny for these people?”

Erdoğan also recalled Turkey’s project to accommodate a large number of Syrian refugees in the safe zone, adding that he has been explaining the details of the plan to all leaders he speaks to on the issue.

The details of the plan emerged in September, with the eventual goal being to resettle about 1 million Syrians within the area east of the Euphrates.

According to the plan, 140 villages and 10 district centers will be established within the 30-40-km-deep safe zone in northern Syria, housing 5,000 and 30,000 inhabitants each, respectively. The settlements will be provided with various facilities so those living there will be able to have a normal life with every necessity met.

Speaking on Turkey’s fight against Daesh, Erdoğan said Turkey has fulfilled its own responsibilities on the issue, detaining and sending 7,600 foreign terrorists back to their home countries.

“We have 1,149 militants in our prisons. We have also detained 270 Daesh militants who fled from Daesh camps in Syria. We neutralized 3,500 militants in Operation Euphrates Shield. These are the official numbers for now. There is no other country in the world that struggles against Daesh as much as Turkey,” he said.