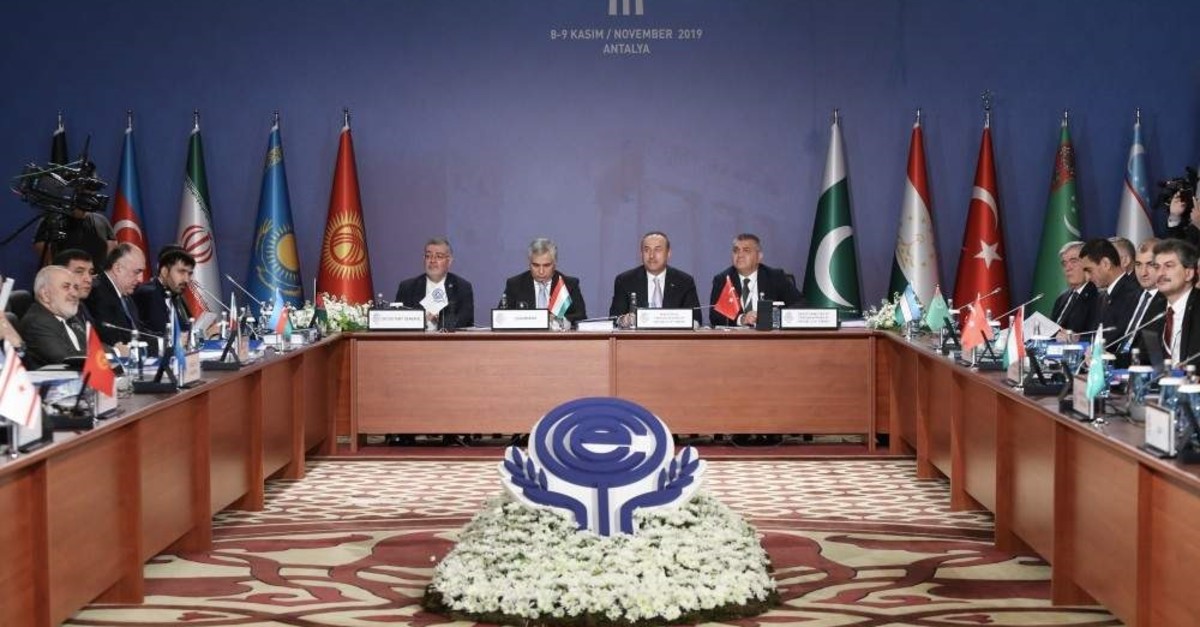 FM u00c7avuu015fou011flu chairs 24th Economic Cooperation Organization (ECO) Council of Ministers Meeting in Antalya on Nov. 9, 2019 (AA Photo)
by Daily Sabah Nov 09, 2019 4:23 pm
Nobody can lay any claims to the natural resources of Syria except for the country’s own people, Foreign Minister Mevlüt Çavuşoğlu said Saturday, criticizing foreign interference in the country’s oil reserves.
Chairing the 24th Economic Cooperation Organization (ECO) Council of Ministers Meeting in Turkey's Mediterranean resort city of Antalya, Çavuşoğlu criticized the U.S.’ recent statements about Syria’s oil reserves.
“They openly confess that they are there for the oil. We are talking about a country that does not hide the fact that they are in a country to confiscate its natural resources and the funds from these resources are used to support terrorist organizations like the PKK/YPG,” Çavuşoğlu said, referring to the People’s Protection Units (YPG), which is the Syrian offshoot of the PKK.
He continued by adding that Turkey is closely watching statements made by the U.S. regarding the matter.
Noting that the YPG is also involved in oil smuggling like Daesh is, Çavuşoğlu said that terrorists should be prevented from accessing natural resources.
“We launched Operation Peace Spring in Syria to clear the terrorists, unlike other countries like the U.S., which is there to confiscate the country’s resources,” Çavuşoğlu said and added that this operation ensured Syria’s territorial integrity by preventing the formation of a terror state in the area.
“We will continue to work to ensure stability in the region,” he said.
The U.S. president publicly acknowledged that main goal of deploying additional troops was to protect the Syrian oil reserves, while the U.S. military insists that it is there to defeat Daesh.
Çavuşoğlu said Donald Trump’s statement about Syrian oil reserves violates international law.
“We are against this. These reserves belong to the Syrian people and should be facilitated in a way that will benefit the Syrian people,” Çavuşoğlu added.
The U.S. has primarily partnered with the YPG in northeastern Syria in the anti-Daesh fight. Turkey strongly opposes the YPG's presence in northern Syria, which has been a major sticking point in strained Turkey-U.S. relations. The U.S. has provided military training and given thousands of truckloads of military support to the YPG, despite its NATO ally's security concerns.
Last Update: Dec 20, 2019 1:33 am
RELATED TOPICS