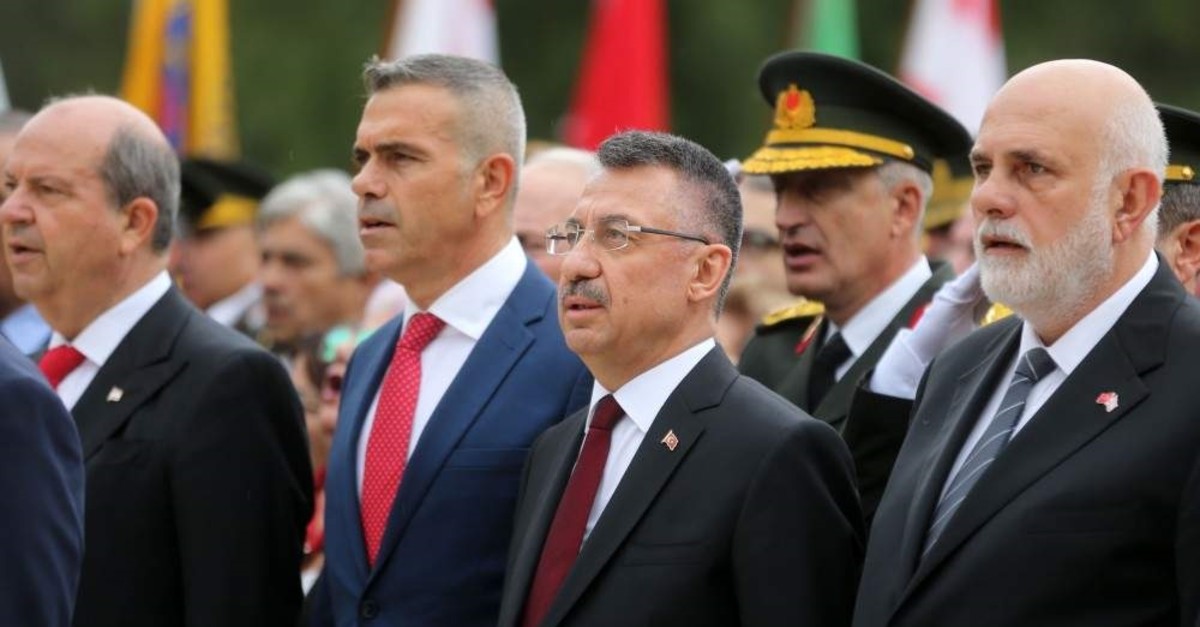 The framework for restrictive measures adopted by the European Union Council in response to Turkey’s drilling activities in Eastern Mediterranean is null and void, Vice President Fuat Oktay said at a ceremony marking the 36th anniversary of the Turkish Republic of Northern Cyprus.
“Turkey has been defending the idea that the energy resources in the Mediterranean should be used as an opportunity to bring peace and stability on the island,” Oktay said, adding that the Greek Cypriots have been exploiting their membership in the European Union by claiming they are the only owners of the island.
Oktay continued by saying that Turkey will not give up its legitimate interests in the Mediterranean despite efforts.
The vice president also said that TRNC has covered a lot of ground in the past three decades and that Turkey welcomes the efforts of the TRNC government to boost prosperity on the island.
Oktay attended the official ceremony held in the Turkish Republic of Northern Cyprus (TRNC) to mark its 36th foundation anniversary.
During the ceremony, the participants observed a minute of silence. Fuat Oktay, together with TRNC President Mustafa Akıncı, laid a wreath at the Lefkoşa Atatürk monument.
Then, as part of a tradition, Oktay signed the record book at the monument and wrote that TRNC was founded as a result of the resolute stance of Turkish Cypriots and Turkey was proud to mark the foundation of the country.
"TRNC grows stronger with development," he wrote, adding the country made progress by advancing side by side with Turkey.
Oktay noted that Turkey would continue to stand by "brotherly" Turkish Cypriots.
The organization was largely attended by officials from Turkey and TRNC, including the latter's president, prime minister, parliament speaker, former's parliament speaker and lawmakers from ruling and opposition parties.
TRNC was established on Nov. 15, 1983, almost a decade after Turkey's Cyprus Peace Operation on the island, which stopped persecution and violence against Turkish Cypriots by ultra-nationalist Greek Cypriots.