NATO highlights Turkey's role in fight against terrorism in Syria 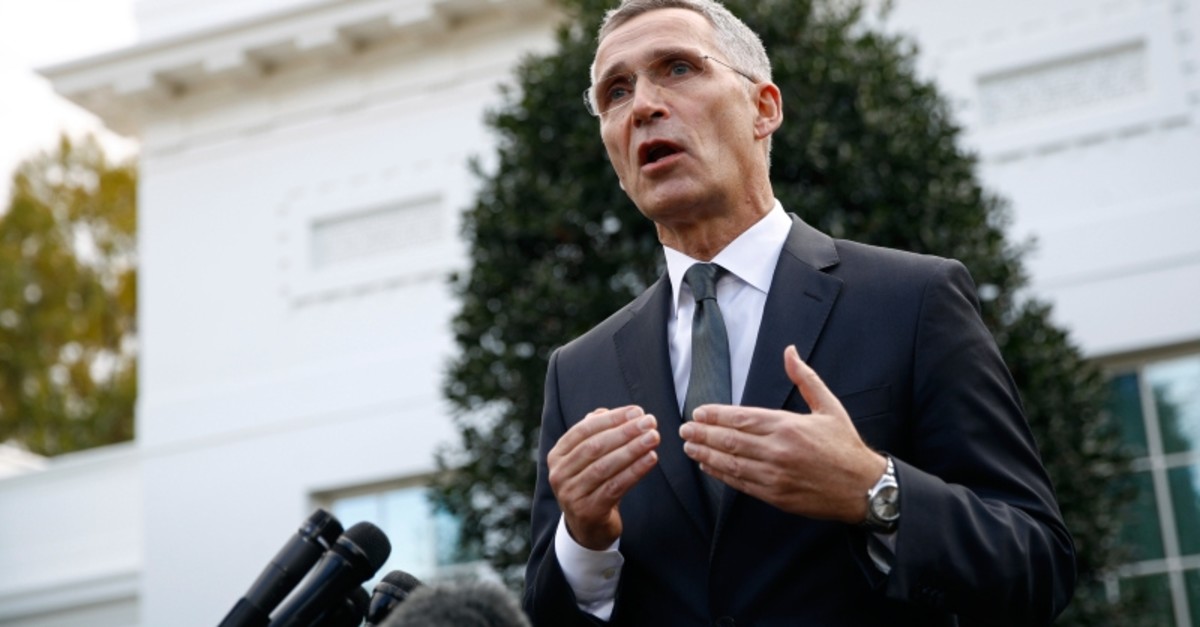 | AP Photo
by Daily Sabah with AA Nov 15, 2019 5:54 pm
Turkey’s role in the fight against terrorism is crucial despite the different views on Ankara’s military operations in northern Syria, NATO Secretary-General Jens Stoltenberg said Thursday.
Speaking at a press conference after his meeting with U.S. President Donald Trump, the secretary-general stressed that Turkey hosts about 3.6 million Syrian refugees, adding that Turkey’s role in anti-terror efforts is important.
Turkey launched Operation Peace Spring on Oct. 9 to clear northeastern Syria, east of the Euphrates River, of terrorists and to create a safe zone along the border, which would, in turn, pave the way for the voluntary return of Syrian refugees.
Stoltenberg added that NATO welcomes talks between Ankara and Washington on the acquisition of the Patriot defense system, an issue that has been causing a rift between the two NATO allies.
"We have the second-biggest army in NATO and have strong ties with the U.S. Still, we need to diversify our defense sources for our national interests," President Recep Tayyip Erdoğan said Thursday, adding that he informed the U.S. that Turkey is still willing to buy the Patriots.
U.S. officials urged Turkey to buy U.S. Patriot missiles, arguing the Russian S-400 system would be incompatible with NATO systems, expose the F-35s to possible Russian subterfuge and could trigger sanctions. Following protracted efforts to purchase an air defense system from the U.S. with no success, Ankara decided in 2017 to purchase the Russian S-400s. Turkey, however, emphasized the S-400 would not be integrated into NATO systems and would not pose a threat to the alliance.
Indicating that killing of Daesh leader Abu Bakr al-Baghdadi was a milestone in the international fight against terrorism, Stoltenberg rejected the “brain death” comments made by French President Emmanuel Macron about the alliance, saying NATO has never been stronger.
Earlier this month, Macron in an interview with The Economist warned fellow European countries that they could no longer rely on the U.S. to defend NATO allies. "What we are currently experiencing is the brain death of NATO," Macron said.
Kurds flee from northern Syria due to YPG, US official confirms
The U.S. special envoy for the anti-Daesh coalition, James Jeffrey, said Thursday that Turkey "correctly" noted that a significant number of Kurds fearing Daesh and the PKK’s Syrian affiliate, People’s Protection Units (YPG), had fled northeastern Syria.
"The Turks also point out correctly that there is a large number, their estimate is 350,000, I don't think it's that far off, of Kurds who fled northeast Syria, some from Daesh, some, to be honest from the YPG," Jeffrey told reporters during a news conference at the end of the anti-Daesh coalition's gathering of foreign ministers.
"And those people want to come back as well. And a Kurd is a Kurd," Jeffrey added.
Locals in YPG-controlled areas have long suffered from YPG atrocities and the terrorist organization has a lengthy record of human rights abuses in Syria, ranging from kidnappings of suspected persons, recruiting child soldiers, torture, ethnic cleansing and forced displacement.
Speaking on U.S. cooperation with the YPG, Foreign Minister Mevlüt Çavuşoğlu asked the anti-Daesh coalition partners on Thursday to refrain from partnering with the YPG, calling it a terrorist entity that must be treated as such.
Çavuşoğlu told the gathering of coalition foreign ministers that members must work with "legitimate partners," stating that the PKK's Syrian offshoot has been responsible for more than 300 attacks in the last two years against Turks and Syrians.
That includes the firing over 1,000 rockets and mortars at Turkish towns that resulted in almost 200 Turkish casualties, he said.
"The YPG has committed crimes against humanity," he said, citing mass killings and assassinations among others during the meeting at the State Department. "We expect all our coalition partners to disengage from YPG."
To prevent the YPG from forming a "terrorist corridor" in northern Syria, Turkey, along with the Syrian National Army (SNA), launched Operation Peace Spring. SNA commanders announced that at least 224 fighters of the SNA have been killed in attacks by YPG terrorists since the beginning of the operation last month.
According to SNA commanders in the field, a total of 692 SNA soldiers were wounded and one soldier went missing during the operation.
SNA soldiers have been thwarting the attacks and violations by terrorists, especially in the northern Tal Abyad and Ras al-Ayn districts, recently liberated from YPG terrorists.
Last Update: Dec 20, 2019 1:42 am
RELATED TOPICS