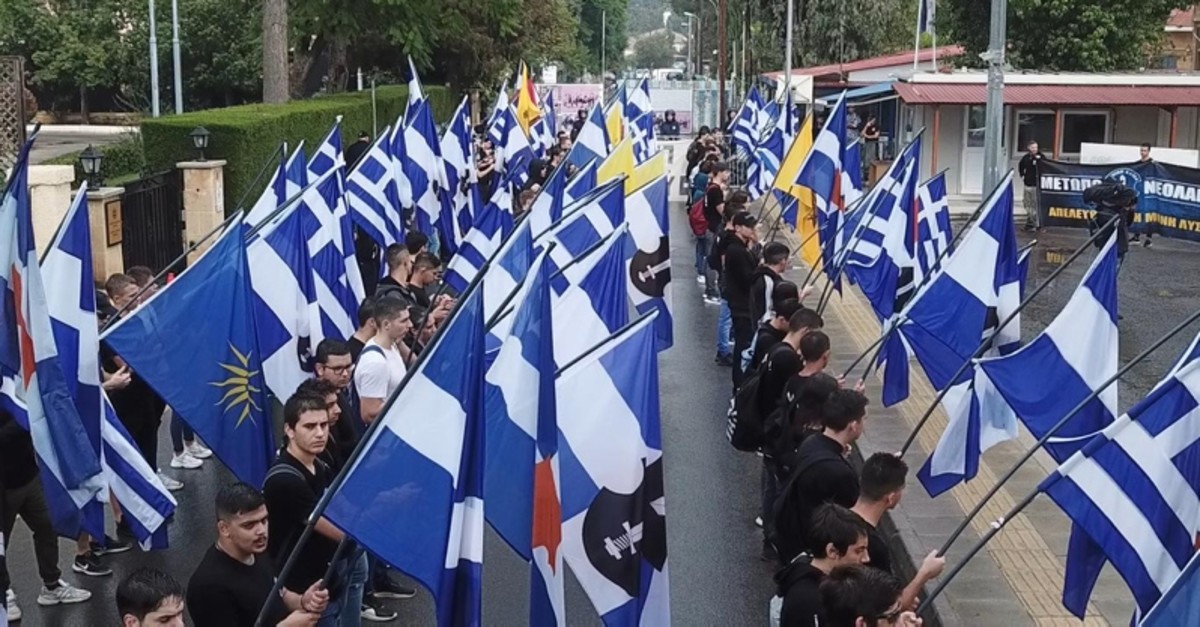 Turkish Cypriots celebrated the 36th anniversary of their country’s foundation on Friday, with an emphasis on peace and stability that has long been desired. However, the celebrations have not been welcomed by the Greek side as they organized fanatical protests, going as far as to burn a Turkish Cypriot flag, fueling the decades-long feud.
The far-right National Popular Front (ELAM) which is the Greek Cypriot wing of Greece’s Golden Dawn political party, organized three separate racist protests where they shout anti-Turkish and anti-Turkey slogans full of insults, in addition to burning a Turkish Republic of Northern Cyprus (TRNC) flag. The Progressive Party of Working People (AKEL), a communist political party which is currently the main opposition party of the country that claims to be in favor of a solution to the decades long crisis, also participated in the protests.
While the Greek police refrained from interfering in the protests, the Turkish side reacted harshly. The TRNC’s Deputy Prime Minister and Foreign Affairs Minister Kudret Özersay announced that an investigation has been launched to determine the identities of those who burned the flag by examining the protest footage. Informing the media that the police and the chief prosecutor have been consulted on the matter, Özersay said that they will also be in touch with the United Nations while determining the identities of the perpetrators, and then the necessary measures will be taken. It is expected that the protesters who burned the flag will be issued arrest warrants that can be enforced if they cross the border to the Turkish side of the island.
“The ones who do not respect the flags, symbols and values of the people who are different from them lack civilization,” Özersay said on the issue.
Meanwhile, while Greeks were protesting the anniversary of the TRNC’s foundation, Jane Holl Lute, the U.N. special envoy on the Cyprus dispute, came to the island to meet with the leaders of the both side under the scope of solution efforts, ahead of a summit that will be held in Berlin on Nov. 25.
Cyprus has been divided since 1974 when Turkey used its guarantor rights to intervene on the island after a far-right Greek Cypriot military coup sponsored by the military junta then in power in Athens sought to unite the island with Greece.
The coup followed a decade of interethnic violence and terrorism targeting Turkish Cypriots, who were forced to live in enclaves when Greek Cypriots unilaterally changed the constitution in 1963 and stripped the island's Turks of their political rights. The TRNC, established in 1983 on the northern one-third of the island, is only recognized by Turkey and faces a longstanding embargo in commerce, transportation and culture. Meanwhile, the Greek Cypriot administration enjoys recognition by the international community as the Republic of Cyprus, established in 1960, which is a member of the EU.
The divided island has seen an on-and-off peace process in recent years, including the latest initiative in Switzerland under the auspices of guarantor countries Turkey, Greece and the U.K. that collapsed in 2017.
U.N. Secretary-General Antonio Guterres said on Thursday that the desire for a settlement on Cyprus continued to prevail among both nations on the divided island, but that trust remains low.
"People are skeptical about the prospects for successful talks," he said in a report, a day before submitting it to the U.N. General Assembly.
The report assesses the negotiation process in line with recent developments.
In the report, Guterres said that despite "repeated calls" on both leaders to better inform the two communities about the "contours of a settlement" and to improve the overall conditions and atmosphere for the process, the climate had "deteriorated further."
Last Update: Dec 20, 2019 1:44 am
RELATED TOPICS