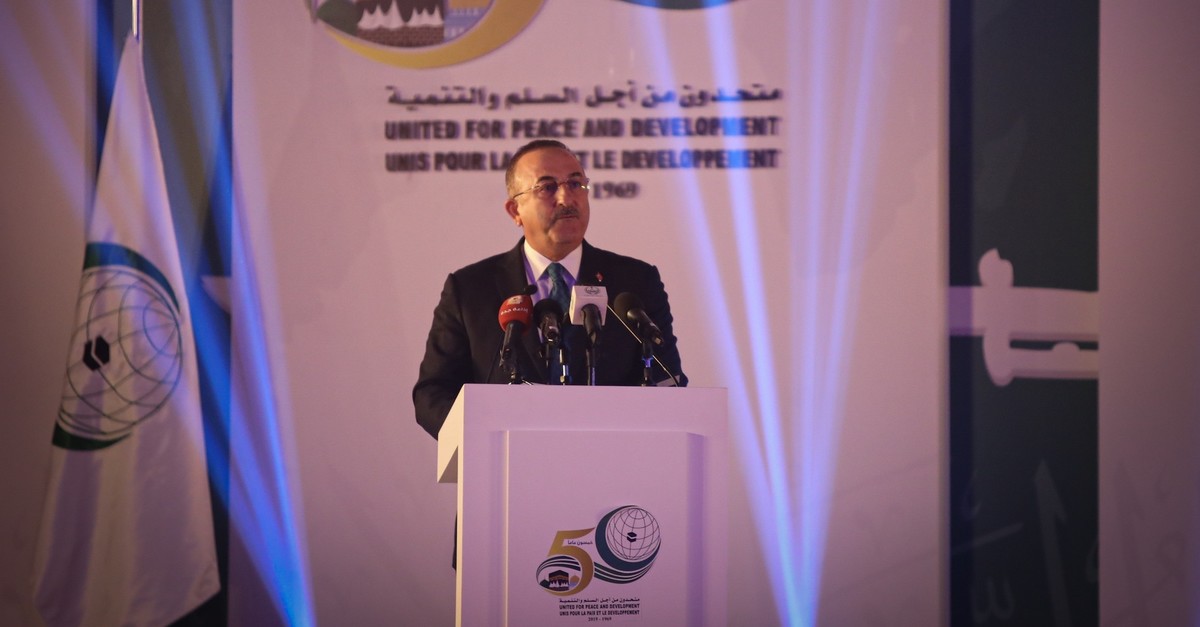 Foreign Minister Mevlüt Çavuşoğlu on Monday reiterated the Muslim world's support for Palestinians resisting against the occupation of Jerusalem and atrocities being committed by the Israeli government.

"I hail them all; from the little children on the streets of Gaza marching for freedom and honor, to men and women who resist the occupation of Jerusalem, as well as the brave men and women fighting against the racist and inhumane isolation of Palestinians," Çavuşoğlu said at a ceremony marking the 50th anniversary of the founding of the Organization of Islamic Cooperation (OIC) in Jeddah, Saudi Arabia.

“Fifty years ago, Al-Aqsa mosque returned from the brink of a disaster,” Çavuşoğlu said, referring to the most serious assault on the mosque that occurred in August 1969, when Australian Jewish extremist Denis Michael Rohan set fire to the building and causing partial damage. “For the Muslim Ummah, this heinous attack was a wake-up call and achieve our long-desired goal of unity and solidarity to protect Al-Aqsa mosque and protect right of the Palestinian people,” he added.

Established in 1969 following Rohan’s attack, the Organization of Islamic Cooperation is the second largest intergovernmental organization after the United Nations, with 57 member states from four continents. It serves as a collective voice for the Muslim world.

“I would like to pay tribute to late King Faisal bin Abdulaziz of Saudi Arabia and the late King Hassan II of Morocco for their call for the Ummah to convene and unite in Rabat. Turkey and many Asian group members responded to this call without hesitation,” Çavuşoğlu stressed.

“The Rabat Declaration reaffirmed our commitment to the principle of peace; but peace with honor and justice,” he added.

Listing the achievements of the OIC, the top diplomat included a reminder that the group had convened an emergency U.N. General Assembly session on the protection of Jerusalem's status and rights of Palestinians.

"It is our organization's duty to defend the honor and rights of all Muslim nations, minorities and communities, including the people of Rakhine [State in Myanmar], Kashmiris, Uighurs, and Turkish Cypriots, Turkish minorities in Western Thrace, and Muslims in Northern America and Europe," he added.

He said Turkey, as an active member of the bloc, was leading these fights and raising its voice against Islamophobia.

“In the face of increasing attacks against Islam and Muslims, we should be vigilant more than ever... I am glad that the peace and dialogue contact group initiated and chaired by Indonesia already adopted a plan of action on combatting Islamophobia. We are also working with Malaysia and Pakistan on a joint TV to fight Islamophobia,” he said.

The decision to establish a TV network to fight against anti-Islamic sentiments was made during a trilateral meeting between Pakistani Prime Minister Imran Khan, President Recep Tayyip Erdoğan and Malaysian Prime Minister Mahathir Mohamad in the 74th session of the U.N. General Assembly in New York in September. Regarding the network, Presidency Communications Director Fahrettin Altun said that the channel would constitute a strong global brand with high-quality content in English.

Turkey took over term presidency of the OIC from Egypt in April 2016, before handing it to Saudi Arabia in May 2019.