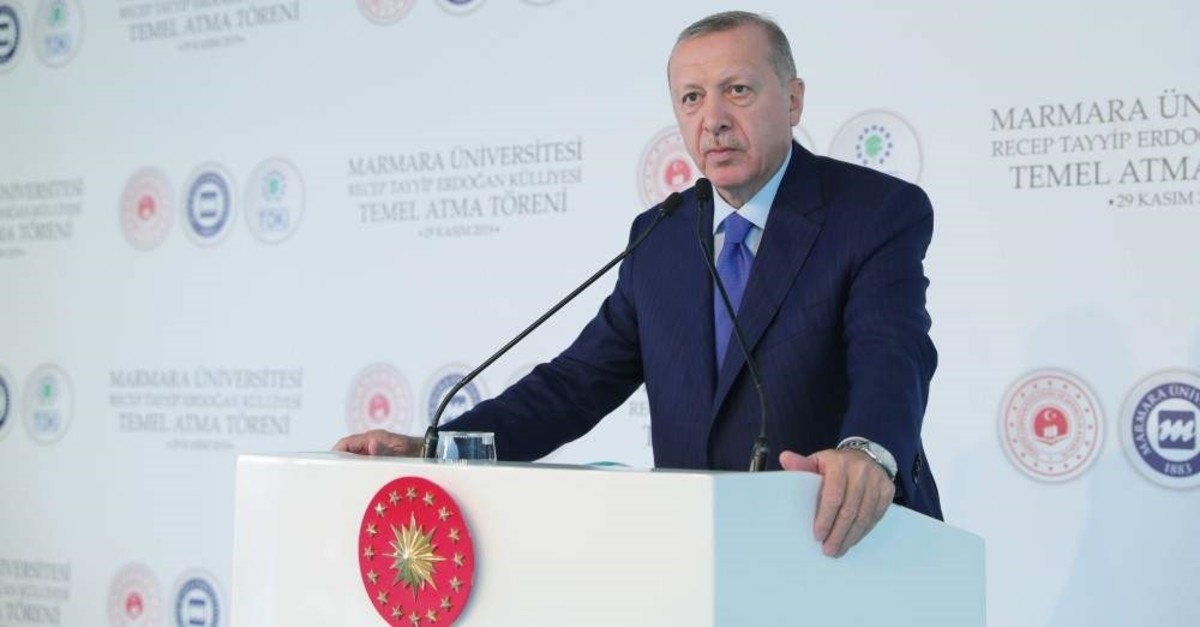 Turkey harshly criticizes French President Emmanuel Macron's statements undermining NATO's main principle, which is based on the solidarity of its allies

Turkey has criticized France's lack of collaboration in NATO, amid poor policy choices and growing strategic irrelevance. President Recep Tayyip Erdoğan slammed French President Emmanuel Macron's comments that Turkey should not expect solidarity from its allies regarding its operation in northern Syria.

"We do not know what France means for NATO but Turkey, with its second-largest army, is its most important member. No one should doubt that if it was not for Turkey, terrorists would head for Europe," Erdoğan stated on Friday.

Underlining that it is France itself that is trying to establish a presence in Syria, the president stated that France has no right to be there and that the regime also did not invite it. "Is it your place to decide whether to remove Turkey or not? Do you have the authority to decide this?" the president asked rhetorically.

Claiming a "brain death" of NATO, Macron said this was a necessary wake-up call for the EU. Ahead of next week's NATO summit in London, he also criticized Turkey and NATO Secretary-General Jens Stoltenberg in Paris on Thursday.

Macron should check his own head before declaring NATO "brain dead," Erdoğan said in rebuff of Macron, adding that fortunately there are sensible politicians in NATO and the EU.

Giving an exclusive interview to Daily Sabah in regards to NATO Summit, Presidential Communications Director Fahrettin Altun emphasized that Turkey's most basic expectation from the summit is that NATO allies stand by Turkey against terror threats to its security.

"Today, NATO faces many criticisms and is seen as ineffective in solving the alliance's problems. However overcoming these criticisms depends on the dedication and sincerity of the members. As a strategic member of NATO, Turkey will provide all kinds of assistance to the alliance in the face of joint struggles," Altun underlined.

Emphasizing the fact that the goal of Turkey's operation in Syria is to thwart the terror corridor that is trying to be established, Altun indicated that Turkey has no other hidden agenda in Syria or in any other country.

Altun also stated that during the leaders' summit of NATO in London, President Recep Tayyip Erdoğan will meet with European leaders from United Kingdom, Germany and France following Turkey's agreements with the U.S. and Russia regarding Northern Syria.

"Turkey does not believe that NATO is experiencing 'brain death' as some NATO member countries leaders claim. Turkey emphasizes that joint steps have to be taken regarding the rightful security concerns of every member country in the alliance. Thus we believe that in keeping with NATO's aims and principles it has to operate as an active mechanism facing security problems today. We think that it is possible to meet the reform and revision needs of NATO that have arose over time in the alliance with regard to the joint interests and security of member states. We call on all members of the strategic alliance to act sensibly, logically and coherently," Altun concluded.

Speaking to Daily Sabah, deputy head of NATO's Parliamentary Assembly Turkish delegation, Ahmet Berat Çonkar stated "Macron's statements are unfortunate and ignorant. This renders NATO's most basic principle, which is the solidarity of allies, meaningless. The allies should give the necessary reactions," continuing to stress that the issue of security and defense is sensitive, "before making any statements on such issues, one has to understand NATO's mission."

Çonkar also emphasized that Turkey has suffered great losses in the 30 years of PKK terror on its country and is now expecting the solidarity of its allies. "Turkey has the right to expect the same as when allies show solidarity toward other countries who are victims of terrorism. Until today, Turkey has always made the biggest sacrifices when there was a need. It has fulfilled all its responsibilities. As a country that has made such sacrifices, it is the right time for NATO to show that it stands with Turkey," Çonkar added.

Trump, as the alliance's de facto leader, has made defense spending a priority after years of defense cuts following the Cold War. He has been strongly critical of European countries' heavy reliance on the U.S. for their defense and the failure of some, most notably Germany, to hit a NATO target of spending 2% of national output on defense. "Peace in Europe, the post-INF [intermediate-range nuclear forces treaty] situation, the relationship with Russia, the Turkey issue – who's the enemy? So I say: as long as these questions are not resolved, let's not negotiate about cost-sharing and burden-sharing or this or the other," Macron had said.

Upcoming summit to be platform for substantial debates

It is also expected that the alliance will discuss the current debate on NATO's defense plans during next week's summit. Foreign Minister Mevlüt Çavuşoğlu highlighted on Thursday that

Turkey is not against the Baltic plan but NATO needs to act in a way that will alleviate the concerns of all allies.

Çavuşoğlu's comments came after Ankara's refusal of a NATO defense plan for the Baltics and Poland after the U.S. rejected a defense plan concerning Turkey, which recognizes the People's Protection Units (YPG) and PKK as national threats ahead of NATO's 70th-anniversary summit.

NATO has two defense plans, one of which is designed for the Baltic States and Poland, drawn up at their request after Russia annexed Crimea from Ukraine in 2014. The other is for Turkey regarding threats coming from the south.

These plans are ratified by the North Atlantic Council (NAC), updated every two years and published. If the defense plan concerning Turkey is published, it would mean the U.S. could be held legally responsible for supporting the terrorist organizations, according to the Turkish authorities.

"As Turkey, we expect the instability and conflicts surrounding Turkey, especially on its south, to be prioritized next week while Turkey's security is discussed equivalently. Fractures and disagreements within the alliance also need to be addressed. People undermining the alliance have to be warned and steps harming the structure of NATO have to be pointed out," Çonkar further stated.

Another statement regarding the summit in London when President Recep Tayyip Erdoğan, German Chancellor Angela Merkel, Macron and British Prime Minister Boris Johnson will come together, came from Germany on Friday. The statement made by deputy government spokesperson Ulrike Demmer, pointed out that the main topic on the agenda of the meeting would be Syria while it also added that Merkel would also meet U.S. President Donald Trump on Wednesday on the sidelines of the summit.