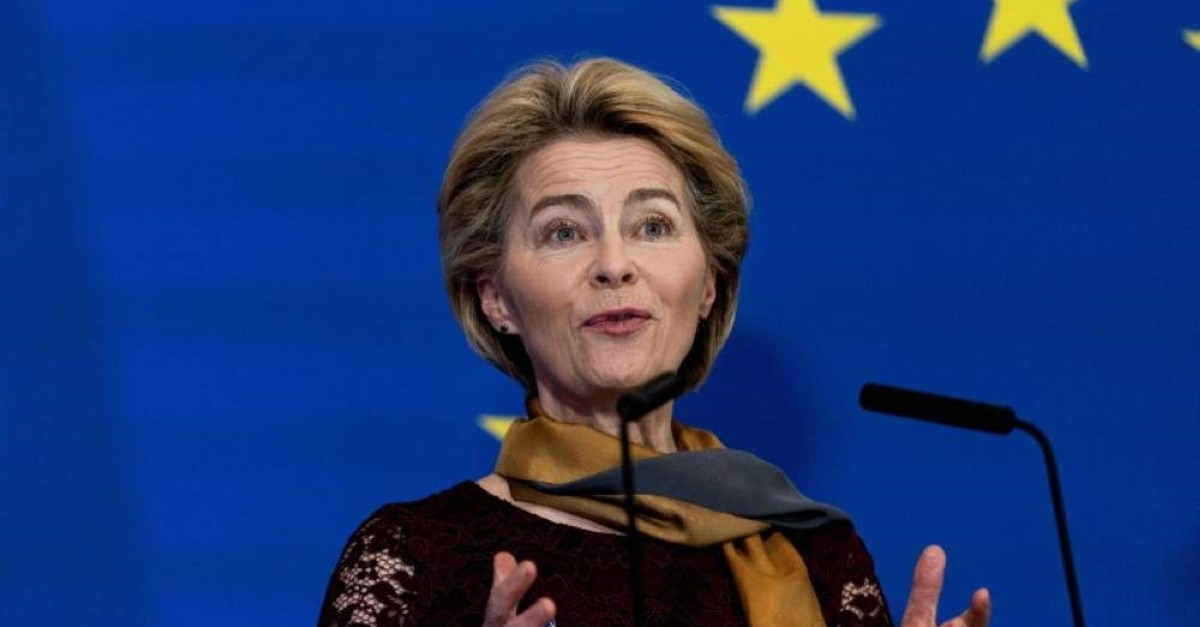 European Commission President Ursula von der Leyen attends a news conference at the House of European History in Brussels to celebrate the 10th anniversary of the Lisbon Treaty on Dec. 1, 2019. (AFP Photo)
by Daily Sabah with AA Dec 01, 2019 8:20 pm
The new president of the European Commission, Ursula von der Leyen, called President Recep Tayyip Erdoğan on Sunday on her first day in office.
The two discussed Turkey's accession to the EU, the March 2016 Turkey-EU agreement regarding support to the Syrian refugees in Turkey, and voluntary return of Syrians to the safe zone being established by the Turkish administration in northern Syria.
In a Twitter post, Von der Leyen said she started her first day in the office with courtesy phone calls to G7 and G20 members.
"To tackle global challenges effectively, we have to work together," she said.
Turkey and the EU signed a refugee deal in March 2016, which aimed to discourage irregular migration through the Aegean Sea by taking stricter measures against human traffickers and improving the conditions of nearly 3 million Syrian refugees in Turkey.
Turkey has established a 145-kilometer-long, 30-kilometer-deep safe zone in northern Syria, but continues to face threats from the PKK's Syrian offshoot, the People's Protection Units (YPG) terrorist group. Turkey wants to repatriate some 2 million Syrian refugees it is currently hosting to the zone after clearing it of terrorists.
Ankara has urged the international community to provide support so that favorable conditions can be established for the voluntary return of Syrian refugees to the safe zone.
In its more than 30-year terror campaign against Turkey, the PKK – listed as a terrorist organization by Turkey, the U.S. and the European Union – has been responsible for the deaths of over 40,000 people, including women, children, and infants.
Last Update: Dec 20, 2019 2:04 am
RELATED TOPICS