US Sen. Graham again pursues sanctions on Turkey over S-400s 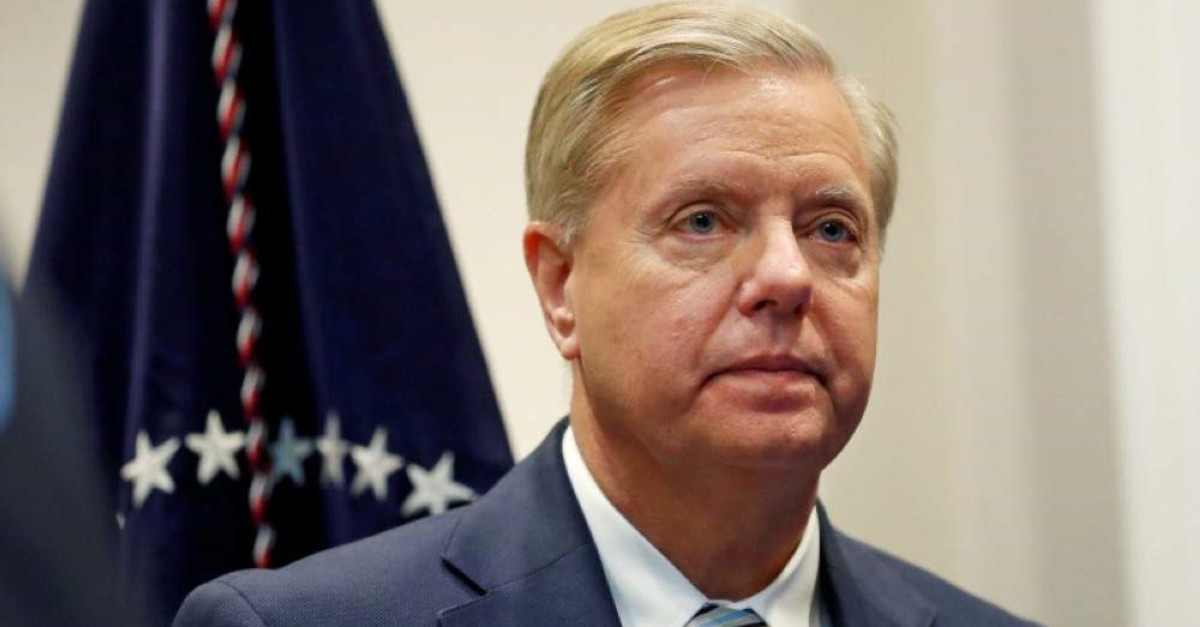 Sen. Lindsey Graham waits for U.S. President Donald Trump to speak at the White House in Washington, U.S. Nov. 14, 2018. (Reuters Photo)
by Daily Sabah with Reuters Dec 02, 2019 9:36 pm
Republican U.S. Sen. Lindsey Graham and Democratic Sen. Chris Van Hollen called on the Trump administration on Monday to impose sanctions on Turkey over its purchase of Russian S-400 missile defense system.
"The time for patience has long expired. It is time you applied the law," Van Hollen and Graham said in a letter to Secretary of State Mike Pompeo seen by Reuters. "Failure to do so is sending a terrible signal to other countries that they can flout U.S. laws without consequence," they said.
Ankara and Washington have been at loggerheads over NATO ally Turkey's purchase of the Russian S-400 system, which Washington says is not compatible with NATO defenses and poses a threat to its F-35 stealth fighter jets, which Lockheed Martin Corp is developing.
Turkey, however, emphasized that the S-400 would not be integrated into NATO systems and would pose no threat to the alliance, rejecting calls to back out of the deal. Ankara also stressed it was the U.S.' refusal to sell it Patriots that led it to need to seek out other sellers, adding that Russia offered it a better deal, including technology transfers.
The acquisition of the Russian system prompted the Trump administration in July to remove Turkey from the F-35 fifth-generation joint strike fighter program, in which Ankara was formerly a major buyer and manufacturer. Tensions deepened after that month, in which Turkey received its first shipment of the Russian equipment.
Last month, the head of Russia's state arms exporter, Rosoboronexport, was cited as saying that Moscow hoped to seal a deal to supply Turkey with more S-400 missile systems in the first half of 2020.
U.S. President Donald Trump's administration has held off on imposing sanctions despite Trump signing a sweeping sanctions law, known as CAATSA, in 2017 mandating them for countries that do business with Russia's military.
Some U.S. lawmakers, including Graham, ramped up their efforts to impose measures against Ankara in October, when Turkey launched Operation Peace Spring to clear People's Protection Units (YPG) terrorists from northern Syria.
Normally an ardent defender of fellow-Republican Trump, Graham and some others in his party have been harshly critical of President Trump's decision to withdraw troops from northeastern Syria ahead of the Turkish counterterrorism operation.
Graham was one of the loudest voices protesting Turkey's anti-terror operation, despite months earlier saying the U.S. had created the problem in northern Syria by arming the YPG, which is the Syrian affiliate of the PKK terror organization.
In February, the senator had admitted that there was evidence of a "strong link" between the YPG and the PKK.
Graham held a news conference in February in Ankara and told reporters that there was sufficient evidence to prove that both organizations had links, adding that former U.S. President Barack Obama "created a nightmare" for Turkey by arming elements of the YPG that are "clearly tied to the PKK."
"I knew what arming the YPG/PYD meant for Turkey when I learned about it," Graham said.
He said he promised Turkish President Recep Tayyip Erdoğan he would try his best "to fix the problem" the U.S. created for Turkey.
However, just a few months later, Graham is now championing efforts to impose sanctions against NATO ally Turkey, whether over its counterterrorism efforts or its defense deals with Russia.
Last Update: Dec 20, 2019 2:06 am
RELATED TOPICS