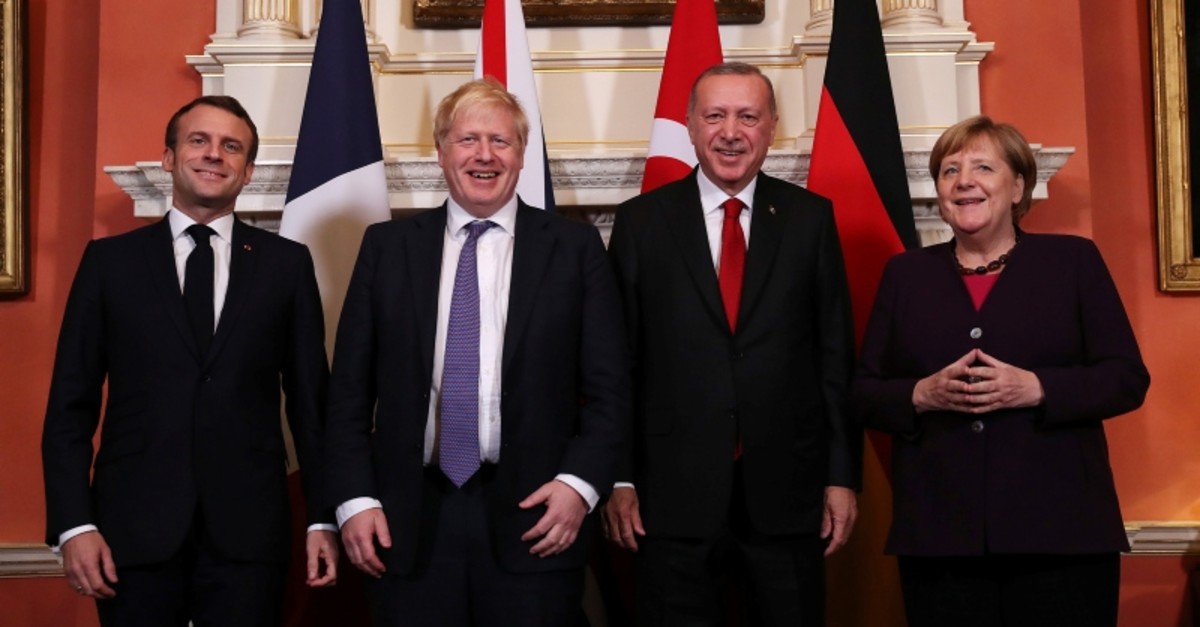 France's President Emmanuel Macron, Britain's Prime Minister Boris Johnson, Turkish President Tayyip Erdogan and German Chancellor Angela Merkel pose as they meet at Downing Street ahead of the NATO summit in London, Britain, December 3, 2019.
by Daily Sabah with AA Dec 03, 2019 9:04 pm
President Recep Tayyip Erdoğan convened with the leaders of France, Germany and the U.K. in London on Tuesday, ahead of a NATO summit. Leaders praised the summit, with German chancellor Angela Merkel reporting that “it was a productive and beneficial."
The meeting, which took place at 10 Downing Street and was joined by President Erdoğan, his French counterpart Emmanuel Macron, German Chancellor Merkel and U.K. Prime Minister Boris Johnson lasted about an hour. President Erdoğan said after the summit that the discussion “went well.”
The quartet discussed the Syrian crisis, while touching upon Turkey's operation targeting PKK elements in northern Syria, namely the group's Syrian wing, the YPG/PYD terrrorist organization.
"Developments regarding Operation Peace Spring will be looked at," Erdoğan had said ahead of the meeting, referring to Turkey's anti-terrorist operation in northern Syria, which launched in October.
"Since these countries are among the coalition forces, we will discuss the extent to which they have fulfilled their duties within the coalition and how they can support the plans and projects we prepared," he added.
"We'll also get the chance to listen to their expectations from us and I hope we will have concluded the meeting in good faith," he said.
On Oct. 9, Turkey launched Operation Peace Spring to eliminate YPG/PKK terrorists from northern Syria east of the Euphrates River in order to secure Turkey's borders, aid in the safe return of Syrian refugees, and ensure Syria's territorial integrity.
As agreed in two separate deals with both the U.S. and Russia, Turkey has paused the operation to allow for the withdrawal of YPG/PKK terrorists from the proposed safe zone inside Syria.
Ankara wishes the YPG/PKK terrorist organization to withdraw from the region so a safe zone can be created to pave the way for the safe return of some 2 million refugees from Turkey.
In its more than 30-year terror campaign against Turkey, the PKK -- listed as a terrorist organization by Turkey, the U.S. and the European Union -- has been responsible for the deaths of nearly 40,000 people, including women, children and infants.
President Erdoğan will also attend two separate receptions attended by all NATO leaders on Tuesday evening. The receptions will be hosted at Buckingham Palace by Queen Elizabeth and later at 10 Downing Street by Prime Minister Johnson.
Last Update: Dec 20, 2019 2:07 am
RELATED TOPICS