NATO leader's summit revolves around Turkey amid challenges to alliance 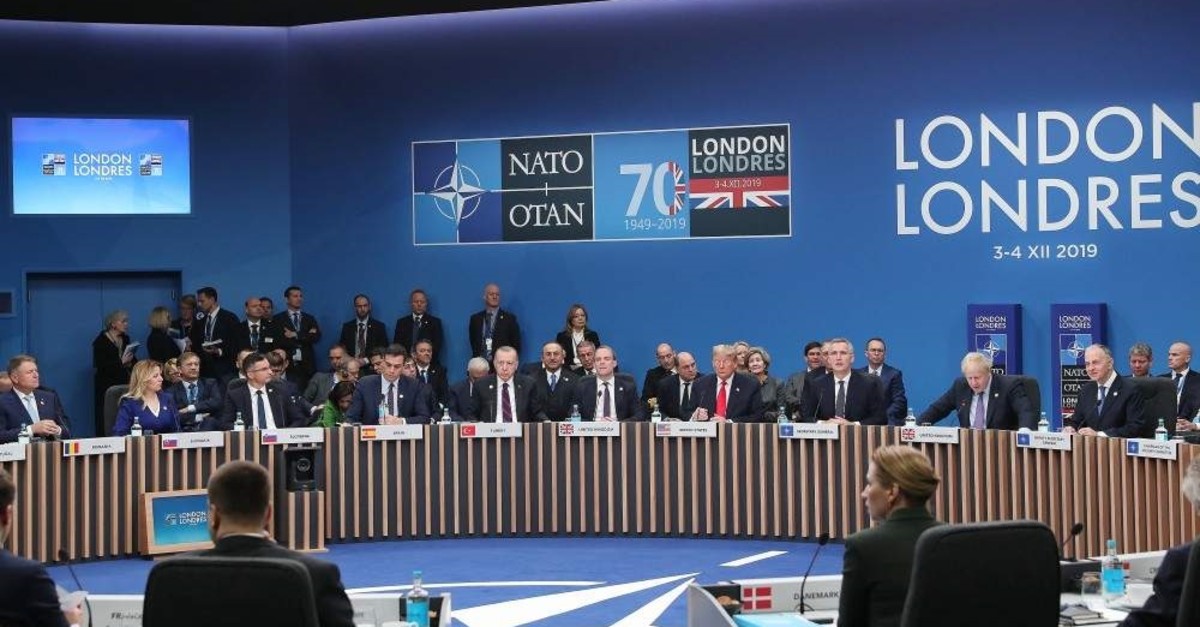 As leaders gathered to discuss the strategic cooperation alliance, Turkey stands as a focal point with its leading role in the trans-Atlantic alliance

This year’s NATO summit in honor of the alliance’s 70th anniversary has been a critical event, amid disputes between alliance members and Turkey over issues ranging from the situation in Syria to recently signed agreements with Libya. Although some leaders are questioning the raison d’etre of the alliance, Turkey is committed in its support and is determined to pursue reforms for the survival of NATO.

"Terrorism in all its forms and manifestations remains a persistent threat to us all," NATO announced in a joint statement published after the summit.

The alliance also reaffirmed their "solemn commitment as enshrined in Article 5 of the Washington Treaty, that an attack against one Ally shall be considered an attack against us all," referring to NATO's founding document. The NATO leaders will come together again in 2021. Leaders say they have agreed to set up a committee of experts to analyze political decision-making.

“Our critics have dared to question our national security concerns and our NATO membership. In the face of most serious challenges, we have been a top contributing partner in NATO for our common security. And, we aren’t planning to compromise on our national security anytime soon,” Presidential Communications Director Fahrettin Altun wrote Wednesday on Twitter.

As NATO has been adapting to the changing global security environment, the alliance has faced new challenges and debates about its future and strategic system, with some countries even questioning the level of political cooperation in the alliance.

“I think Turkey is at the center of attention for several reasons, mainly related to a sort of 'fatigue' in understanding Ankara's interests and legitimate concerns. More than the Turkish effort as a valid contributor to NATO security against the threats coming from the east and south of the alliance, Turkey seems to be judged for its assumed lacks toward the alliance and in general toward the West,” Valeria Giannotta, an expert in Turkish politics and international relations told Daily Sabah, adding that there are serious misperception and bias about Turkey.

Turkey has recently been at odds with the alliance due to its cross-border military operation on northern Syria to remove terrorists and secure its southern border. The operation was met by heavy criticism of several NATO member countries, including France, as French President Emmanuel Macron said Turkey “should not be expecting solidarity” from its allies.
The French president’s remarks came after he openly criticized NATO, saying it is experiencing “brain death.”
“Turkey has been acknowledged as a valuable partner both by [Donald] Trump and Stoltenberg. Merkel praises Turkey's effort on the refugee issue. Those are the glue points keeping the partners together. What is important is that diplomacy is back on track. Tensions will persist in certain points but I believe we had already experienced the lowest point of the relations,” Giannotta added.

Speaking to Daily Sabah, Enes Bayraklı, director of European Studies at the Foundation for Political, Economic and Social Research (SETA), said: “The fact that the summit is concentrating on Turkey, shows Turkey’s importance within NATO. Turkey was key for security during the Cold War as it is today and is maybe the most significant actor within the alliance following the U.S.”
Erdoğan, Trump meet on the sidelines of NATO summit in London

"The Syria safe zone deal is working out very well, I give a lot of credit to Turkey for that," Trump said.

While topics such as the establishment of a safe zone in Syria and Turkey's fight against terrorism were on the leader’s agenda, Trump praised Turkey on the first day of the summit, saying: “When we got al-Baghdadi, Turkey was very helpful. We flew over areas that were controlled by Turkey and the Turkish military was absolutely very supportive actually. Turkey could not have been nicer, could not have been more supportive.” Adding that Turkey bought the Russian missile system because the Obama administration refused to sell the Patriots, Trump stated that both parties are still discussing it.

Before the summit, Trump showed his support for Erdoğan, indicating that he likes “good NATO member Turkey” and gets along with the country's president. Despite all recent disputes, Turkey's relations with the U.S. seem to be back on track thanks to the efforts of Erdoğan and Trump to enhance cooperation.

"Turkey has been enormously important in our joint efforts to fight ISIS [Daesh]," Stoltenberg said Tuesday.

In Operation Euphrates Shield alone, Turkey eliminated over 3,000 Daesh members. This number increases to 4,000 if other operations are included.

Turkey has been the international frontrunner in the fight against terrorism. Turkey is also among the top five NATO allies giving sustainable support to the alliance mission through 1,100 personnel. Stoltenberg further added that the issue of how NATO should designate the YPG was not discussed at the summit.

“Turkey’s security concerns had been ignored for a long time, however, with the steps Turkey has taken, it has forced them to be paid regard to,” Bayraklı added, saying that terrorism is NATO’s modern-day challenge. “Yet there is no consensus over its [terrorism] attributions. Those that threaten Turkey are not seen as threats. Some members of NATO have to quit hypocrisy and seek consensus as NATO is and has been a significant international organization,” he continued.

Turkey repeatedly voiced that what happens across Turkey’s southern border, which is also NATO’s border, concerns Europe and all other members as well and that terrorism, conflict and migration threaten the stability of all NATO countries.

President Recep Tayyip Erdoğan convened with the leaders of France, Germany and the U.K. in London on Tuesday evening, ahead of the formal talks of the NATO summit. Leaders praised the quadrilateral meeting, with German Chancellor Angela Merkel reporting that "it was productive and useful."

The meeting, which took place at 10 Downing Street and was joined by Erdoğan, Macron, Merkel and U.K. Prime Minister Boris Johnson, lasted about an hour. President Erdoğan said after the summit that the discussion "went well." The quartet discussed the Syrian crisis while touching upon Turkey's operation targeting PKK elements in northern Syria, namely the group's Syrian wing, the People's Protection Units (YPG) terrorist organization. During the meeting, Erdoğan presented a book about the country's role in NATO to the leaders, "The Powerful Member of the Strategic Alliance," published by the Turkish Communications Directorate.

Asked about Turkey's anti-terror Operation Peace Spring in northern Syria, Johnson said: "We had a very good discussion about that yesterday afternoon. And clearly, it's very important that the alliance stays together. There is far more that unites us than divides us. I think one thing every leader here is absolutely resolved on and that is the vital importance of NATO for our collective security.”

Giannotta said: “I believe there will not be space for arguing on 'Turkey out of NATO.' Turkey will be in NATO, there will be some sort of tension due to what I mentioned before, but Turkey's status will not change. What we witnessed yesterday night, however, after the quadripartite meeting, is a sort of distension of tones and a kind of isolation of (France's) extreme stance in the current narratives."
Macron also praised Tuesday's quartet meeting with Erdoğan, saying it helped to clarify Turkey's goals in northern Syria.

Following the summit, NATO Secretary-General Jens Stoltenberg announced that Turkey approved the NATO defense plan for the Baltics and that it did not demand anything in return.

Ankara had previously refused a NATO defense plan for the Baltics and Poland after the U.S. rejected a defense plan concerning Turkey, which recognizes the YPG and PKK as national threats.

Stoltenberg yesterday rejected French criticism that the military alliance is suffering from "brain death" and insisted that the organization is adapting to modern challenges.

"NATO is agile, NATO is active, NATO is adapting," Stoltenberg said before chairing a meeting between the alliance leaders at a luxury hotel and golf resort outside London.

“Unity and solidarity are the two pillars of NATO. Deeds speak louder than words. The allies must respect and protect each other. With the second-largest army in the alliance, Turkey expects allies to stand with it against all forms of terrorism, including the PKK, Daesh and FETÖ (Gülenist Terror Group),” Presidential Spokesperson İbrahim Kalın wrote yesterday on Twitter.

A commitment of 67 years

A member of the bloc since 1952, Turkey boasts NATO's second-largest army after the U.S. With about 90 million euros (nearly $100 million), Turkey is also currently one of the five countries that contribute most to NATO missions and operations using advanced technology on land, sea and air.

Speaking last month to French daily Le Figaro, Stoltenberg stressed Turkey’s importance “Turkey is very important for NATO. To understand this, (we) need to look at the map and examine the geostrategic situation in Turkey.”

Turkey has fulfilled its responsibilities to help the alliance achieve its goals of global peace, tranquility and security thanks to its extensive military capabilities, historical background and cultural relations.