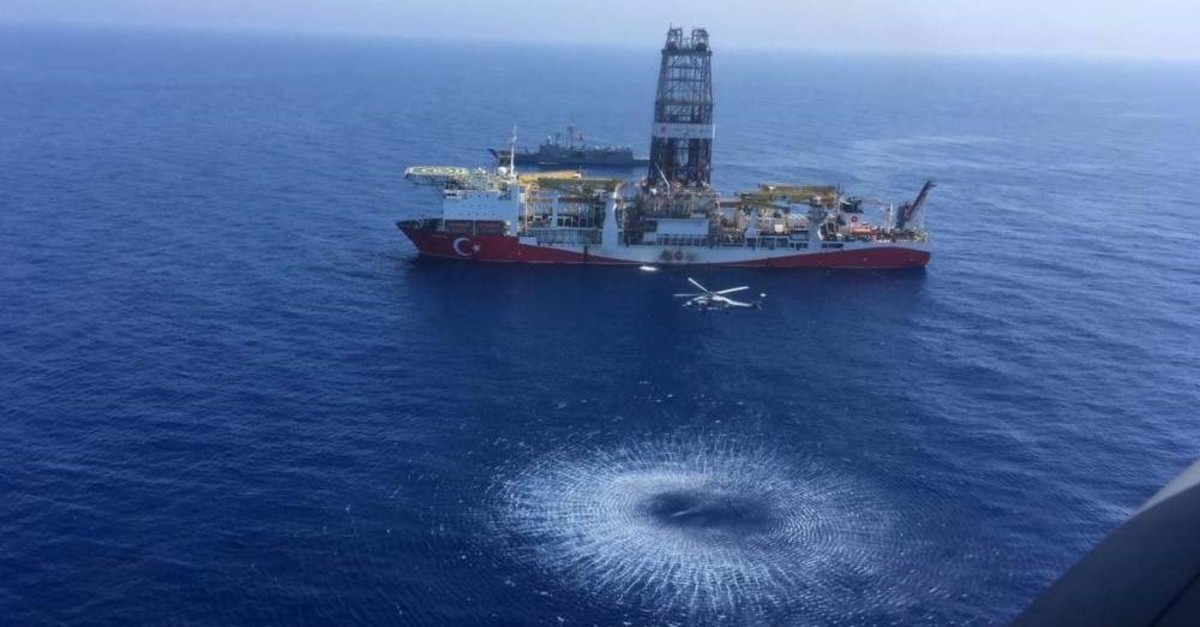 Turkey, as a guarantor nation for the Turkish Republic of Northern Cyprus (TRNC), is currently carrying out hydrocarbon exploration activities in the Eastern Mediterranean with two drilling vessels, Dec. 3, 2019. (DHA)
by Daily Sabah with Agencies Dec 05, 2019 3:38 pm

President Erdoğan said Greece, Egypt, the Greek Cypriot Administration and Israel were disturbed by Turkey's efforts to secure its sovereign rights in the Eastern Mediterranean

The Turkey-Libya maritime deal to secure Ankara's rights in the Eastern Mediterranean has disturbed some regional actors who make baseless claims to the area's resources, President Recep Tayyip Erdoğan said Thursday.
Speaking to journalists accompanying him during his visit to London for the NATO summit, Erdoğan said that the Libya agreement signed with the official government was submitted to the Parliament and the process is going on, after which the agreement will come into force.
“But the other side is disturbed. Naturally, those who claim rights to things, for which they have none, are disturbed by such a situation. Particularly Greece, Egypt, the Greek Cypriot Administration of southern Cyprus and Israel are troubled, while they also provoke Europe,” Erdoğan said, adding that France and Germany also touched upon the issue during Tuesday’s quartet meeting in London.
Explaining that France did not change its stance even after the necessary explanations were made, Erdoğan said “I told him (Macron), ‘Why are you insisting on this issue? Do you have any rights here? Turkey, Greece and the U.K. are the guarantors here. We use our guarantor rights. We have kin there – the Turkish Republic of Northern Cyprus (TRNC).”
The TRNC, established in 1983 on the northern third of the island, is only recognized by Turkey and faces a longstanding embargo in commerce, transportation and culture.
On the other hand, the Greek Cypriot Administration enjoys recognition by the international community as the Republic of Cyprus, established in 1960, and is a member of the EU. The president once again voiced his determination to pursue and protect the rights of the TRNC, saying, “We will protect the law and rights of our kin here.”
The president further indicated that some are putting forth inaccurate statements claiming that Turkey is violating international maritime law. “Turkey knows well what maritime law is and where international law comes into existence. As long as Libya’s official government stands upright, this step will be carried out," he said.
Meanwhile, the agreement with Libya was approved by the Grand National Assembly’s (TBMM) Foreign Affairs Commission on Thursday, in a meeting led by the Commission Chair Volkan Bozkır.

Turkey and Libya signed a deal last week after a meeting between Erdoğan and the head of the Presidential Council of Libya's U.N.-backed Government of National Accord, Fayez Al Sarraj, in Istanbul. The deal enabled Turkey to secure its rights in the Mediterranean while preventing any fait accompli by other regional states.

On Nov. 27, the Turkish Communications Directorate announced that Turkey and Libya had signed two memorandums of understanding, one of which was the Restriction of Marine Jurisdictions agreement that determined a portion of Turkey's maritime jurisdiction in the region.

In a statement Sunday, the Turkish Foreign Ministry said, "Through this agreement with Libya, the two countries have clearly manifested their intention not to allow any fait accompli."

According to the Foreign Ministry, the agreement complies with international law, including the relevant articles pertaining to the U.N. Convention on the Law of the Sea.

However, Greece, one of the main regional actors, did not welcome the deal and regarded it as a violation of its rights, although international law deems otherwise.

Greece's foreign minister on Monday threatened to expel the Libyan ambassador to Athens unless provided with details of the agreement reached with Ankara.

Another statement on the issue came from Greek Prime Minister Kyriakos Mitsotakis on Wednesday. Turkey and Greece agreed to continue bilateral discussions on confidence-building measures, Mitsotakis said, referring to the ongoing disagreements between the two sides over the Eastern Mediterranean, following his meeting with Erdoğan in London on the sidelines of a NATO leaders’ summit.

“The disagreements between both sides were recorded. The two sides, however, agreed to continue discussions on confidence-building measures," Mitsotakis said in a statement, adding that differences between Greece and neighbor Turkey “will continue to exist.”

Mitsotakis said he had “open talks” with Erdoğan on the sidelines of the NATO summit and that both “noted disagreements.”

"I want to reassure the Greek people that difficulties with Turkey existed (in the past), exist now and will continue to exist. But I assess that, provided the two sides show goodwill, these will be overcome," he added.

The two NATO allies have disputes over the rights to deep-sea energy resources, among others, arising from decades of regional rivalry.

Greece said Wednesday it opposed the accord reached by Turkey and Libya to define their maritime boundaries but said Athens and Ankara were committed to talks on confidence-building measures.

Meanwhile, the Greek Cypriot administration has petitioned the International Court of Justice at The Hague to safeguard its offshore mineral rights, its president said Thursday, in response to Turkey’s initiatives in the region.

"Our recourse to The Hague has that very purpose," he told journalists in Nicosia.

Turkey, as a guarantor nation for the TRNC, is currently carrying out hydrocarbon exploration activities in the Eastern Mediterranean with two drilling vessels, Fatih and Yavuz, along with its seismic vessels Oruç Reis and Barbaros Hayrettin Pasa, in the same region.

Turkey has consistently contested the Greek Cypriot Administration's unilateral drilling in the Eastern Mediterranean, asserting that the TRNC also has rights to the resources in the area.

The decades since have seen several attempts to resolve the Cyprus dispute, all failing. The latest one, held with the participation of the guarantor countries – Turkey, Greece, and the U.K. – came to an end without any progress in 2017 in Switzerland.