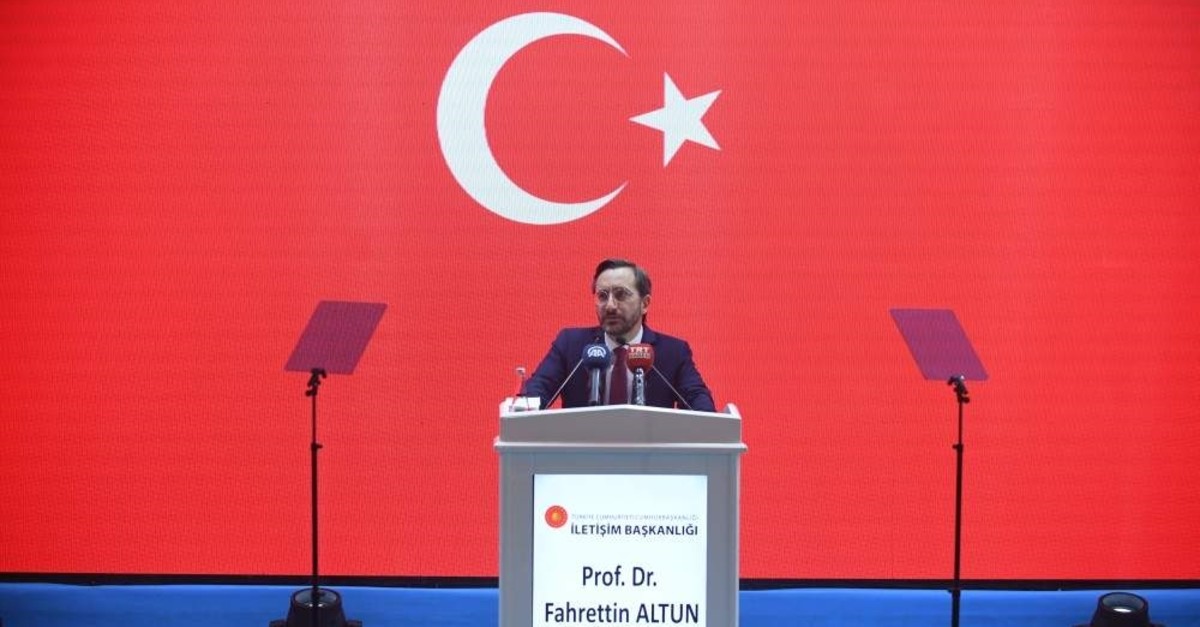 | AA Photo
by Daily Sabah with AA Dec 08, 2019 11:12 am
Turkey has been preparing to boost efforts to fight a defamation campaign waged against the country. One of the latest initiatives of the Directorate of Communications has been to create a website about the baseless claims on the 1915 events.
The new website “1915.gov.tr” aims to inform the public about the events from the year 1915 with a comprehensive and objective historical narrative. Turkey objects to the presentation of the 1915 incidents as a "genocide," rather referring to it as a tragedy in which both Turks and Armenians suffered casualties amidst the throws of World War I. Ankara has repeatedly proposed the creation of a joint commission of historians from Turkey and Armenia under the supervision of international experts charged with examining the issue.
“This website will respond to Armenian genocide slander used against our country at every possible opportunity in the international area, by putting historical information and data to the fore,” said Presidential Communications Director Fahrettin Altun on Saturday during a training program in the coastal province of Antalya.
He also stated that such an issue ought not to be used as a political tool, adding that the new initiative would contribute to efforts to depoliticize the historical narrative and to reach accurate historical findings.
In addition to presenting the events of 1915 in a comprehensive and objective manner, the website also includes official statements about the issue, including President Recep Tayyip Erdoğan’s letter to Armenia’s former President Robert Kocharyan to establish a joint commission of historians to analyze the 1915 events and the president's messages to the Armenian Patriarchate on the commemoration ceremonies on April 24.
Another topic the site offers information on is the ASALA terror group, whose attacks targetted Turkish diplomats in a spat of violent incidents throughout the 1970s and 1980s.
Founded in 1975 in Beirut during the Lebanese Civil War, ASALA was responsible for hundreds of bloody terror acts.
Though the group was formed in 1975, the first killing of a diplomat and his deputy came on Jan. 27, 1973, when group member Gourgen Yanikian killed Turkey's consul general in Los Angeles, Mehmet Baydar, and his aide Bahadır Demir. A total of three diplomats were killed between 1973 and 1978, after which Turkish public servants abroad became targets for Armenian terrorist organizations such as ASALA and the self-declared Justice Commandoes for Armenian Genocide group.
Armenian terrorist attacks intensified from 1980 to 1983. In these years, 80% of recorded attacks (580 of the 699) occurred. The terrorist attacks ceased in 1986, according to a study on Armenian terrorism.
In 1915, the Ottoman Empire relocated Armenians in eastern Anatolia following revolts in which some sided with invading Russian forces. There were many Armenian casualties during this relocation process.
Armenia has demanded an apology and compensation, while Turkey has officially refuted Armenian allegations over the incidents saying that, although Armenians died during the relocations, many Turks also lost their lives in attacks carried out by Armenian gangs in Anatolia. The Turkish government has repeatedly called on historians to study Ottoman archives pertaining to the era in order to uncover what actually happened between the Ottoman government and its Armenian citizens.
Rebuffing the "genocide" allegations, Turkey has officially acknowledged past experiences as a great tragedy in which both parties suffered heavy casualties, including hundreds of Muslim Turks.
Stronger fight against dark propaganda
In addition to his statements about the 1915 events, Altun also said that Turkey will step up its efforts against dark propaganda targeting the country. "We should wage a stronger fight against dark propaganda," Altun said.
He stressed that Turkey's negotiating power in the international arena had been growing as a result of its growing regional strength. "Our aim is to conduct high-quality, valuable work to equal to the rise of our country, which has a voice in the region and in the world," Altun added.
He underlined Turkey's successes in the fight against terrorism and efforts to show the dark, bloody face of terrorist groups to the world.
"We put up fierce struggles in the field simultaneously against terrorist groups," he said, citing Turkey's effort against the PKK, Daesh and the Gülenist Terror Group (FETÖ). FETÖ was behind the 2016 defeated coup in Turkey.
"In this sense, Turkey's Operation Peace Spring has just shown that despite all attempts to besiege us, we can establish our own game and overthrow geopolitical engineering projects of foreign actors similar to ones from a century ago," he added.
Turkey launched Operation Peace Spring on Oct. 9 to eliminate terrorist PKK's Syrian offshoot the People's Protection Units (YPG) from northern Syria east of the Euphrates River in order to secure Turkey's borders, aid in the safe return of Syrian refugees and ensure Syria's territorial integrity.
Under two separate deals with the U.S. and Russia, Turkey paused the operation to allow the withdrawal of YPG terrorists from a planned Syrian safe zone. Ankara wants the YPG terrorists to withdraw from the region so that a safe zone can be created to pave the way for the safe return of some 2 million refugees.
In its more than 30-year terror campaign against Turkey, the PKK, listed as a terrorist organization by Turkey, the U.S. and the European Union, has been responsible for the deaths of nearly 40,000 people, including women, children and infants. The YPG is the PKK's Syrian offshoot.
FETÖ and its U.S.-based leader Fetullah Gülen orchestrated the defeated coup of July 15, 2016, which left 251 people killed and nearly 2,200 injured. FETÖ was also behind a long-running campaign to overthrow the state through the infiltration of Turkish institutions, particularly the military, police and judiciary.
Last Update: Dec 20, 2019 2:13 am
RELATED TOPICS