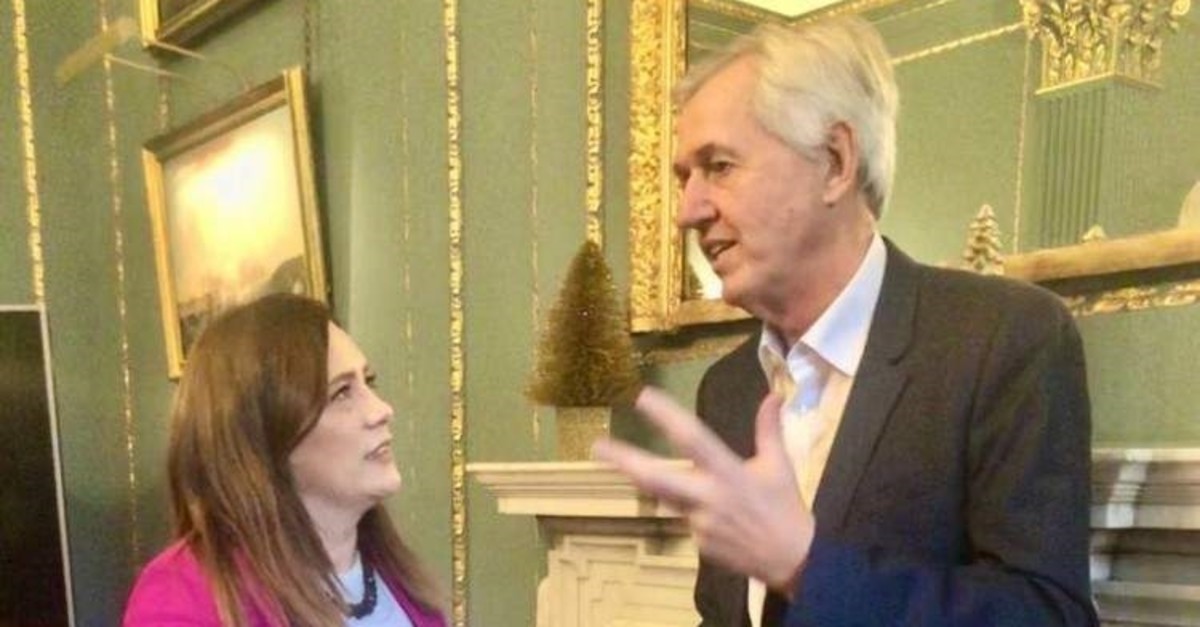 Daily Sabah Ankara Representative Nur u00d6zkan Erbay (L) with UK Conservative Party politician Nicholas de Bois on Dec. 4, 2019 in London.
by Nur Özkan Erbay Dec 08, 2019 4:23 pm
The existing relation between Turkey and the U.K. will have much greater potential in the future, especially post-Brexit when the country will be able to strike a new trade deal with Turkey, said Geoffrey Nicholas de Bois, a politician from the U.K.'s governing Conservative Party in a conversation with the Daily Sabah on Wednesday.
“I think on trade, specifically, the Conservative government has made it perfectly clear that when possible we want to strike quick and effective free trade agreements because Turkey is currently in a limited customs union, it means sadly until we leave the EU we cannot start actual negotiations with Turkey. We have to respect the existing treaties with the EU,” Bois stated, explaining that negotiations between the two countries could not start until the U.K. left the European Union, with the latest government goal for this set as Jan. 31.
Bois was former Prime Minister John Major’s constituency conservative association vice chairman for Huntingdon between 1992-1997 and later served as Member of Parliament (MP) for Enfield North between 2010-2015. Between July-November 2017 he served as chief-of-staff under Dominic Raab in the latter's short-standing role as Secretary of State for Exiting the European Union.
Bois recalled that David Cameron’s first international visit was to Turkey. Furthermore, when Theresa May succeeded him in 2015, her first trip to meet President Trump was followed by a direct flight to Ankara to meet with President Erdoğan. “I am absolutely clear that the hard work done by the Conservatives since 2010 until now, with the president incumbent and I hope next prime minister, Boris Johnson, will continue to build both a trade, a strategic relationship and a cultural relationship with Turkey and I think it would be good for Turkey and good for the U.K.,” Bois added.
According to Bois, the U.K. has a trade deficit with Turkey. Turkey sells more to the U.K. than the U.K. to Turkey. The U.K. is Turkey’s second-largest export market after Germany. “So that shows that there is already a vibrant relationship, the question is how we can accelerate that trade. I have always argued that Turkey, economically, is a huge prospect for the U.K. economy for so many reasons. Unlike the U.K., your population – half of it is under 30 I think – it is phenomenal, it is a growing middle class which are consumers,” Bois said, adding that since reforms took place after the banking financial crisis in Turkey, effective structural reforms had been put in place.
“We can only improve the bilateral trade figure of $10 billion, it can only go up. It has to be a key target for our exporters because of the demographics of Turkey,” Bois said while also mentioning that the U.K. envisaged reenergizing the existing relationship after the elections with Brexit in mind, and that new political momentum, more trade delegations to look beyond just military and defense; to look at healthcare, infrastructure, power generation, information technologies, creative industries should be introduced.
Adding that striking a trade deal with Turkey had to be a priority for the U.K. and that a grand Turkish-speaking community existed in the U.K., Bois continued “Many have come here as British citizens of Turkish origin. If we harness the power of the British-Turkish diaspora who are here, that is our bridge to building strong economic ties. There is a huge difference from any other diaspora, it is not just a transactional relationship, what I have noticed is that they [Turkish people] also place high value on knowledge-sharing, the relationship that exists.”
Bois claims that the last three Conservative prime ministers had bolstered the Turkish-British relationship, not to mention Greg Hands, the former trade minister, who speaks Turkish. Bois stressed, however, that despite successful lobbying, Britain’s political scene could be doing more. Furthermore, Bois also underlined that Turkey, as a key NATO member, has security concerns regarding terrorism that have to be taken into consideration.
Quoting current Prime Minister Johnson as having said “there is more that unites us than divides us,” Bois added: “That shows a willingness to understand. We all know that we sometimes do not recognize some of the huge difficulties and challenges Turkey has faced from terrorist organizations.”
Speaking on Turkey-EU relations, Bois said “In the past, I always felt that one of the mistakes the EU made was to push Turkey away. But Britain was 100% behind Turkish membership, we were its strongest advocate. Yes, there are problems, but what we have to find is a common ground. The customs union is now working against the economic interest of Turkey because the customs union is very one-sided, you don’t really have a say in negotiations at the table.”
Turkey is the only non-EU country that has had a customs union agreement with the union, which was inked in 1966. In its Dec. 21, 2016 assessment, the EU Commission proposed a redrawing up of the current deal, which only covers a limited range of industrial products and excludes agriculture, public procurement and services.
According to data from the Turkish Statistical Institute (TurkStat), Turkey's exports to the 28-country bloc totaled $62 billion while its imports were recorded at $50 billion. In 2018, Turkey's sales of goods and products to the EU were calculated at $84 billion and its purchase of European goods came at $81 billion.
Last Update: Dec 20, 2019 2:14 am
RELATED TOPICS