US seeks clarification on Turkey's warning over air bases 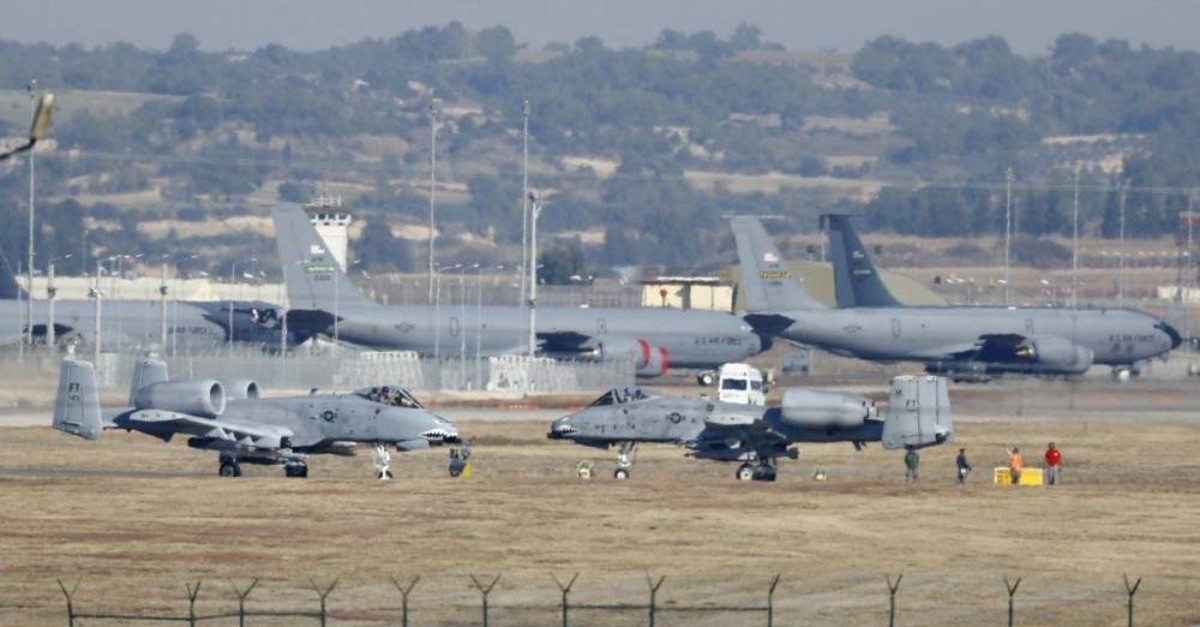 | Reuters Photo
by daily sabah
Dec 17, 2019 9:38 am
U.S. Defense Secretary Mark Esper on Monday said he needed to speak with his Turkish counterpart to understand how serious Ankara was about shutting down two strategic airbases used by U.S. troops in southeastern Turkey. The defense secretary’s statements came after President Recep Tayyip Erdoğan warned Sunday that Turkey might close Incirlik Air Base and Kürecik Radar Station in response to threats of U.S. sanctions and a separate U.S. Senate resolution that recognized the events of 1915 as an "Armenian genocide."
"It has not been brought up to me before. The first I heard of it was reading it in the papers as you just mentioned and so I need to talk to my defense counterpart to understand what they really mean and how serious they are," Esper told reporters.
Incirlik Air Base is located in the southeastern city of Adana and has been a key base for U.S. operations in the Middle East, most recently utilized in mobilizing forces against the Daesh terror group in Syria and Iraq. Kürecik, located further north, meanwhile, is a key NATO early-warning missile detection base.
"If the Turks are serious about this, I mean, they are a sovereign nation to begin with ... they have the inherent right to house or not to house NATO bases or foreign troops," Esper said on a plane as he flew back from Belgium, where he had attended the 75th anniversary of the Battle of the Bulge. "I think this is an alliance matter, it's about their commitment to the alliance, if indeed they are serious about what they are saying," Esper added, saying that it needed to be discussed by NATO.
Esper also noted he was disappointed by the direction Ankara seems to have been taking, moving away from NATO and getting closer to Russia.
Last week, the U.S. Senate unanimously passed the "Armenian genocide" bill, a historic move that infuriated Turkey and dealt a blow to the already problematic ties between Ankara and Washington.
The U.S. Congress has been united in its opposition to Turkey's recent policy actions. Republican senators have been incensed with Turkey's purchase of the Russian S-400 missile system, which the U.S. says poses a threat to its F-35 fighter jets and cannot be integrated into NATO defenses.
They have also moved to punish Turkey over its Operation Peace Spring in northern Syria. A U.S. Senate committee backed legislation Wednesday to impose sanctions on Turkey, pushing U.S. President Donald Trump to take a harder line on the issue.
Turkey closed Incirlik Air Base for three years beginning in 1975, leaving it only open for use by NATO. The base is thought to be essential to the U.S. due to its proximity to Iran, the Arabian Peninsula and Russia, all of which are of critical significance for the U.S.
"If necessary, we will have a discussion with our delegations and we may close down Incirlik and Kürecik," Erdoğan said Sunday in an interview with private news broadcaster, A Haber. "If they threaten us with the implementation of these sanctions, of course, we will retaliate," he added.
The president also mentioned that this decision by the U.S. had emerged from internal disputes between various rival actors and institutions in Washington: "We regret that the polarization in U.S. domestic politics has had negative consequences for us and that some groups abuse the developments in our country for the sake of their own interests in damaging Trump," Erdoğan said in the interview. He added that Trump was unfortunately not the only decision-maker and that his personal relationship with the U.S. president was not enough to change the situation. Erdoğan also pointed out that this move did not comply with the spirit of the alliance and that it was a violation of the agreement regarding Syria reached with the U.S. on Oct.17.
Turkey has been critical of its NATO allies for failing to recognize its security concerns on the Syrian border and leaving it alone in its fight against terror threats. Some NATO diplomats worry that Turkey, a NATO member since 1952 and a crucial ally in the Middle East, has increasingly acted unilaterally.
Last Update: Dec 20, 2019 2:27 am